CD Projekt RED has just announced on Twitter that the company has been a victim of a targeted cyberattack on its internal network. The attacker group and individual seems to have gained access to the company’s sensitive data, after hacking into CD Projekt’s servers.

The company’s internal systems have been compromised. The hacker group claims to have the source code of the company’s most popular titles, including Cyberpunk 2077, The Witcher 3: Wild Hunt, Gwent, and an unreleased version of The Witcher 3 game.

It appears that the computer that was compromised is a “Perforce server” for data sharing and versioning.

The hacker group, who has the current possession of the files, has encrypted them and demanded to be contacted immediately within 48 hours, most likely asking for a ransom. Else, the hacker group has threatened to release all the sensitive information, including the game’s source code to the public.

The group also claims to have confidential documents related to CDPR’s financial accounting, administration, legal, HR, IR, and more. CDPR however has announced that it will not give into the demands of the attacker group, nor negotiate with the actor.

The company has reached out to authorities like law enforcement, IT forensic specialists, and also the president of the personal data protection office.

Below you can see the screenshot of the plain-text note left on the company’s server by the attacker group.

Here is the full official statement as issued by CDPR: 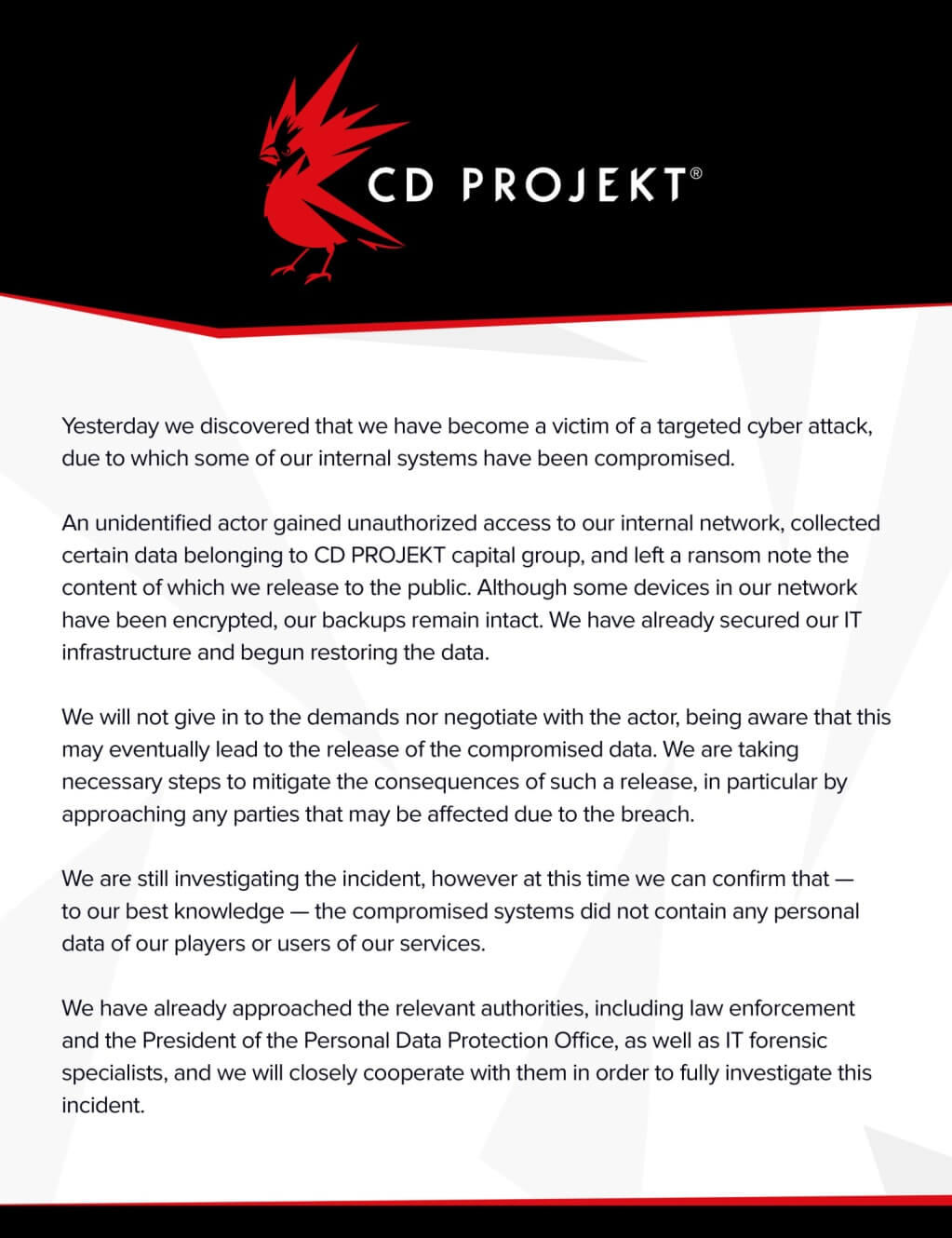 Just recently, CD Projekt Red’s Customer Support team issued a warning on Twitter against using Cyberpunk 2077 game mods from unknown sources. However, CD Projekt RED released a brand new update and patch version 1.12, which addressed this vulnerability that could be used as part of a remote code execution.

Back in December 2020, Rosen Law Firm filed a class action lawsuit against CD Projekt. The lawsuit was aimed to recover damages for CD Projekt investors under the federal securities laws.

According to the lawsuit, defendants throughout the Class Period made false and/or misleading statements to investors. CD Projekt seems to have been under hot water lately, because a total of five separate U.S.-based law firms have already filed class-action lawsuits against the company for possibly misleading investors.

But this doesn’t stop here, because if all that didn’t cause enough damage to CD Projekt’s reputation, Poland’s Office of Competition and Consumer Protection  has also opened a formal investigation into CD Projekt S.A. for Cyberpunk 2077’s performance.

Cyberpunk 2077 is now available on the PC, PS4, Stadia, and Xbox One, and is in development for PS5 and Xbox Series X/S as well. It will be interesting to see how CD Projekt handles this whole situation.