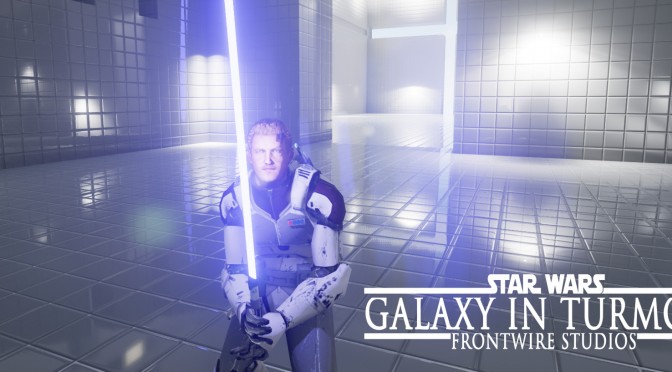 Back in March, we informed you about a new fan-made Star Wars game, inspired by the Battlefront series, called Galaxy in Turmoil. Galaxy in Turmoil was a multiplayer game that was meant to be distributed for free via Steam. However, it appears that Lucasfilm stepped in and decided to shut down this project.

And to be honest, this was to be expected. Galaxy in Turmoil gained a lot of publicity and – as you most of you may have guessed – Frontwire is not allowed to use the Star Wars IP in its game (even if we’re talking about a free game). Yeap, that’s copyright infringement and we all saw that coming.

“On Wednesday June 22, 2016, we received a letter from Lucasfilm requesting that we halt production of Galaxy in Turmoil with any Star Wars related IP at once. Rather than laying down at the first sign of trouble, I requested a meeting with the Lucasfilm executives to discuss our project and to find some common ground to work with. Honestly, I didn’t expect too much negotiation to occur. But much to my surprise, executives at the top of Lucasfilm agreed to meet. A week later, that meeting took place.”

The reason LucasFilm decided to send a C&D letter is quite obvious. Given the fact that Galaxy in Turmoil is basically a fan-made Battlefront game, EA did not want Frontwire to continue the game’s development as it could take away attention from its Battlefront franchise.

“During our meeting, there was a fair share of both lighthearted and serious moments. LucasFilm informed me that although they would of been open to the idea of negotiating a license for Frontwire to work on the Star Wars IP, that they are not able to due to their contract with Electronic Arts (EA). I was told that Lucasfilm had already spoken with EA about Galaxy in Turmoil and that EA expressed no desire in letting our project continue. Their main concern was due to the possibility of Galaxy in Turmoil taking away attention from their Battlefront franchise. I tried to pitch the idea about putting Galaxy in Turmoil behind EA’s paywall but was told that EA had previously rejected that proposition as well. Due to their exclusive contract with EA, Lucasfilm was contractually obligated to deny our request for the use of the Star Wars IP for Galaxy in Turmoil based on EA’s decision. We tried to reach out to EA directly for more information, but we have so far gotten no response.”

To his credit, Tony does not hold any grudge against Lucasfilm or EA for sending that C&D letter.

“Let me stop for a moment. I do not for a second hold any grudge against Electronic Arts and/or Lucasfilm, and neither should our community. The Star Wars brand is a highly valuable and lucrative brand. I would expect nothing less from Lucasfilm than to do everything they can to protect and preserve their intellectual property. As for EA they have an extremely expensive and profitable production contract with Lucasfilm. Likewise, EA has done what they felt they needed to do and if I were in the same position, I hope I would also do anything to protect my golden egg. While I do wish EA would realize that backing a free fan game would actually be an effective way to help and promote their brand, their decision is final, and we as both a business and as a community must respect that.”

Tony concluded that a new game will rise from Galaxy in Turmoil’s ashes. Basically, think of it as Battlefront without any of the Star Wars references (new characters, locations, weapons, etc).

“Our highly publicized project as you have come to know it will no longer be a Star Wars game inspired by Battlefront. However, there is a new hope (Sorry, I had to slip that in!). Upon speaking with Lucasfilm, they informed us that they have no issue with a Battlefront inspired game that is not using the Star Wars IP itself. Regardless of what some have said, all of our code, sounds and many other non-Star Wars assets have been created in-house, which means they are indeed owned by us.”

Frontwire will launch a crowd-funding campaign once it has a fully playable demo (consisting of a single player mission & at least two multiplayer maps with a single game-mode).

This new game will feature both single-player and multiplayer modes, will support 64-player battles and will allow ground-to-space combat.