Violator released a new version of his handful tool, FXAA Inject Tool. FXAA Post Process Injection – as is its full name – injects different post processing methods to games, like Anti Aliasing, Sharpening, Bloom, Color Tones etc. FXAA is a cost effective Anti Aliasing process done in one single pass, which means that it has virtual no impact on the overall system performance. That allows us to add additional passes and still keep the system requirement extremely low.

FXAA Inject Tool even comes with a graphical user interface, which only needs to run if you want to to make quick adjustments. Those interested can adjust pretty much everything, from the Sharpenning filter to the Sepia and Tone Mapping that will be injected. 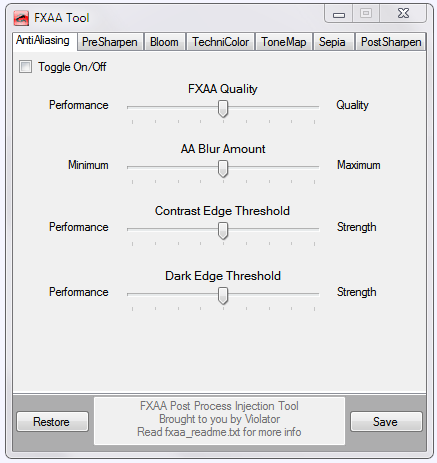 The new version of this tool adds a new HDR shader and can be downloaded from here.