Yesterday, Konami announced that its PES series will be now called eFootball and will be a free-to-play game. However, Konami has now revealed that its F2P soccer game will not be coming without any Offline Modes. As such, players will have to wait and purchase the game’s Offline Modes (like Master League) whenever they become available. And no, they won’t be available at launch.

Konami also claims that it is improving the new engine the game uses so that it can take advantage of each platform. eFootball will be using Unreal Engine, and since it will support cross-platform, we can safely say that all versions will play the same. However, the next-gen console versions will look better than the mobile and the current-gen/PC versions. In short, expect better graphics on next-gen consoles, but not next-gen gameplay features or mechanics. 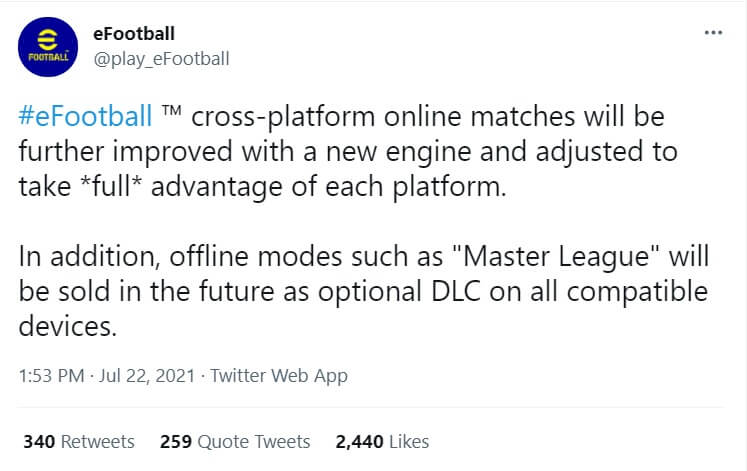 This further proves that Konami wants to capitalize on the MyClub group. This is the main reason why eFootball went free to play and why it won’t be offering any Offline Modes. And, since these Offline Modes won’t bring any money via micro-transactions, Konami will be selling them as DLCs. Still, the fact that major features like Master League may miss 2021 and come out in 2022 paints a really terrible picture regarding the game’s direction.

Don’t get me wrong, eFootball’s Master League DLC will be still cheaper than a full-fledged game. However, its exclusion from the game’s launch proves that it is an afterthought (at least for now).  Not only that, but Konami deliberately did not talk about this when it announced that eFootball would be a F2P game.

Lastly, and given how Konami is now treating this franchise, I don’t really expect an overhauled ML mode. Instead, we’ll get the same ML mode we’ve been playing these past couple of years (with some minor tweaks and adjustments). Only this time, it will come 4 or 5 months after the game’s release.

eFootball will release this Autumn!