DOOM was released almost three months ago and according to SteamSpy’s data, id Software’s first-person shooter has sold one million copies on Valve’s distribution service, Steam. 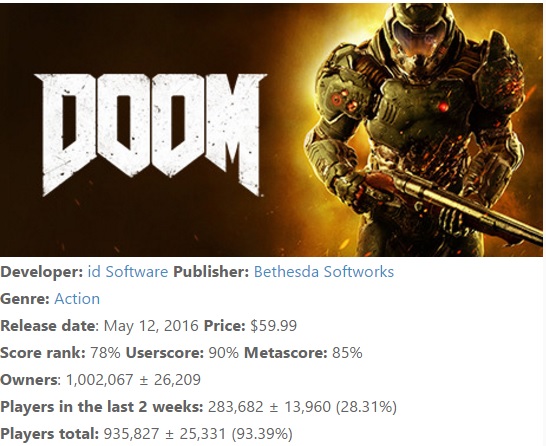 To its credit, DOOM is a fantastic action FPS that pays tribute to its classic predecessors. id Software has managed to create an amazing first-person shooter that also looks and runs great.

As we wrote in our PC Performance Analysis:

“DOOM is one of the most optimized PC games of 2016. The game looks beautiful, features one hell of options to tweak, comes with spectacular built-in performance metrics, sports proper on-screen keyboard indicators, and runs superbly on the PC platform”

Moreover, DOOM showcased the benefits of Vulkan. Thanks to it, a lot of scenes run better, even on NVIDIA’s hardware (as those scenes were limited by the increased number of draw calls).

In fact, we witnessed a 60fps performance boost in some scenes while testing Vulkan.