In order to celebrate the 10th Anniversary of the Divinity RPG series, Larian Studios released today Divinity Anthology: Collector’s Edition. Divinity Anthology Collector’s Edition includes both DRM-free and Steam multi-lingual versions of Divine Divinity, Beyond Divinity and Divinity II: Developer’s Cut; two soundtracks featuring the best works of Kirill Pokrovsky, Divinity’s famous composer, as well as outtakes and rare pieces that never made it into the games; a 130 page Developer’s Journal that tells the story of Larian’s last 15 years in the games business accompanied by many pieces of unreleased art; an old-school sticker set offering skulls, dragons and princesses to customize your phone or notebook; two double-sided posters for your bedroom or office; and two codes for unique in-game items for Divinity: Dragon Commander and Divinity: Original Sin, both of which are expected to be released in 2013.

Only 25.000 copies of this rare package have been produced, and these are now on their way to retail stores in Australia, Austria, Belgium, Denmark, Finland, France, Germany, the Netherlands, Norway, Poland, Russia, Sweden, South Africa and the United Kingdom, where recommended retail prices are set at around €29.99 (so we don’t really expect the stock to linger). A small run of the Divinity Anthology Collector’s Edition is also available for order directly from its official website, with every box signed personally by the development team.

Finally, the Divinity Anthology will also become available digitally – with Steam and Larian Vault releases in the works, e.t.a. later this month. GOG.com will be offering Divinty II: Developer’s Cut. 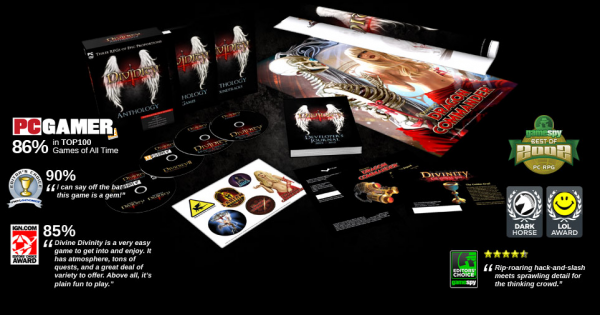