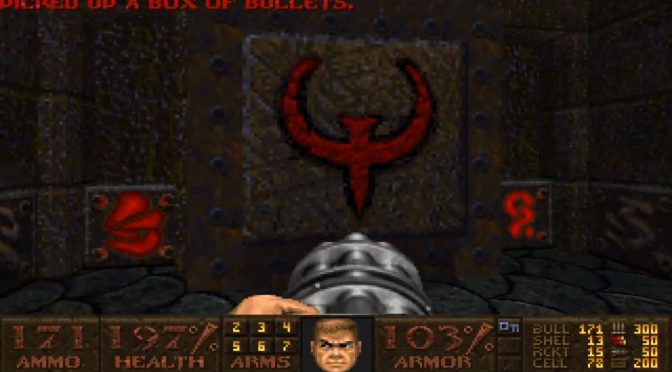 Basically, this mod borrows all the Quake textures in order to create some levels that have the same visual style and aesthetics with id Software’s first real 3D first-person shooter. The end result is really cool and the mod supports both single-player and co-op modes.

“Quake textures have been used in custom Doom WADs for quite some time, since 1999 in fact, when Derek “Afterglow” Mac Donald released Q1TEX. And I had played around with them a bit, but I was dissatisfied with the results.

In order to make Q1TEX work with vanilla Doom, some textures had to be resized to fit Doom’s limitations, and additionally a lot of colour depth was lost when the Quake textures were converted into Doom’s palette, rendering them mostly brown and grey.

It occurred to me that if you were use Boom format instead (a late 90s upgraded version of Doom) and a custom palette, then it would be possible to use the Quake textures at their original sizes and in their original colours.

So created a custom palette that had enough of the Doom colours to properly render the Doom II sprites, while at the same time had enough of the Quake colours to properly render the Quake Textures. So I compiled them all together and that was the beginning of BOOMQTEX. But to test that everything worked, of course I had to build some maps, which was how Dimension of the Boomed itself got going.”

This mod is also compatible with QC: Doom Edition; a mod featuring all the weapons from Quake Champions as well as a mix of monsters from Doom, Quake, Quake 2 and Quake 4. As such, we strongly suggest using that too in order to get better Quake-vibes from it.

Dimension of The Boomed - Map 06