Crytek’s nanosuit FPS appeared on the PC in 2007. Although it was a graphical masterpiece and was criticized by some PC gamers for its system requirements, it was profitable and made the company realize that it had something good on its hands. But did you know that Crytek was also developing – back in 2008 – a game that looked similar Naughty Dog’s The Last Of Us?

From what we know so far, Crytek’s cancelled game was referred to as Project Jelena. Jelena is actually the girl that has appeared in various tech demos for CryEngine 3. In addition, the Forest map that was featured in one of CryEngine 3’s SDK was actually an early level from Project Jelena. After all, Cevat admitted – back in 2009 – that the Forest map was part of a cancelled prototype project.

Not only that, but Maciej Kuciara had previously posted on his website some concept arts from Project Jelena. These concept arts were under the ‘Cancelled Crytek Game’ category and as we can see, two main characters – a man and a girl – would be working together. Our guess is that the player would control the male character and would have to protect and escort the girl to safety. In one particular concept art, we can see the main characters hiding from a bunch of people (suggesting that the game would feature survival elements), while on another we can see a destroyed car with two characters searching for survivors.

It’s pretty obvious that there are similarities to Naughty Dog’s The Last Of Us (especially when looking at the following concept arts). Funny thing is that Maciej Kuciara joined Naughty Dogs after his partnership with Crytek. We don’t know whether Kuciara shared his thoughts on Crytek’s cancelled game with Naughty Dog or not, however it seems peculiar that both of these games – that had Kuciara involved – look so similar.

All in all, Project Jelena looked interesting. We don’t know why it was cancelled, but we’d certainly love to have seen that game come to fruition.

Enjoy the concept arts. We’ve also included the CryEngine 3 tech demos – in which Jelena makes an appearance – as well as a walkthrough of the Forest map! 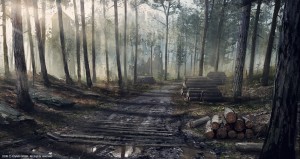 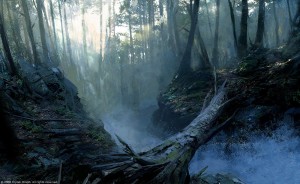