CD Projekt RED has issued a statement about the lack of an online stream for the public gameplay demo of Cyberpunk 2077 that will be present at E3 2019. According to the company, this decision was made in order to further hype its title and increase interest for the upcoming Gamescom 2019 gaming event.

“The reason is we want to make the most our of the months of work we put into the demo and first showcase gameplay live at E3 and gamescom. Releasing gameplay right away would make the gamescom presentations pointless and would significantly limit our chance to build hype.”

Basically, CD Projekt RED confirmed what many of us suspected; that this was done for marketing reasons and nothing more. At least, though, we can give props to the team for being honest with its fans. Furthermore, CD Projekt RED aims to make this gameplay demo available to everyone during Gamescom 2019.

“Why do we need to build hype? To get more gamers interested in CP2077 and, hopefully, convince them to give it a go. We are putting our hearts and souls into making CP2077 a great game and we would like as many gamers as possible to find out about it and experience its amazing story. Also, hype can turn into sales (after all, we are not a charity), and good sales allow us to grow, take creative risks and deliver new, great games for you to enjoy.”

In short, things will be similar to what CD Projekt RED did last year with the first gameplay demo for Cyberpunk 2077. Whether someone will leak any gameplay footage from this public demo prior to Gamescom 2019 remains to be seen. 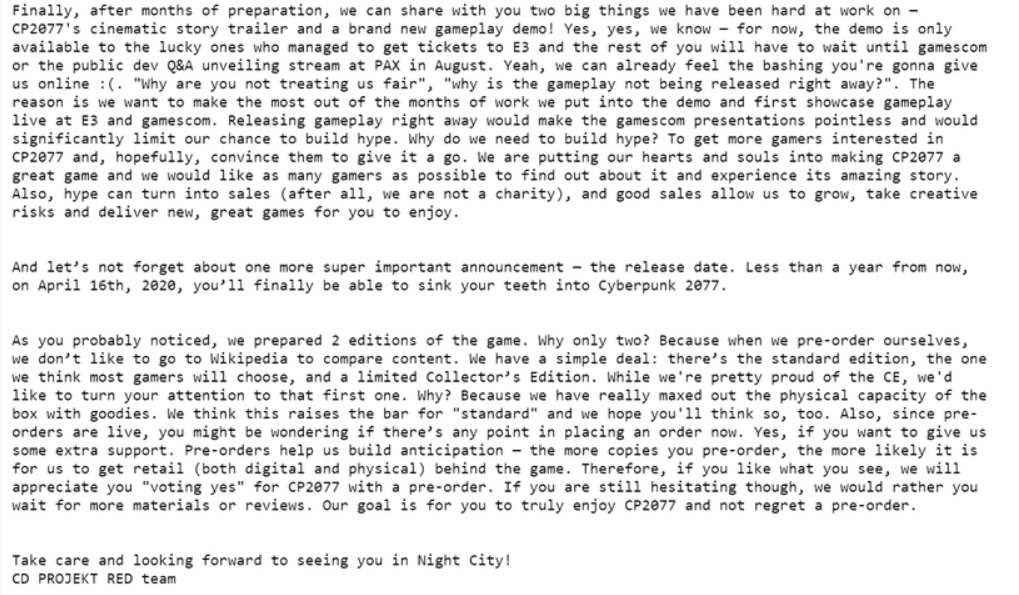