AMD recently announced its entry-level budget A520 motherboard chipset for the 3rd Gen Ryzen ‘Matisse’ processor family, as well as the Athlon and Ryzen 4000G processors based on the ‘Renoir’ silicon. But similar to the B550 Chipset, it does not offer support for the Ryzen 3 3200G and Ryzen 5 3400G processors based on the ‘Picasso’ silicon, as well as other older 2nd and 1st Gen Ryzen CPUs.

This is an entry-level A520 chipset which doesn’t offer support for CPU overclocking, which isn’t a very big deal, since the Ryzen 3000 series Matisse processors don’t have that much manual overclocking headroom to begin with. The A520 gaming motherboards are low-cost budget offerings, and come with a modest power delivery system, which is sufficient for stock CPU usage/performance, but not for overclocking.

Most importantly, these A520 entry-level motherboards lack PCIe 4.0 support unlike the new B550/ X570 boards, sticking with PCIe 3.0, so you cannot use the latest PCIe 4.0 M.2 SSDs on this board. Even the PCI-Express x16 and M.2 NVMe slots wired to the AM4 SoC are limited to PCIe Gen 3.

The AMD A520 chipset is now available to purchase from major motherboard manufacturers worldwide. The price of these boards is within the sub-$100 USD range, since these are budget offerings. In addition to providing support for AMD 3rd Gen Ryzen Desktop Processors, the AMD A520 chipset offers a path for future upgrades as well, with planned support for future Ryzen CPUs based on the new Zen 3 architecture. The A520 is meant as a direct replacement/upgrade over the low-end A320 chipset.

AMD’s board partners have also released their respective A520 motherboards, like ASUS, ASRock, MSI, Gigabyte and BIOSTAR. I will focus only on ASUS in this article. ASUS has confirmed that their A520 motherboards will offer support for the upcoming ‘Cezanne’ Ryzen 5000G APUs. An official ASUS slide shows the A520 chipset to offer support for the latest Renoir-based CPUs, aka the Ryzen 4000G lineup based on the Zen 2 architecture, alongside support for the upcoming Cezanne Ryzen 5000G Zen 3 APUs, and also future Vermeer Ryzen 4000/5000 Zen 3 series of desktop processors.

The Vermeer Ryzen 4000/5000 Zen 3 series of desktop processors are expected to release later this year, whereas the Cezanne lineup will land up in shelves next year. Another interesting piece of information has been revealed from the official ASUS slide. Surprisingly, the AMD B450 and X470 motherboard chipsets aren’t going to support the new Zen3-based processors, however, following the recent community backlash, AMD already made the decision to offer support for these chipset platforms via a vendor BIOS update. AMD did confirm before that Zen3 support will require a special BIOS upgrade provided by the respective board partners, but apparently ASUS has no plans to provide such support, as evident from the slide.

According to AMD, the company said that it ran into some ROM size limitations, when trying to push the AGESA microcode for all the older CPUs. As per AMD, the flash memory chips that store the BIOS have capacity limitations, and not all AM4-based motherboards feature dual-BIOS chip design (mostly found on the more expensive and high-end boards). But AMD will give permission to ODM partners like ASUS, MSI, Gigabyte, Dell, HP, Lenovo, and others etc. to enable this feature, however, it will be up to the ODM partner to actually implement it. AMD was under a lot of criticism these past few months, since the company had originally promised that it would support the AM4 platform all the way from 2016 through 2020. But many assumed that this meant any AM4 platform based motherboard would be able to accept any processor from 2016 to 2020, including the upcoming Zen 3 SKUs. The chipmaker actually had a change of heart and is now going to offer Zen 3 support based on the feedback they have received, and have thus decided to enable support on the AMD B450 and X470 boards once the right beta BIOS is installed.

The current Renoir Ryzen 4000 APU family is based on the Zen 2 CPU architecture, having Vega GPU cores. The CPU is fabbed on the 7nm process node. The Ryzen 5000 Cezanne APU lineup will be a direct successor to Renoir. These are rumored to be based on the ZEN 3 architecture. These might target the high-end notebook (FP6), and mid-range desktop APU segment (AM4 socket).

The Cezanne family will be based on two segments, the high-performance Cezanne-H and the low-power Cezanne-U series. These processors will be based on the FP6/AM4 package, the BGA platform. The GPU powering the Cezanne APU is going to be an enhanced version of the existing Vega/GCN architecture silicon. The Cezanne APUs should be fabbed on the TSMC’s N7 process node, but we don’t know for sure. These are expected to hit the market by 2021.

The Ryzen Vermeer 4000 series of desktop CPUs on the other hand will target both the mainstream and high-end markets. Unlike the Ryzen 4000G series, which are based on Renoir silicon, Vermeer processor will not have any integrated graphics. However, they will use the new upcoming refined and overhauled Zen3 architecture, so we can expect them to be more powerful. 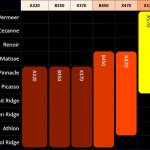 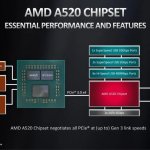 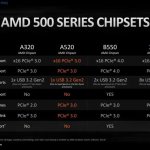