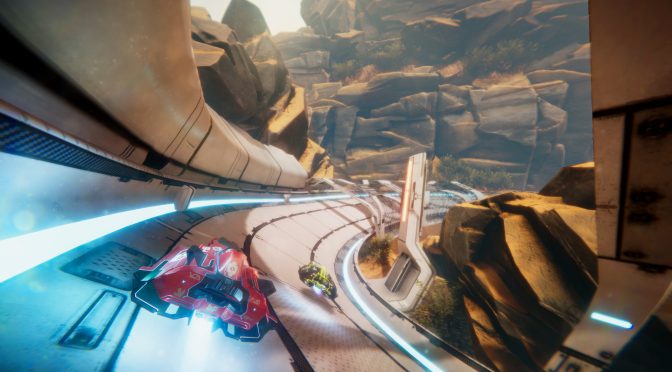 Antigraviator is described as a sleek new take on the anti-gravity racing genre. Players can use traps, power-ups and boosts to overtake their opponents and  dominate the track. The game also aims to deliver the fastest racing experience out there.

In Antigraviator, players will race on exquisitely detailed stages, full of light-speed danger, chaos and mayhem. Gamers will guide their customizable Grav in three gameplay modes across four different worlds with three tracks each. These dynamic courses come to life, while pushing the power of Unity to the limit.

Players can challenge their friends in the fiercely competitive
multiplayer modes, either online or in split-screen mode. Players can also earn special ranked skins via the worldwide learboard.

Gamers can sabotage their fellow racers by activating hover mines,
damaging the environment to create a rockslide, causing tunnels to
collapse, firing missiles from rocket launchers along the track and
many more fiendish tricks.

“With Iceberg Interactive on board as publisher of our first game, Cybernetic Walrus is getting its big tusks.”

“We’re huge science-fiction fans, as you might have guessed from our portfolio. A futuristic racing game definitely fits the bill for us and we couldn’t be more excited to publish Antigraviator.”