It appears that the gap between NVIDIA and AMD widens as more and more fans are equipping their PC systems with NVIDIA’s GPUs, despite the fact that AMD has recently released a brand new GPU. According to Mercury Research’s latest data, NVIDIA has jumped from 77% of the discrete GPU market in Q4 2014 to 82% in Q2 2015.

This basically means that AMD has dropped from 23% to 18% (of the discrete GPU market). In other words, 4 our of 5 PC users prefer NVIDIA’s graphics cards over AMD’s.

Back in April, we reported that 3 out of 4 PC gamers preferred NVIDIA’s GPUs over AMD’s GPUs. And according to the latest reports from Mercury Research, this has been increased to 4 out of 5. 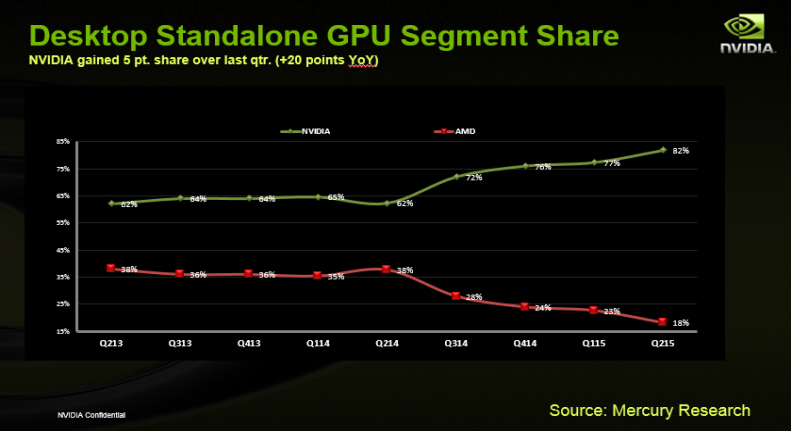 And to be honest, this isn’t a big surprise. A lot of PC gamers were looking forward to the FuryX; a GPU that was advertised to be a huge deal. Well, the FuryX came and what PC gamers got was a new overpriced GPU that – in some scenarios – was not as fast as NVIDIA’s GTX980Ti.

And while the FuryX is definitely not a ‘failed’ product, it cannot come close to what the Radeon 9700Pro achieved back in the days.