Now, a French retailer, “Materiel.net” has listed these processors on its website, including the specs and the estimated selling price. But do note that this French retailer’s pricing is very high as compared to other European online stores, so these are “inflated” prices.  The final product sold on other retailers should not be costing this much.

The listing by this French retailer does seem to reflect/confirm the original leaked specs posted on Chiphell Forums. But some of the 3DMark entries for both these upcoming processors:  the Ryzen 9 3900XT and 3800XT show the clock speeds to be 100Mhz lower, coming via @_rogame (first entry), and second entry.

The 3800XT is an 8-core CPU with 300MHz higher clock speed as compared to the plain “X-model” SKU. The Ryzen 5 3600XT which is a 6-core CPU with a turbo clock around 4700 MHz, would be the cheapest in this ‘Matisse refresh’ lineup of processors.

AMD’s Ryzen 3000 XT series, aka “Matisse Refresh”, are expected to be announced on June 16th 2020, with AMD planning to sell these new processors around July 7’th.  All three AMD Ryzen 3000 ‘Matisse Refresh’ CPUs have higher base clocks than Intel’s current 10th Gen desktop CPUs as well, assuming these findings are accurate.

According to rumors the “boost algorithms” for these new CPUs are more finely tuned.  So you can expect a “5-10%” performance improvement over existing Ryzen SKUs.  AMD had to release several “fixes” in the past for the previous gen Ryzen lineup, to make sure the “advertised” clock speeds could be achieved easily on most of the systems.  So we need to wait till these CPUs hit the shelves to confirm how much base/boost clock speed values these new processors can actually offer.

According to Videocardz’s internal sources, the Ryzen 5 3600XT CPU should cost ’28 USD’ more than the previously released Ryzen 5 3600X SKU. The Ryzen 9 3900X is currently selling for €419, Ryzen 7 3800X for €319, and lastly the Ryzen 5 3600X for €195. But I would expect AMD to offer these “XT” variants at a lower price than their previous counterparts, else, there would be little reason for Gamers to buy these new “refresh” SKUs. 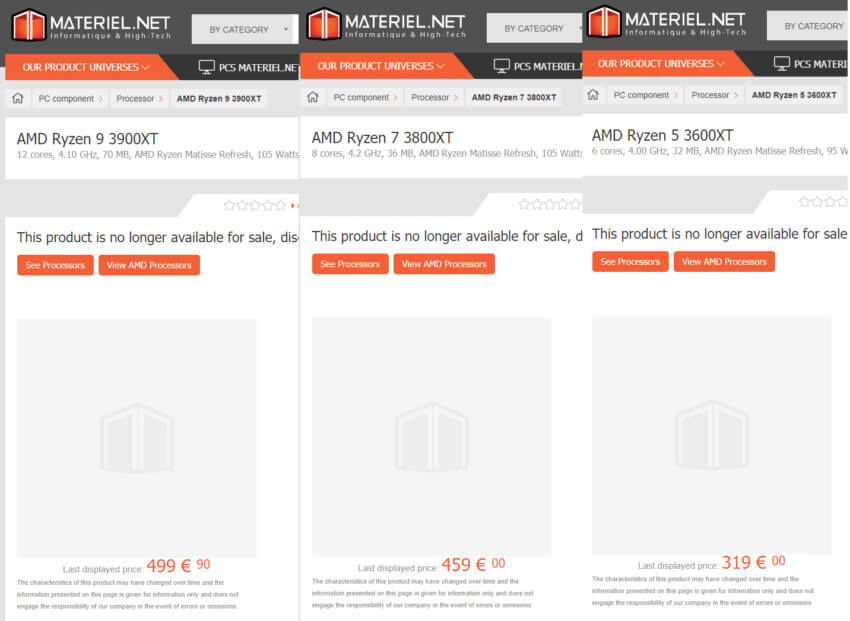