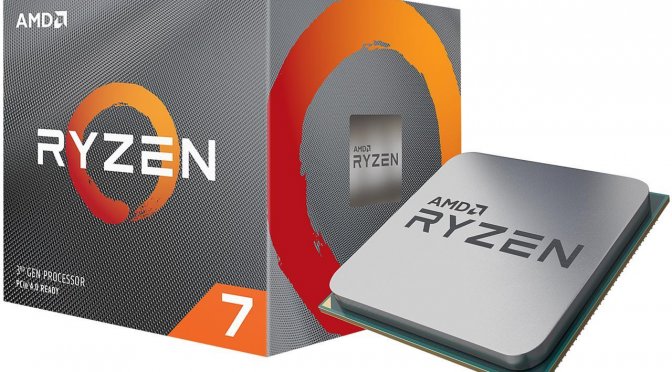 AMD recently announced the Ryzen 3000XT series of SKUs, the Ryzen 3900XT, 3800XT and 3600XT respectively, which has led to the price drop of their previous counterpart X Models, including the Ryzen 7 3700X CPU. Regardless, I don’t expect the new XT CPUs to offer a very huge  gain in performance over the standard Ryzen 3000 CPUs so buying one of the X model SKUs at a lower price would be a wise investment for any gamer who plans to upgrade, in my opinion.

The Ryzen 7 3700X is still an awesome chip with eight CPU cores and 16 threads. Naturally, it supports the AM4 CPU socket. It also has a base clock speed of 3.6 GHz with a max boost frequency of 4.4 GHz.

Moreover, it features 32MB of L3 cache, 24 PCIe Gen 4 lanes, and support for dual-channel 3200 MHz DDR4 RAM. Users should pair it with an AMD X500-series motherboard to fully take advantage of PCIe 4.0. This processor has a 65W TDP (Thermal Design Power) and includes a Wraith Prism cooler with RGB LED lighting. Please note that it does not have an integrated GPU, so you’ll need a “dedicated” graphics card.

Ryzen 7 3700X is a brilliant piece of hardware. With a TDP of just 65W, this chip is capable of delivering raw performance that would take other processors much more power to equal. The current reasonable price tag is just a bonus. Without a doubt, the Ryzen 7 3700X is the poster child for the AMD Ryzen 3rd Generation processors on the consumer level.

Even though this CPU has inherited its predecessor’s 8-core, 16-thread setup, it also delivers a much better performance at a lower power consumption than the Ryzen 7 2700X. That’s mainly due to its new 7nm manufacturing process. It may not come close to surpassing the Ryzen 9 3900X, especially in multi-threaded workloads, but it delivers that same raw performance for those who are on a limited budget.

With the AMD Ryzen 7 3700X, you’re getting a much more affordable processor that also needs less robust cooling. This chip walks a fine line between expeditious efficacy and power efficiency. In fact, it’s the only X-series chip above the Ryzen 5 3600 to be squeezed into a 65W TDP envelope. That’s all thanks to the 7nm process node allowing for much greater efficiency over its 12nm or 14nm predecessors.

The Zen 2 architecture is more than a process node shrink, it’s an entirely overhauled architecture. AMD has increased IPC by a whopping 15% with Zen 2, achieved through various architectural changes. Notable changes include: ‘front-end advances’, ‘doubling floating point’ performance, and ‘reduced effective latency to memory’. Grab this offer while you still can. This is assuming you are out in the market for an upgrade.