It’s been a while since we last got excited about games/benchmarks that were included in GPUs packages. You see, most of the times, the bundled games were quite old and outdated. Well, that’s about to change with AMD’s Never Settle Bundle suite. Those of you who decide to buy one of AMD’s cards (from 7700 and up) will receive a 20% discount for Medal of Honor: Warfighter and a number of modern-day games for free.

AMD has promised some interesting new bundles, with Bioshock Infinite and the new Tomb Raider game being hinted as titles that could be yours for free (provided you buy an AMD GPU card).

In other news, AMD has promised a significant performance boost with its upcoming Catalyst 12.11 drivers that will be included in the ‘Never Settle Bundle’. 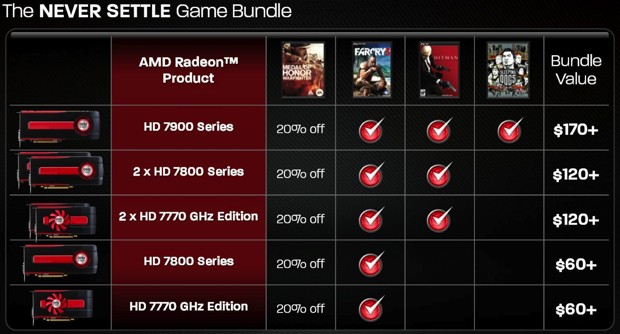