According to a recent leak coming via @momomo_us, AMD is prepping to launch two brand new Zen 3 Ryzen 5000 desktop CPUs for the OEM market segment, the non-X Ryzen 9 5900 and the non-X Ryzen 7 5800, respectively. But before continuing, you should keep this in mind that both of these chips are targeted towards OEMs and pre-build desktop PCs, and will not be sold separately or hit the retail shelves anytime soon.

Though, AMD can have a change of heart if the company feels these new SKUs might also get a positive reception and strong demand from gamers and the DIY market as a whole. But as of now, these are only targeting OEMs.

An Original Equipment Manufacturer or OEM is a company that manufactures and sells products or parts of a product that their buyer, another company, sells to its own customers while putting the products under its own branding. For example, DELL, HP, iBUYPOWER, Gateway, and others.

According to previous leaks, it was rumored before that AMD is readying two brand new non-X Ryzen 5000 Desktop CPUs for the OEM segment based on the Zen 3 architecture, as revealed by Patrick Schur and Momomo_US. Now, we some confirmation on the specs of these new processors.

The CPUs will offer the same core configuration as their ‘X’ series brethren, but the main differentiator would be the clock speed frequency value and TDP/thermals. Though, these non-X SKUs sport a 100 MHz lower boost clock frequency than the X counterparts, based on the data leaked by Momomo_US. 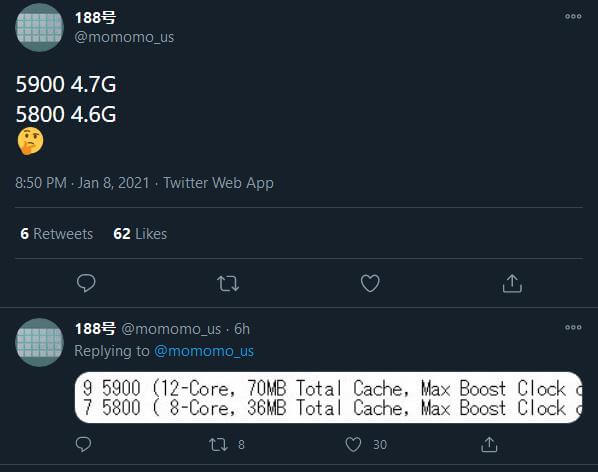 We can also expect a slightly lower price point for these CPU entries. If we want make an educated guess, then we can speculate the AMD Ryzen 9 5900 to cost around $499, USD while the Ryzen 7 5800 could end up for roughly $399 USD.

These processors will launch for OEMs as part of their pre-build desktop PC configs in the coming weeks/months.