The patent application is for a machine-learning chiplet, which is going to be integrated into a package coupled with GPU cores as well as the cache, in order to create an “APD” or Accelerated Processing Device in AMD’s terminology. GPU cores here might refer to the upcoming RDNA 3 architecture, and the cache unit most likely being a version of AMD’s Infinity Cache design, if taken as an example.

Moreover, the APD described in this patent has a chiplet of both ML Accelerator as well as a cache on the same chiplet.

Through the inclusion of such a chiplet, AMD might be able to add some machine-learning capabilities to several of their designs in a modular way. Could this be AMD’s answer to Nvidia’s DLSS technique? I guess we will come to know about this later on when it gets implemented.

According to the patent’s description, different process nodes are being mentioned for each type of chiplet. This implies AMD might use different manufacturing technologies in this chiplet-based design.

Moreover, the memory modules of each MLA can be dynamically configured to be used as a cache (i.e. infinity cache), or as a directly accessible memory, depending on the scenario.

Based on the patent’s description, the chiplet is embedded in the substrate and can be used both as a silicon bridge, as well as an accelerator. As mentioned above, this design will also allow for on-the-fly usage of cache, or as a directly-addressable memory.

As the patent Abstract reads:

Machine learning is a rapidly advancing field. Improvements to hardware for machine learning operations such as training and inference are constantly being made. The methods provided can be implemented in a general purpose computer, a processor, or a processor core.

Such processors can be manufactured by configuring a manufacturing process using the results of processed hardware description language (HDL) instructions and other intermediary data including netlists (such instructions capable of being stored on a computer readable media).

The results of such processing can be maskworks that are then used in a semiconductor manufacturing process to manufacture a processor which implements features of the disclosure. 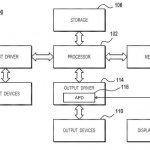 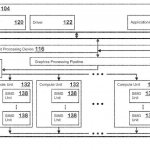 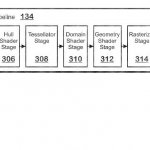 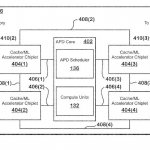 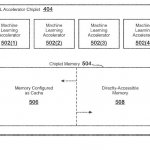 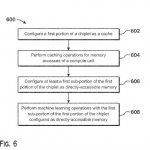