Our reader Sid Spyker has informed about some exciting news. Deep inside us, we all know that GTA V will – eventually – come to the PC, right? And it seems that Rockstar may announce this version sooner than later. According to Germany’s Biggest Online Retailer for Video-Games, GamesOnly.at and Amazon Germany, GTA V is coming to the PC.

Although there is no official word yet – and no release date for it – Amazon Germany and GamesOnly.at list GTA V for the PC. Moreover, GamesOnly.at – spotted by Gamepur – has leaked GTA V’s Special Edition which will include a SteelBook with exclusive Artwork, the World map, Stunt-Planes challenges, Online-Store concessions, Bonus outfits, Bonus Tattoos, Special Abilities Booster and Exclusive weapons.

As always, take it with a grain of salt but as with all GTA titles, GTA V seems destined to hit the PC. Naturally, it will take around 5-6 months until Rockstar releases it. Still, GTA V PC is almost a given. Unless of course both retailers are wrong and Rockstar pulls us another RDR. 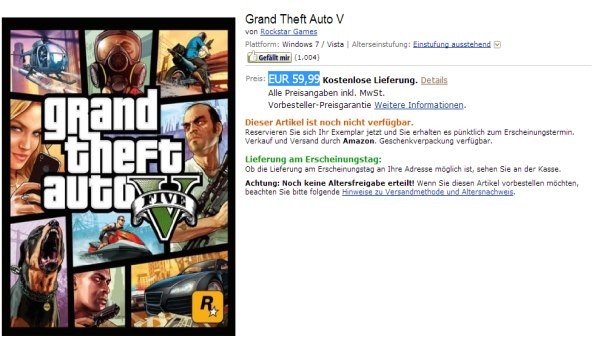