We all know by now that Scalping has become one of the most frustrating things to happen this year, which in turn has affected and disrupted the whole PC Gaming hardware and the console gaming market as well. Scalpers had the opportunity this year to buy a product for the sole purpose of just making a profit off of it, and more specifically for selling it at a much higher price than the initial MSRP.

Due to the Covid-19 global pandemic, many customers, gamers, enthusiasts and others have been forced to stay indoors, work/play from home, and so because of this the demand for the latest gaming and other hardware accessories has seen an unprecedented growth this year.

Buying a new GPU, CPU, gaming console, or any other related hardware has been nearly impossible at least at the MSRP rate set by the companies, be it AMD, INTEL, NVIDIA, Microsoft, Sony, DELL and others.

Because of this global trend, recently one Data Engineer Michael Driscoll from DEV.TO decided to do an in-depth analysis to see just how much money these scalpers have made off this year. Driscoll wrote a script to scrape all of eBay’s sold listings for the gaming hardware, and graph them accordingly to get an insight into this whole scalping process.

The program “eBay Sold Price Scraper” was aimed to grab sold listings on EBAY for the latest AMD and Nvidia products, as well as for the Xbox Series S/X and PS5 Disc/Digital new gaming consoles.

Scalping actually works based on the economy’s supply and demand ratio; and when the supply is low and demand is too high, scalpers can make huge profits, and take undue advantage of this market trend.

Coming to the statistical analysis done, Michael Driscoll’s graphs aren’t based on actual prices, but rather on percentages, with each product’s MSRP being taken as the baseline. This makes reading these graphs and charts a bit easier.

When it comes to the RTX 3090 GPU, the scalpers were selling the card at 220% above the MSRP straight away. After that, the card is still selling for around 140% above MSRP, which is ridiculous for such a high-end flagship card.

Nvidia’s RTX 3070 and RTX 3060 Ti GPUs on the other hand were the worst offenders, since these are mid-range cards, and the price/performance ratio comes into play here as well.

According to the data, the RTX 3070 GPU started selling immediately at 180% over the MSRP on eBay, and the same goes for the RTX 3060 Ti card as well, which was selling at 165% above its targeted MSRP. The selling price of both these cards has not gone down since then. 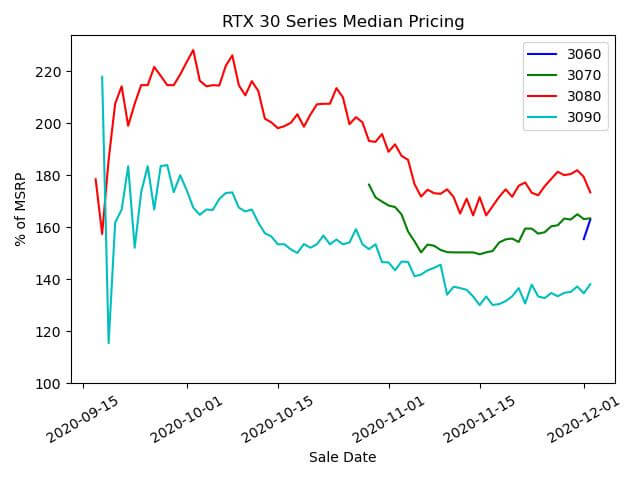 Next up is AMD’s RX 6000-series GPUs based on the RDNA 2 architecture. This lineup has suffered an even worse fate than Nvidia’s counterparts, due to severe shortage of these GPUs at retail shops worldwide. The situation at launch was even more ridiculous for AMD GPUs, with the stock being almost non-existent.

The RX 6800 XT has been selling on eBay for 200% above its MSRP since November, but recently in December, the price however has decreased to 180%, but it still nowhere close to the MSRP.

The situation somewhat looks slightly better when it comes to AMD’s RX 6800 non-XT GPU, which has been selling for 180% above its MSRP, but the price quickly dropped down to 145% on average, and has remained constant , at least for the time being. 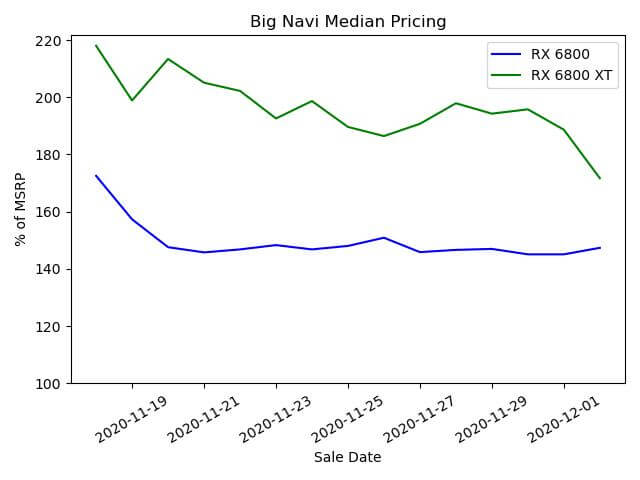 Zen 3 has the best pricing outlook out of all the product types investigated. The 5950X is the worst offender as this flagship CPU sold at over 240% above its MSRP since November, but slowly made its way down to 155% by December. When it comes to the 5900X, this processor has been selling at 190% above the MSRP value. Though, the price has dropped down to 160% by the end of November.

The Ryzen 5 5600X CPU witnessed a steady pricing, with no spikes or lows, and the price hovering around 150% above its MSRP. AMD’s Ryzen 9 5800X has been in a slightly better situation in the Zen 3 lineup, as the CPU started selling with an MSRP above 150% of its value, but afterwards the price slowly dropped down to 120%.

“The 5950X and 5900X are still well above 50% of their MSRP, and based on trends I would not expect them to be down to MSRP before mid-January”. – Michael Driscoll. 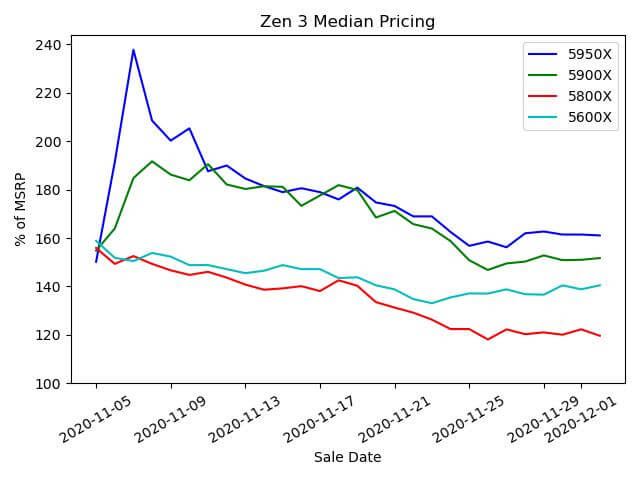 The analysis also covered the trend observed with both the Xbox Series S/X and PS5 Disc/Digital new gaming consoles, but I’m not covering them. This is the summary as posted by the author:

“In short, scalpers have made $82 million in sales, $39 million in profit since September on just these 14 products on eBay. But let’s not forget eBay and PayPal, taking in $6.6 million and $2.4 million, respectively, in fees for providing the platform and payment options.

With eBay’s fairly high fees, I assume it’s the place scalpers choose last as FB Marketplace, Craigslist, other forums/discords offer better profit margins, so this analysis can only be a proxy for the overall scalping market.

I would conservatively guess the real scalping market is at least 2-5x larger (personally I think 10x+); it’s clear how scalping is a very lucrative career option for someone of dubious morals. For Zen 3, there’s some hope in sight by early next year; for the rest, until supply meets demand it’s pretty bleak.”

On some other related news, these hardware shortages and supply issues have also affected the pre-built market segment. As per a recent article posted by PC World, many pre-built vendors are also getting hit with massive supply issues relating to the latest hardware silicon from both AMD and Nvidia.

So it’s no longer just an issue related to the DIY market. However, Intel is the only company not dealing with supply issues like Nvidia or AMD. According to Vendors this is due to the company’s much stronger supply chains.

Though, it should be noted that most of the vendors were small system integrators/vendors, not big giants like Dell or HP, according to Gordon Mah Ung.