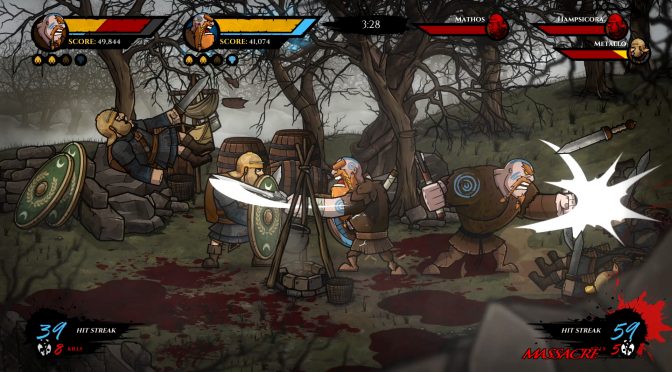 Wulverblade features eight levels overflowing with sharp blades, bloodthirsty hordes and deadly arenas and two-player co-op. Players can assume the role of either Caradoc, Brennus or Guinevere – members of a family originating in the northern tribe of the Caledonii. This family of warriors has been the guardian of the most northerly tribes of Britannia for generations. The Romans have invaded Britain and conquered all that lies before them … until now.

Players will defend the homeland from the Roman army with strength, courage – and severed body parts. Players can unleash deadly combos and devastating finishers to turn the tide of battle as they fight through eight scenic levels based on real locations. They will explore a rich, historically inspired story filled with all-out mayhem, manic action, and plenty of murder in this faithful homage to classic co-op beat ‘em ups.

“Playing side-scrolling brawlers with friends and family was a quasi-religious experience – and it defined my love for games during the ‘80s and early ‘90s. With Wulverblade, we’re introducing a whole new generation to the pain and joy of dismemberments, decapitations, and the occasional geyser of arterial blood.”

“Wulverblade contains enough historical facts and raw combat to feel like the real thing – and it even features drone videos shot in the actual locations. Sure, it’s stylized – but the fighting was that brutal and soldiers in the 9th Legion deserved to get their butts kicked by the Caledonii. I dare say that playing Wulverblade has therapeutic value – and you’ll even learn a thing or two about Britannia’s gruesome past.”