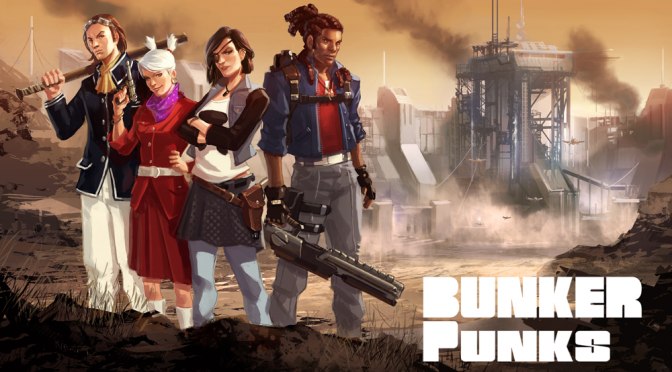 A few days ago we had the pleasure of interviewing Bunker Punks developer Shane Neville. In our interview Shane tells us about his inspiration for Bunker Punks and why he decided to go Indie after working on several AAA titles.

DSOG: Would you please introduce yourself to the our readers and tell us what your role is on Bunker Punks.

Shane: My name is Shane Neville, I’ve been developing games for almost 20 years and I’m in charge of the design, programming and art on Bunker Punks, basically everything but the audio and music.

DSOG: What inspired you to work on a game like Bunker Punks?

Shane: It all started with a conversation with Ryan Clark, from Crypt of the Necrodancer. I was feeling a bit lost on my current project and he suggested that I work on a larger game and make something more personal.

I had been experimenting with procedural generation and playing a lot of old school FPS games at the time, so putting the two together made a lot of sense. The world and characters started to take shape about a month later.

DSOG: Now I know you have worked on some more “commercial” game releases in the past, what made you decide to take the indie route?

Shane: There were quite a few factors that worked into the decision. First, I really liked working in AAA. It was a lot of fun working with super talented and passionate people making these giant experiences.

Most of my career was spent in design and production and I had started to work up the ladder to running a small game studio for Longtail. I found myself farther and farther away from the actual development of the game, which I didn’t like at all.

There’s also a lot of freedom in independent development. The AAA world needs to turn a profit and the pitching and production process is very risk averse. I totally understand the concern, but I wanted to take more risks and make some games that might otherwise not be made.

The other big factor is my daughter. I really wanted to be present in her life and in AAA, the hours and travel can be demanding, especially when you are at the management level. As an indie, I can work at home, I drop her off at school every day and pick her up. If things are busy and I need to work late, I can get to work right after reading bedtime stories.

DSOG: I can really respect that working as an indie developer gives you the freedom to develop your game the way you want to. Tell us a bit about Bunker Punks, what are your plans for its development?

Shane: Bunker Punks is a FPS/Revolution Management games with Roguelike Elements. It takes a lot of inspiration from the run-and-gun gameplay of first generation FPS games and mixes it with a deeper bunker building and character management sim.

It’s set in a dystopian future where just about anything that can go wrong has: the oceans have risen, civil war broke out, food and water shortages, pollution, bees dying. It all happened.

When the world falls apart, the world’s elite, the 1%, barricade themselves in walled cities that they have built to survive the apocalypse. They create corporate governments and rule over themselves.

Outside of the walls, civilization falls apart and the population plummets. But there are survivors.

In underground bunkers, abandoned missile silos and deep caves, some people have have found a way to survive. Some of these survivors,the Bunker Punks, want to take the fight to the corporations. You play as the Bunker Punks themselves and help them build the bunker and grow the Bunker Punks movement.

I’ve been working on Bunker Punks for a little over a year now. The next step is to get the game ready for a beta/Early Access launch and then full release. I’m targeting 2016 for the final release.

DSOG: You mentioned an Early Access Launch, does that mean you are looking to get the game Greenlit or will you just release early builds on the Humble Store?

Shane: The plan is to ultimately get Bunker Punks on Steam, whether that’s through Greenlight or another method is still to be decided.

DSOG: Well I feel confident that if your game were to be put on Steam Greenlight it would get the go ahead, because it looks pretty rad, but then again Greenlight is a really mixed bag.

What platforms are you planning on releasing Bunker Punks for?

Shane: Right now, the focus is PC/Mac. LINUX and consoles are possibilities, but nothing has been locked down yet.

DSOG: As Dark Side of Gaming’s chief Linux representative I would be very pleased to see this game get a Linux release!

On The Humble Store I see you have listed Bunker Punks as DRM-Free, what made you decide to release it as such?

Shane: There are a few simple things that go into this:

First, I believe that most people are honest, good people and will purchase and use your game legally.

Second, DRM, in many implementations, punishes the honest customers who are playing your game by giving them a frustrating experience.

Third, if someone really wants to get your game without paying for it, they’ll figure out how to do it.

Will you try to get your game on other markets such as GOG (Good Old Games)?

Shane: I do want to keep it relatively small, since I’m only one guy, supporting a bunch of stores could get painful fast. That said, I want to be where my players are and I think that the old school gameplay of Bunker Punks would be a good fit at GOG.

Well I think that about wraps things up for now. I do want to follow up with you have another talk when you get closer to releasing Bunker Punks.

Do you have an expected time frame for when Bunker Punks will be available in Early Access or are you keeping that a secret for now?

Shane: I have a target, but it’s too early to commit to a date.  I’d love to do another follow-up interview. When I’m about a month or so out, I’ll drop you a line.  I’ll also make sure to get you a build around the same time.

DSOG: Excellent! Well I appreciate you taking the time to sit down and tell our readers about Bunker Punkers, and I look forward to talking to you again in the near future.

Shane: Thanks a ton!  It was great chatting with you. Looking forward to seeing the article!

It is always great to be able to interact with some really down to earth indie developers and also showcase some really cool games. I am really really looking forward to the launch of Bunker Punks.