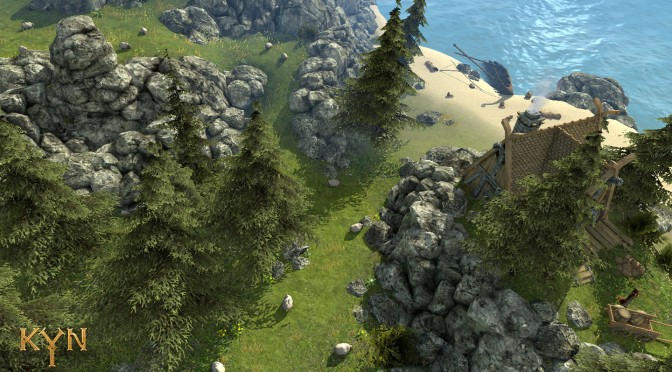 Tangrin Entertainment has provided us with a preview code for Kyn; its new tactical action RPG. The game is set in a Viking inspired mythological world, and lets you control up to 6 warriors. Kyn comes with a crafting system, an inventory system similar to those found in other action RPGs, skills with which you can equip your characters, and a “bullet-time” feature that slows down time so that you can issue commands to your characters independently.

Kyn is currently in beta phase and is plagued by a number of issues. Shadows are pixelated (even on the highest settings), audio feels very amateur-ish and ’empty’, and the environments do not look as good as those found in other modern-day action RPGs. Lighting effects are also not that “wow-ish” and there are some physics issues (the bodies of your enemies bounce like balloons when you deliver the final strike).

Apart from those issues, we kind of enjoyed Kyn. We were pleased with how customizable our characters were. An interesting crafting system is currently in place, and players can loot chests, enemies and tombs in order to find more powerful weapons and armours.

As we’ve already said, players will be able to control up to six characters. Each character is equipped with a number of skills, however the developers have limited the available skills to 2-3. On one hand, this is kind of disappointing. On the other hand, this decision adds value to the tactical nature of the game.

Kyn is more tactical than your average action RPG, and it’s also a really hard game. Players will have to pay attention to the environments in order to avoid environmental traps (or use them to hurt their enemies). Players will also pay attention to the enemies as some of them carry shields that make them invulnerable when attacked from the front (you can see this in action in the video accompanying the article). The game also comes with some puzzles to solve, though its main focus – at least in the preview mode – was the combat itself.

Overall, we enjoyed the time we spent with the preview build of Kyn. It’s not the next “Diablo” thing, but it’s definitely an interesting indie offer. The fact that it’s made by a two-man team is also amazing. Tangrin Entertainment promises to offer 20 hours of gameplay footage, so it will be interesting to see whether the final game will be more polished (in terms of visuals and audio).

In conclusion, Kyn has potential. Tangrin will have to further polish some areas, iron a number of bugs, include a proper Single-Player campaign, and offer it at a tempting price.