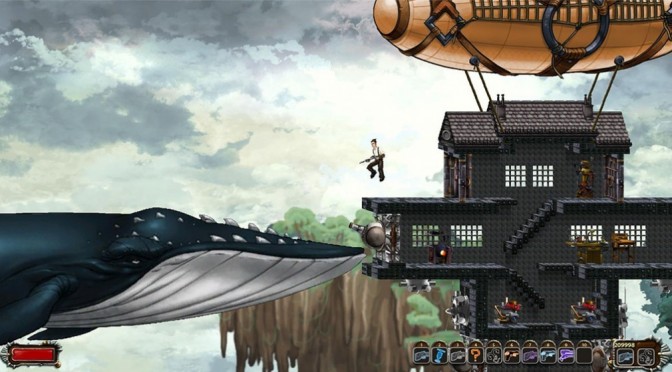 Snowed In Studios was kind enough to provide us with a review copy of Windforge, and you can read our first impressions of it below. Windforge is described as a game with Contra-style action mixed with the creative fun of Terraria. Windforge has over 1200 craftable items and counting, and features a large completely destructible procedural world.

In short, WindForge is an RPG that allows players to build their own airships and explore the hostile skies, and mixes 2D-shooter action with the freedom to create and explore.

It’s a pretty interesting concept and we enjoyed it. Its art style is amazing and… well… we love those old-school 2D visuals. There are some issues with the game’s collision detection and the visuals feel somehow ‘hectic’ and ‘disorienting’ at times, but overall we liked what we saw.

Windforge is fun in its current version and comes at a low price. If the game was priced at anything close to the $30 mark, we’d suggest everyone to hold their horses and wait until Snowed In Studios further polishes it. But given its $14.99 price, we do recommend it, especially to those who enjoyed Terraria and Minecraft.

Windforge has just been released on Steam and comes with a 10% discount until March 18th.