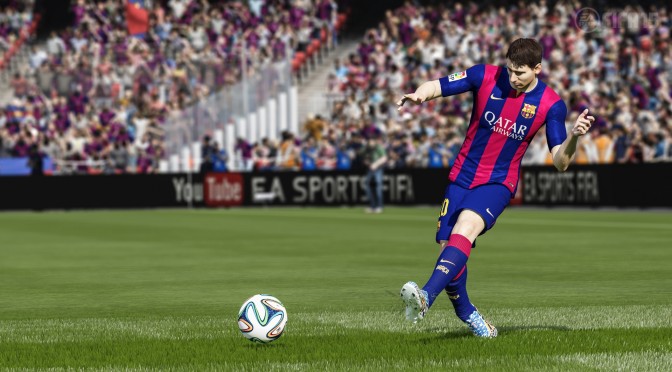 EA Sports was kind enough to provide us with a PC Review Key for FIFA 15, and below you can read below our first impressions. The PC version of FIFA 15 is based on the current-gen version, meaning that PC gamers will be able to enjoy top visuals as well as all the benefits introduced by the IGNITE Engine.

FIFA 15 comes with lots of options and modes, however we feel that we should concentrate on what is the most important thing in such titles, and that’s no other than the gameplay itself.

As you may have heard, these past years the FIFA series has been offering better – overall – gameplay than its biggest rival. EA Sports has managed to create a game that plays quite well. Gamers can control their players at will, and contrary to its rival – Pro Evolution Soccer – you will be able to run towards whichever direction you want with your defenders. In Pro Evolution Soccer, the defenders – for some unknown reason – are always running towards the direction of the ball instead of ‘obeying’ your exact commands. And while this may be helpful for newcomers, it’s a big no-no for a lot of us.

But is FIFA 15 the perfect soccer game as it’s been advertised? Far from it. EA Sports’ title suffers from a lot of bugs. Thankfully, we did not encounter that annoying ‘all_players_at_the_center’ bug, however there are all sorts of AI issues. Goalkeepers will sometimes freeze for no apparent reason, defenders may do really silly and awkward things (as well as not mark attackers when they’re making a run because… who really cares about them… right?), there are a lot of scripted events during the games (meaning that something that is bound to happen WILL happen, no matter what you’re doing, like for example an unbelievable header or a wrong pass despite pressing the analogue stick towards the right direction, or scoring a really easy goal).

For example, during our last matches there was a slight pause right after shooting the ball (we’re talking right at the moment our players were shooting the ball, not while the ball was mid-air). And those pauses where happening whenever we were scoring a goal. In other words, the game had ‘decided’ from the get-go that those particular shots would enter the goal.

As for the game’s physics, you can expect all sorts of hilarious moments to happen. EA Sports had one whole year to iron all the physics bugs present in its IGNITE Engine, however – and at this point – it seems that this engine needs major tweaking and enhancements due to the severe amount of physics glitches. Moreover – and while there is only minimal clipping, so kudos to the team for that – players behave like dolls instead of ‘real’ humans when interacting with each others.

So yes, FIFA 15 is still far from becoming the ultimate soccer game. The sad thing here is that its biggest rival, Pro Evolution Soccer, is an even worse game (at least all old-gen parts till 2014). Quite frankly, it’s really sad that the game is still plagued by all sorts of physics and AI issues. And it’s really annoying when the game’s scripted events kick in, thus turning you into a mere spectator and nothing more. I mean, there are occasions when you’re pressing forward – while defending – and your player goes slowly backwards or stays still (something that ironically occurred in Pro Evolution Soccer 2011 – 2014 as well).

But what about its visuals? FIFA 15 looks great but we don’t consider it a true next-gen experience. EA Sports has added some nice little details but this still feels like an enhanced version of and old-gen title. Oh, and contrary to EA Sports’ concerns, IGNITE runs incredibly well on the PC. FIFA 15 is not a demanding title, and most of you will be able to enjoy it. Hell, a single GTX680 is able to push it to 4K resolutions, and that says a lot.

All in all, FIFA 15 is currently a good soccer PC game. Thankfully, the PC version works like a charm (again, we did not encounter that ‘center’ bug), runs incredibly well, and looks better – thanks to its AA solutions – than its console counterpart. It’s far from perfect, it’s plagued with major issues, it can become frustrating when all sorts of scripted events kick in, but it’s still better than its biggest rival.

Konami will release PES 2015 in November, and we’re really looking forward to it. Will it be able to compete – or even surpass – EA Sports’ game? We’ll find out soon enough!