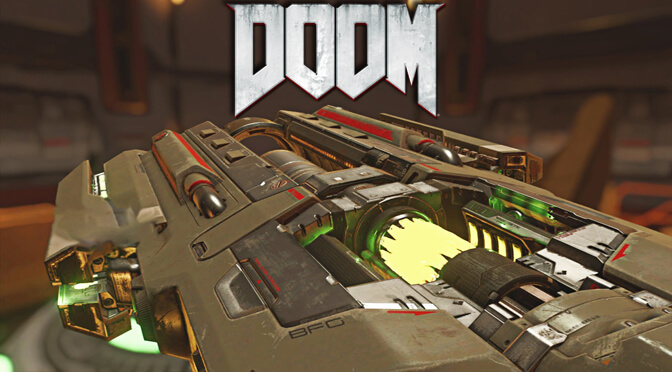 The BFG 9000 is an iconic part of DOOM’s identity. The BFG 9000 is a large, solid metal gun which fires large balls of green plasma. It’s considered as the most powerful weapon in the game. The initials composing the weapon’s name stand for “Big Fucking Gun”. In the 2005 movie they called it “Bio Force Gun”. Alternatively, is also stands for “Big Friggin’ Gun” or “Big Fancy Gun”.

The BFG 9000 was based on photographs of a toy blaster sold by Toys R Us in the early 90s. This is probably due to the popularity of toy guns in the late 80s and early 90s. Movies like Rambo, The Terminator, Predator and Alien had their own toy lines.

The industrial futuristic aesthetics of the weaponry provided vibrant inspirations for the developers of DOOM. All of these toy guns were fairly cheap, and finding them was as simple as driving to the mall.

The first appearance of the weapon was in the original DOOM’s Beta known as the BFG 2704 in the DOOM bible, which was the original game’s design document. In the document the weapon was described as following, “BFG 2704 (red). Horrible hallway-scouring weapon. Damages user a bit. Awful recoil. BFG stands for ‘Big Fucking Gun’. Safest use: back to wall, distant target.”

You can watch the video below if you want to find out more about the BFG. You can also find the original DOOM bible here.

Thanks Gamespot and Wiki.