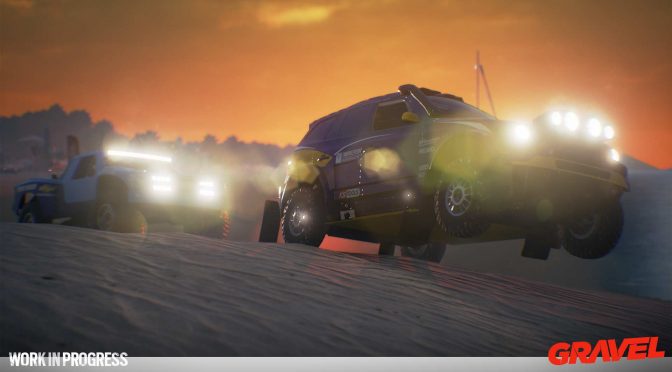 Milestone has released the Gamescom 2017 trailer for its upcoming off-road racer, Gravel. According to the team, Gravel has been created with the intention of revolutionising the off-road scene, opening up the most daring jumps and craziest stunts to players taking to the more than 50 tracks it has on offer.

Milestone has also confirmed that it will have a demo for Gravel as this year’s Gamescom. The Gamescom demo will offer attendees a valuable sneak peek at some of the game’s key features, including a stack of adrenaline filled races cutting through wild and unexplored landscapes.

Gravel is set to be a journey around the world for dedicated motorsports fans and casuals alike. Milestone has set out to pack in every kind of track for a full experience; from the red hot sands of an Australian Quarry through to the isolated and unexplored territories of Alaska, where players will cross the arctic tundra and pass through one of the most famous circuits in the world, Montalegre.

Gravel also throws in some of the most extreme competitions from real world arenas, skillfully recreated by Milestone’s developers, merging courses that blend together reality with the best of their own imagination.