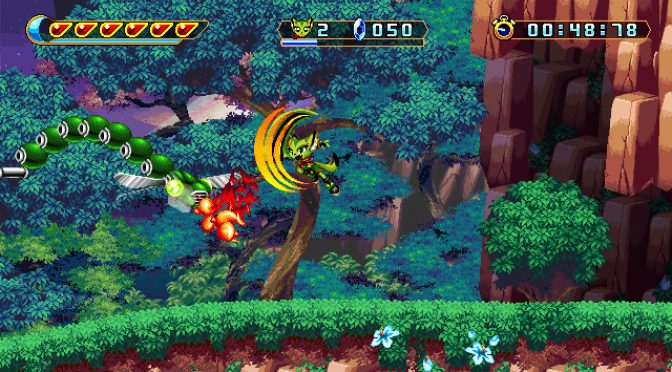 GalaxyTrail has released a new gameplay video for its upcoming Sonic-inspired platformer, Freedom Planet 2. This video showcases the game’s latest Sample build and some of the new features it packs. And it looks absolutely retro-gorgeous.

In Freedom Planet 2 version 1.0.6, Lilac has a new Blink Dash ability that allows her to teleport across short distances. Lilac can use it after guarding to either counterattack her foes or flee to safety. Carol, on the other hand, has learned some new tricks in the form of long-range kicking attacks. And last but not least, Neera can lay down Spike Traps to catch enemies, block projectiles, and spring herself high into the air.

Freedom Planet 2 will have a flexible difficulty system as it will let players change the rules of the game temporarily to make certain stages easier or harder. Using special Gold Gems found in stages or crafted by fusing your regular crystals, you can modify specific parameters: Add more lives, alter attack damage, and more.

Furthermore, the game will introduce Revivals. When killed, players will be able to spend one of their extra lives on the spot to get back up and keep fighting. Players will recover a small number of life petals, so if they’re not careful, they may lose yet another life.