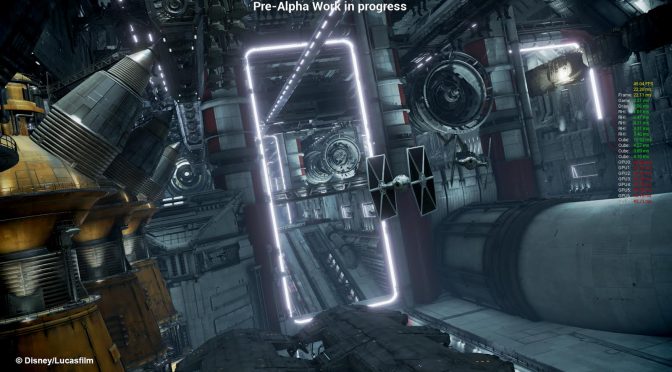 Nvidia got in touch with us and told us that this demo does not use real-time ray tracing.

YouTube’s ‘VRMA Virtual Reality Media’ has shared an off-screen video from Disney’s upcoming Star Wars flight simulator that will be powered by Epic’s Unreal Engine 4. This flight simulator will be running on eight Nvidia Quadro P6000.

Disney’s Star Wars flight simulator will be part of Star Wars: Galaxy’s Edge and will let players hop into the cockpit of the Millennium Falcon, fire the ship’s blasters and get the vessel prepped to enter hyperspace.

In order to showcase that this is in real-time, Disney also paused the demo and moved the camera around. And while this is an off-screen footage, I’m pretty sure that die-hard Star Wars fans will find it interesting. Yes, this flight simulator currently requires a lot of raw power, however it’s really amazing that we’re getting this kind of stuff in real-time.

Disney showed off what Real Time Ray tracing of Star Wars looks like with 8 Nvidia GPUs via SVGN.io