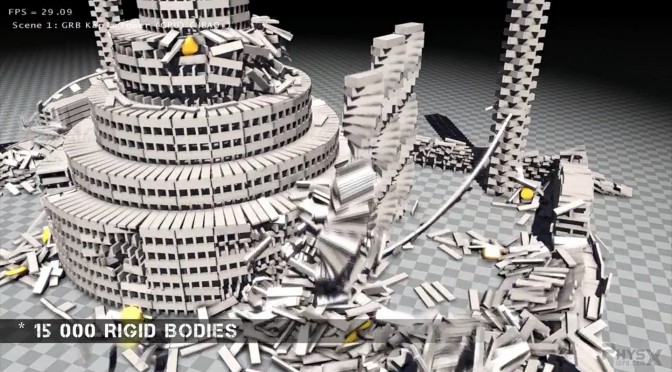 PhysXInfo has shared a video, showing a real-time demonstration of NVIDIA’s new hybrid CPU/GPU rigid body solver, based on the experimental branch of PhysX SDK 3.4. As stated, GPU acceleration (as showcased in the video) can provide a significant performance boost in heavy scenes, and also has same behavior and features as the CPU execution.

“PhysX GRB is the new GPU accelerated Rigid Body simulation pipeline. It is based on heavily modified branch of PhysX SDK 3.4, but has all the features of the standard SDK and almost identical API. PhysX GRB is currently utilizing CUDA and requires NVIDIA card for GPU acceleration.”

Yes yes, another NVIDIA exclusive feature. Still, it does look impressive, so enjoy the video!