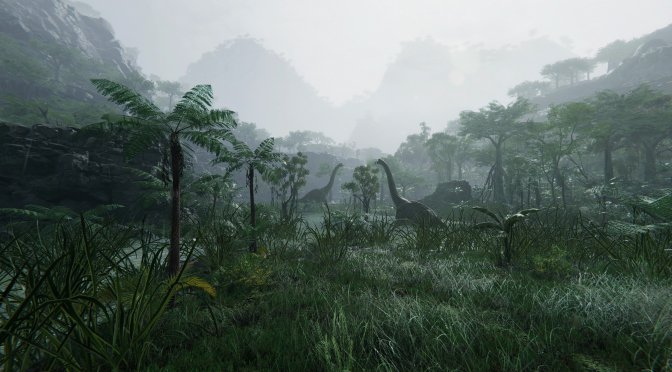 Project Ferocious is an FPS dinosaur game that has been in development for a while. Powered by the Unity Engine, this appears to be one of the most graphically impressive games we’ve seen. And, surprisingly enough, Project Ferocious is being created by a single person.

From what we know so far, the game uses HDRP for rendering, and the environments mainly use Quixel assets. Additionally, Project Ferocious will feature completely interactive and partially destructible vegetation, water volumes the player can swim and dive in with GPU fluid simulations for surface waves, destructible environments and buildings, real-time ocean tech and dynamic weather.

Over the past couple of years, OMYOG has been sharing small gameplay clips for Project Ferocious. These gameplay videos showcase some impressive mud physics, surface waves, and dinosaurs. And YouTube’s ‘MathChief – The Best of Gaming!’ has collected all of these clips in one video.

Project Ferocious targets a 2023 release date. However, I’m a bit concerned about what this game will have. From what I can see, it will have some basic gameplay mechanics. It will also be a graphical tech demo for Unity. What about its story though?

Anyway, enjoy the video and stay tuned for more!

Kudos to our reader ‘DieselBudgie’ for bringing this to our attention.