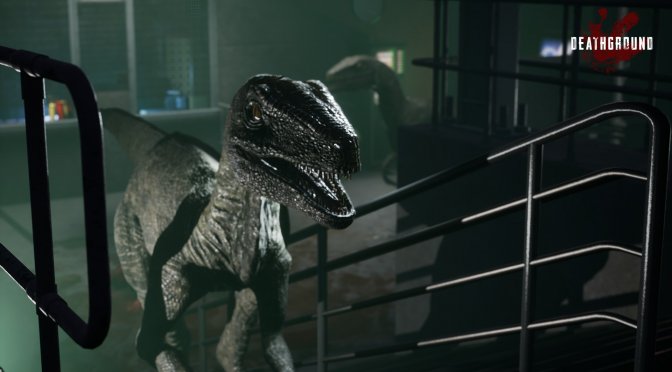 Last week, we informed you about a new multiplayer dinosaur survival horror game, Deathground. And today, Jaw Drop Games has released the first gameplay teaser trailer for it. This trailer will give you an idea of how the game looks and plays.

Deathground will throw players into a desperate battle for survival against deadly AI dinosaurs. Players can hide inside closets, and can use a tracking device and flashlights. The game will also have AI dinosaurs, weather systems, random spawn and extraction points, as well as dynamic objectives.

Deathground will be using Unreal Engine 4, and promises to have dynamic gameplay enriched with objectives, stealth, combat and teamwork. Players will also interact with a range of items and weapons, and have access to a crafting system.

It’s also worth noting that the game will support both solo and co-op modes.

As you can see from this gameplay teaser trailer, the game has gameplay mechanics that are inspired by Alien: Isolation. There is motion tracker, and players do not have any weapons to use. Moreover, and as we’ve said, players can hide inside closets.

There is currently no ETA on when Deathground will come out.