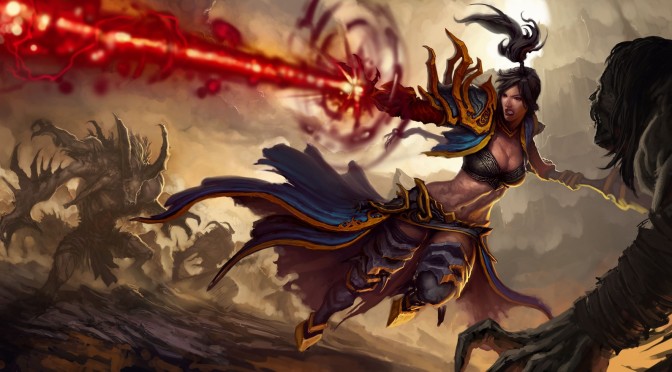 If you’ve been following Heroes of the Storm, you may have noticed that some new heroes will appear real soon. The one that will appear first is Li-Ming (or better known as the wizard from Diablo 3). Her passive resets her abilities fully upon hero kill (including heroic ability) and she has some of the key abilities you would have used in Diablo 3 playing as that character. These are the magic missile, arcane orb, and teleport. Except of teleport, these abilities have high damage capabilities. And alongside her unique passive ability, these abilities can make Li-Ming a mighty adversary on the battlefield. Now, let’s go over the abilities.

Magic Missile (Q) – Based on how you aim, all the missiles can focus on one target, or spread to multiple targets.

Arcane Orb (W) – Shoots out an orb arcane energy. The further it travels, the bigger it gets and the more damage it deals in an increasingly larger radius. Great for dealing a blow to a group, but easily dodged by those paying attention.

Disintegrate (R) – Shoots out a channeled beam of destructive energy in a straight line damaging all in its path. Her beam goes anywhere your mouse goes, and at the speed of the mouse as well, unlike Cho’Gall’s shadow bolt heroic that slowly follows it. If she kills an enemy with it, she can recast it due to her passive.

Wave of Force (R) – This ability knocks enemies out of the targeted area. It can be used defensively to keep tanks and assassins away or offensively to push squishy fleeing enemies back towards her team.

Li-Ming looks like she might be what we want from assassins, especially if we take account the heroes that most players pick. Her mobility and abilities might make her one of the more desired picks in the future. The only downside to her kit is that she can’t control the crowd (like all the other top tier characters do). While her damage may be high enough, her low health pool makes her very vulnerable, despite the fact that Blizzard has added some skills through the levels to make her more challenging. Even though she may be very mobile with the short cooldown on her teleport (made shorter by not taking damage if you take the lvl 1 ability), one simple stun could be the end of her.