There has been a lot of speculation surrounding INTEL’s planned CPU roadmap and the architecture which is going to power the next-gen Core Gaming, mainstream and HEDT CPUs. We already know that next-gen COMET Lake-S CPUs are going to release later this year, and they are also going to offer some compatibility with the upcoming Z490 LGA 1200 socket motherboards, which are going to be hit the shelves soon.

Now, sources over at WccfTech are confirming that the 11’th Gen Rocket Lake-S desktop CPUs are also going to be compatible with the upcoming Z490 chipset and LGA 1200 socket motherboards.  Speaking of next-gen INTEL processors and platform, GIGABYTE just recently confirmed that their Z490 AORUS lineup of motherboards are going to support limited PCI-E 4.0 capabilities on Comet lake, which seems obvious since the Intel’s incoming 10th generation Comet Lake-S series of processors may not fully support this new PCIe 4.0 standard.

Since hardware-level support for PCIe 4.0 is already built-in these Z490 boards, only Rocket Lake CPUs are going to offer full compatibility of the PCIe  Gen 4.0 standard. PCIe- 4.0 has been an AMD-only feature within the consumer market till now, but things might change with the launch of Rocket lake-S CPUs.

Rocket lake-S CPUs are going to support the PCIe 4.0 standard and interface, and as per some rumors Rocket Lake -S might launch at the end of this year, or early 2021. But this places Intel’s Z490 platform longevity in a difficult position, since INTEL won’t be supporting even the LGA 1200 socket for long. LGA 1200 based motherboards are probably not going to stay for a long time, as Z490 is only expected to support Comet Lake-S and Rocket Lake-S CPU series, while Alder Lake-S is already rumored to feature the LGA1700 socket.

For GAMING perspective, both Comet Lake and Rocket Lake are relevant for gamers looking to upgrade their systems, and since AMD has been quite dominant recently with the release of Ryzen CPUs, things are going to get a bit rough on Intel’s side unless INTEL goes for some aggressive pricing policy.

The Rocket lake S desktop platform is going to be based on an advanced 14nm process node. Not much is known about these CPUs, but one thing important for gamers and enthusiasts would be the 20 CPU PCIe 4.0 Lanes support on these processors.

There is one good news with regards to this new LGA 1200 socket and platform though. Noctua, an Austrian hardware manufacturer of CPU coolers and computer fans primarily for the gaming enthusiast market, has just confirmed that some of its current CPU coolers are compatible with the LGA 1200 socket motherboard, so this is one thing gamers need not worry about.

Cooler compatibility seems possible since the LGA 1200 socket has the same dimensions as LGA 1151 socket (37.5mm x 37.5mm), so some CPUs coolers are going to work. Though make a note that Comet Lake is NOT electrically/mechanically compatible with Coffee Lake-based motherboards, due to the shift in the socket keying. 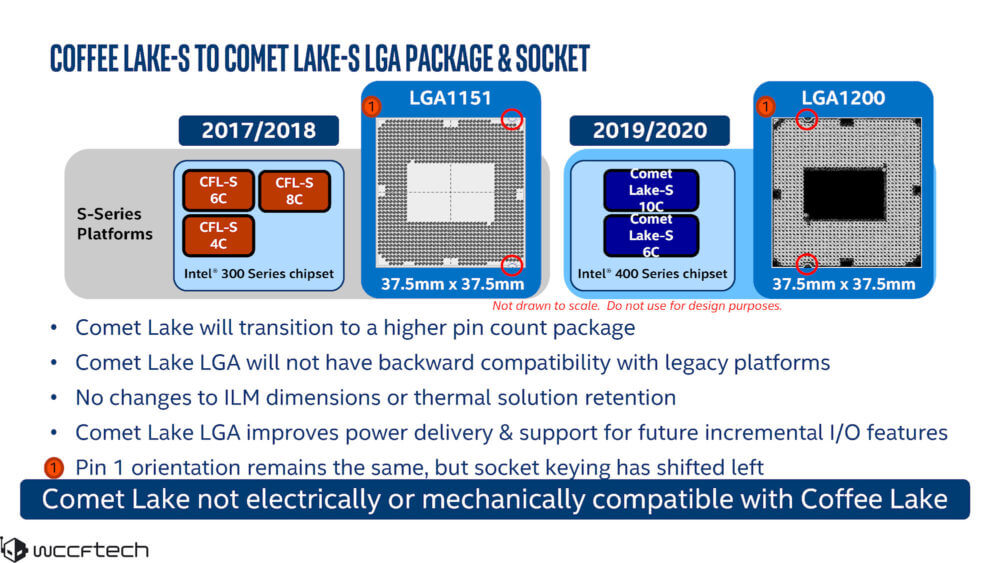 One block diagram highlighting the technical aspect and specs of the Rocket Lake S CPU platform. Image courtesy of Videocardz.

As with any rumor or leak, I suggest you take Wccftech’s article with a grain of salt, unless we get some official info and confirmation from INTE regarding Rocket Lake-S.