AMD is planning to launch their next-gen Ryzen 4000 series of “Zen 3” CPUs for the mainstream desktop and HEDT market later this year. Zen 3 is expected to offer “gamers” and end users a huge uplift in overall performance as well as efficiency.

Now, according to one leak posted by RetiredEngineer@chiakokhua, coming via Ice Universe, it looks like ZEN 3 CPUs are going to give us a significant amount of uplift in IPC.

Internal rumors circulating among engineers at two well-known OEMs indicate that the performance  of current ZEN3 engineering samples have risen to an “Alarming” level. Do note that these are early “engineering” samples, so the final Retail products could easily feature even higher performance figures.

According to the same leaker, it is reported that AMD claims an IPC improvement for Zen 3 to be around 15-17%,  but internal testing done by these two OEMs reveal that the IPC is even much better than AMD’s own claims.

AMD Ryzen 4000 chips which are based on the advanced “7nm+” architecture could feature an IPC  increase of 15% to all the way up to 20% with the new “Zen 3” cores. This would be a major IPC uplift for Ryzen 4000 Zen 3 CPUs, assuming these results are accurate.

With ZEN 3 we can expect significant IPC gains, faster clocks, and higher efficiency.  AMD recently confirmed that Zen 3 4’th gen Ryzen desktop CPUs will only be supported by the 500-series chipsets.

Though, there’s still a chance that AMD could allow BIOS revisions to be released for Ryzen 4000 compatibility, or at least on the 400 series chipsets such as “X470” and “B450”. This remains to be seen though.

The  Ryzen 4000 series family would be the last generation of processors to support the AM4 socket because with Ryzen 5000 series, “ZEN4” architecture will be used which will require a new socket, as well as a new chipset. 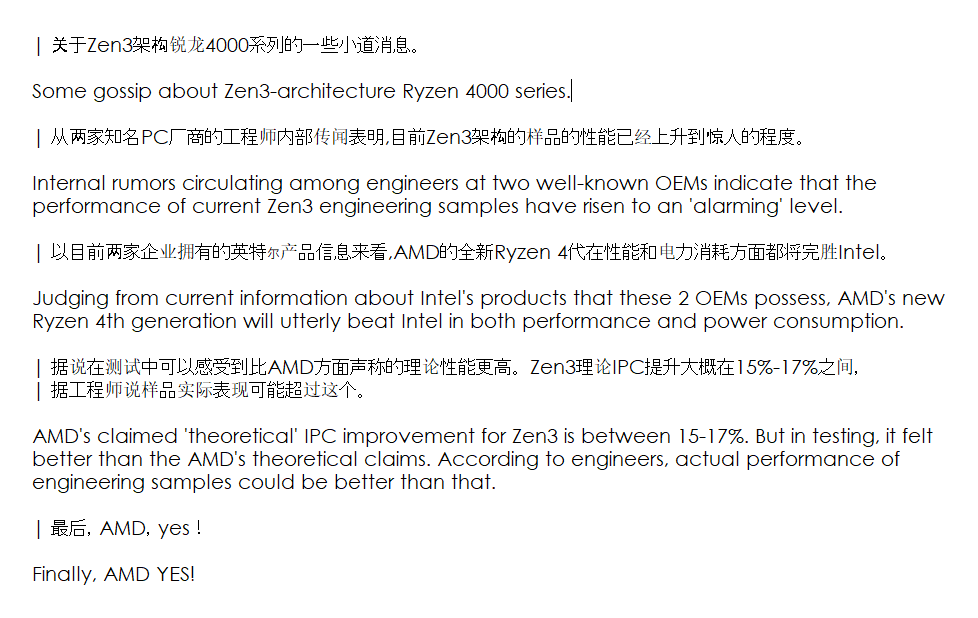