Blast from the past ! It looks like AMD has upgraded one of its 3 years old processor from the Ryzen 1000 series. The first-gen AMD Ryzen 3 1200 has been a budget CPU for quite some time, and originally it packed a 14nm ZEN design.

Now AMD has upgraded this entry-level budget CPU on a 12nm ZEN+ architecture node. One German Retailer has also listed this CPU for sale on its website for 60 USD, or €54.73.

This CPU was released in 2017. Speaking of specs, it packs  4 cores with 4 threads, and  can operate within  3.1 GHz (base) to 3.4 GHz in boost frequency. It has 65W TDP value. All the specs remain the same as the older SKU, except for the slight boost in performance which comes thanks to the ZEN+ architecture improvements.

So if you are looking for a budget entry-level CPU for gaming or some other work, then this processor offers a pretty good value, unless of course you really want to upgrade to a newer ZEN architecture, or process node (Ryzen 2000/3000 series), which makes sense given the age of this processor.

But should you plan to purchase this CPU, then make a note of this.  The new SKU model has a different part number, with the code “YD1200BBM4KAFBOX”, whereas the older 14 nm model  had the part code as “YD1200BBM4KAEBOX”.  Look for the AF initials.

Also if anyone is interested then they can find some gaming benchmarks, and review of this processor over here and here. These are obviously very old articles though. 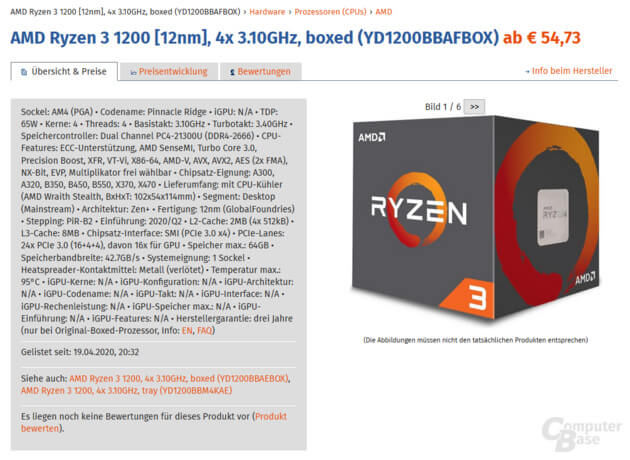