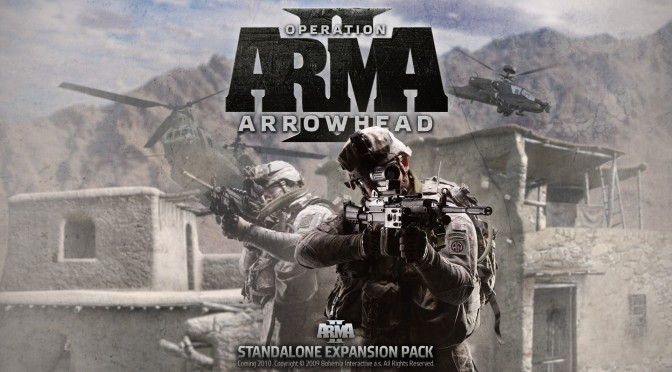 Bohemia Interactive announced today the release of update 1.63 for Arma 2: Operation Arrowhead. According to the changelog, this update replaces Gamespy with Steam matchmaking, implements a new BattleEye Service and packs a huge amount of fixes and multiplayer optimizations. END_OF_DOCUMENT_TOKEN_TO_BE_REPLACED

Bohemia has released Take On Helicopters: Rearmed, a free official DLC for Take On Helicopters. This DLC seamlessly merges Arma 2 and Arma 2: Operation Arrowhead content into the game. Players will be able to fly their helicopter over the gorgeous autumn landscape of Chernarus, dodge incoming fire from a myriad of Anti-Air weapon systems, and fight in massive combined arms operations. END_OF_DOCUMENT_TOKEN_TO_BE_REPLACED

Steam fans, here are some new, great deals for all of you. Pre-Orders for Team 17’s and City Interactive’s upcoming games (Worms Revolution and Dogfight 1942) are now live and come with some great bonuses. In addition, Bohemia Interactive has released a new DLC for ArmA II: Operation Arrowhead, called ArmA 2: Army of the Czech Republic. END_OF_DOCUMENT_TOKEN_TO_BE_REPLACED

Bohemia Interactive, the award-winning independent Czech development studio, is delighted to announce that just before Santa’s sleigh glides across the rooftops of good boys and girls the world over, their own Christmas present surprise is a new mega update encompassing the whole range of Arma II, Operation Arrowhead & their DLC. Happy gaming ArmA fans and you can view the highlight notes bellow. END_OF_DOCUMENT_TOKEN_TO_BE_REPLACED

Bohemia Interactive released a new, massive update for their military sim game, ArmA 2. This new release candidate is 533MB in size and includes both ArmA 2 1.11 and ArmA 2: BAF 1.03 updates. Alongside some major fixes and especially multiplayer networking/jip/ ones there are tweaks, improvements and bonus stuff like FXAA. Those interested can head over to ArmA 2’s official website and download it. Be sure to also check the – literally huge – changelog bellow for a full list of what has been changed/added. END_OF_DOCUMENT_TOKEN_TO_BE_REPLACED