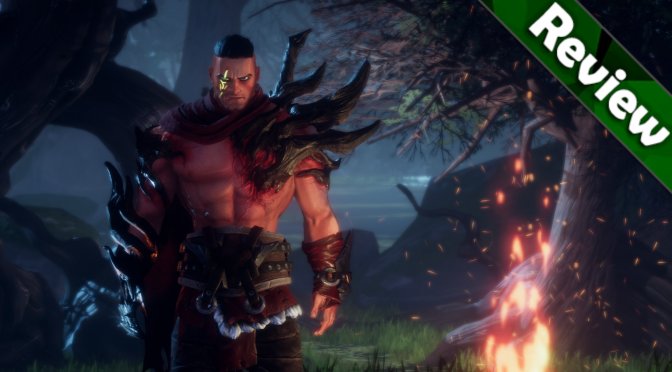 I learnt about Warlander’s existence back in mid-2019 while it was still being developed as an action-RPG. As a Fable fan I was immediately hooked by Warlander’s narrative, visual style and fantasy setting, all of which suggested the game had decent potential. Unfortunately, the developers – Clock Drive Games – announced in September they needed to make some changes.

Due to constraints, Clock Drive Games announced that Warlander would now become a rogue-like, action title that would cut many features from their original design. The broader, story-driven adventure this studio had originally intended to make was never going to be finished in time, so they settled for a genre that could work with what they had.

While there are surely games that have managed to rise above such a major shift in development, Warlander is testimony to how such an impromptu transition rarely has a happy ending. Warlander has a serviceable combat system that can provide satisfying moments of exaggerated brutality, but this game has nonetheless released as barely an incomplete comprise for what it could have been.

A nice slice of life

In Warlander, players take on the role of a chieftain from the Warheart clan named Bruce. As hinted by the pieces of vine and bark jutting out of his body, Bruce is a revenant brought back from the dead by an ancient forest deity.

The reason for his resurrection lies in the fact that the mythical forest is under siege by a formidable army known as the Techno Order. Under the leadership of Morven the Immortal, the Techno Order seeks to decimate everything standing in the way of their leader’s dominion over all lands, which includes ancient deities of the forest.

The angry forest god therefore revives  Brucie Boy since they now have a common enemy, and gives him a luminous magical sword, an extendable vine that springs from his arm, wooden steaks that shoot from his hand, a wooden shield that grows from his other arm, and other tricks to help him in combat.

Pretty cool story, right? Unfortunately, most of what I just recounted comes off the in-game codex. Almost none of this is told organically through gameplay, and the codex isn’t even accessible from the main menu – for this you have to pause mid-game.

For the most part, Warlander is actually pretty easy on the eyes when bearing in mind that this game was made by such a small studio. Detailed dismemberment physics and ample particle effects give combat encounters a flashy, visceral presentation, and enemies actually look decent in spite of their janky animations and a somewhat generic design. Moreover, the technological monoliths rising amidst the forest and ancient temples make for an interesting and dramatic backdrop to the different settings in which combat takes place.

Cut to the chase

The gameplay involves making your way through a sequence of battles along a ladder that leads all the way up to the final boss: Morven the Immortal himself. In essence, the player enters an arena, slices and dices four to six waves of enemies, makes their way to the exit to save progress, and then moves on to the next combat session.

Warlander has a set number of arenas that get recycled at random throughout the player’s progression rather than procedurally generating the environments themselves (as most rogue-likes tend to do). In other words, the game randomises the order in which you have to tackle each area, rather than randomizing the layout of arenas.

I was actually okay with this since it gradually trains the player to learn how the environment itself can also become a weapon. The repetition of each area creates a subconscious preparedness on where the health orb is, where the best traps are, where the bottlenecks are, and where to hurl enemies back into the abyss.

Raiden would be proud

Much like Metal Gear Rising: Revengence, Warlander has a similar system in which the player can selectively chop up enemies with Jedi-like accuracy. Heads will literally role as you use your eco-friendly lightsaber to decapitate Technos with weaknesses at the neck, or you can chop off a limb to limit their mobility before decapitating them if you prefer.

What’s more, there is a carnivorous tree (‘The devouring Tree’ – enough to make a vegan faint) that Bruce can feed said severed body parts in exchange for upgrades and buffs. As I mentioned, he can gain anything from stamina upgrades, to a vine used for tossing enemies around, or an ability to send his sword spinning through multiple enemies like a buzz saw.

When adding up everything listed so far, it would probably make Warlander sound like a rather competent rogue-like on paper. The game has interesting combat mechanics, it looks decent, and there is a true satisfaction in coming out on top against enemies. 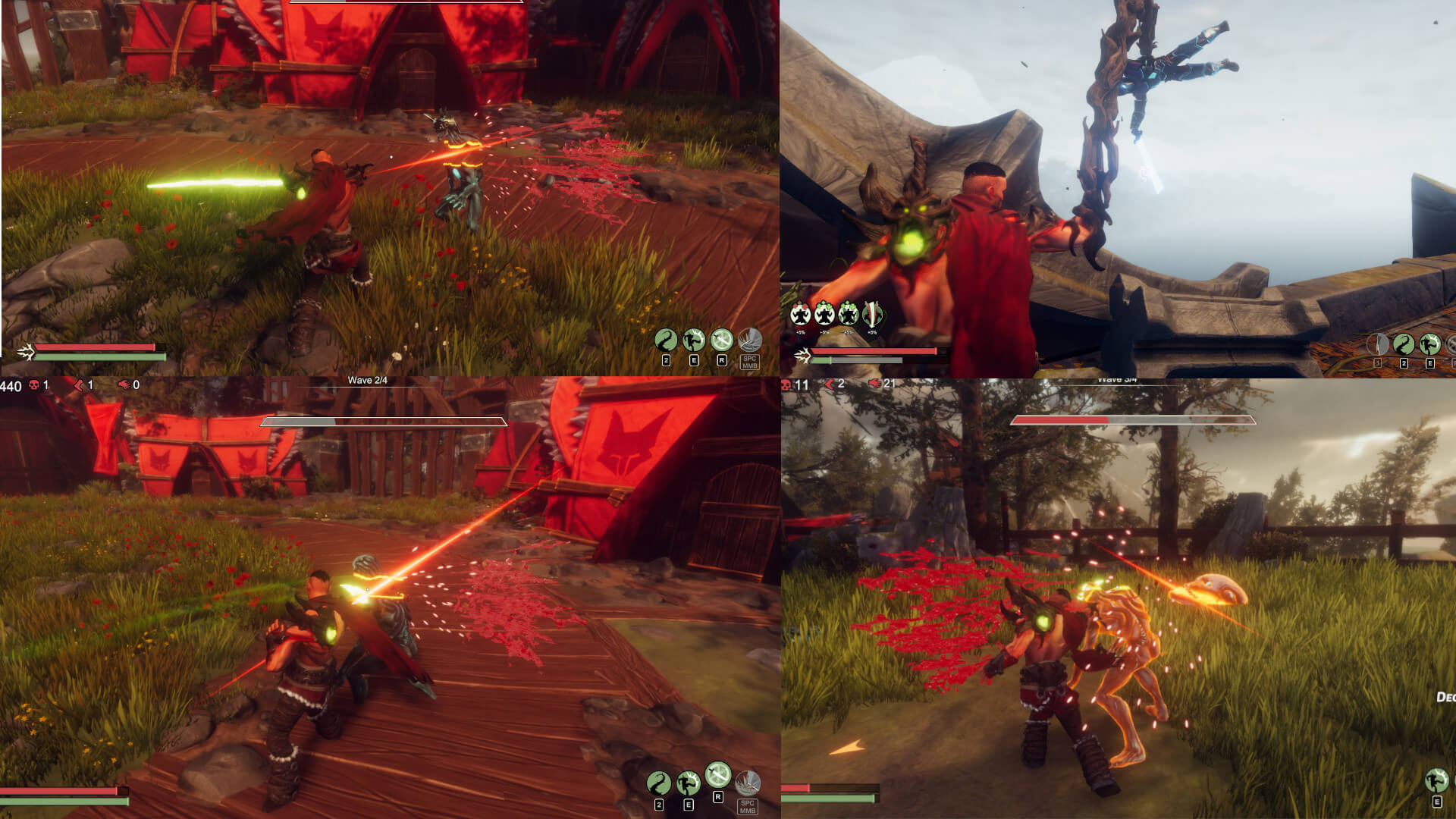 Unfortunately, the wheels come off when the player realises all these elements feel very underdeveloped, or outright broken. From menu screens which appear to use Arial as a font, to the weird, meaningless bits of banter between Bruce and his sword, much of Warlander smacks of a game that was probably squashed into a brutal crunch time.

Sure, viciously slicing enemies into chunks of flesh is certainly cool at first, but this is soon overshadowed by Bruce’s indescribably clumsy sword strikes and cumbersome movement speed. He is so unresponsive that you’d think his glowy, forest sword must weight a ton, and there is only the option of a left or right swing with absolutely no ability for even basic combos.

Above all, I think our “chieftain” here seriously needs to consider running a few laps around the fields or laying off the cigarettes, because he has the physical stamina of an obese bulldog. Four or five sword slashes and your stamina bar is GONE, leaving Bruce completely defenseless in mid-battle. Nightmare fuel in a rogue-like.

Worst of all have to be the boss fights. These guys move laughably slow, and their AI occasionally stops working during which they stare vacantly at the player while nothing prevents you hacking big greedy chunks off their health bars. They will set off an attack occasionally, but I could see it coming a mile away which removed the last ounce of challenge left in these encounters.

Even the final boss is a total train wreck, but for exactly the opposite reasons. He attacks almost constantly – often with magical spells that can off Bruce in one hit – and he can inexplicably guard almost every sword strike. The only way to deal any meaningful damage is by using ranged attacks, which gives the finger to all your effort in mastering the melee combat system.

Sorry folks, I never beat him. I don’t want to.

A rogue-like is more than random numbers and permadeth mechanics: These mechanics create a style of gameplay design that allows the player to appreciate a sense of constant danger. Rogue-likes are entire games that give the player the opportunity to think ahead, to manage their resources, and, above all, improve their skill by playing the game.

For this reason Warlander is a rogue-like in name only; the essential mechanics of this genre are so unfinished that this game never really comes together in a well-rounded experience. Warlander can offer brief moments of fun swordplay, yet the combat cannot outweigh how many crucial elements are still missing, dysfunctional or incomplete. I don’t have an excuse for why you should play this.