Futuremark is a talented studio. Although their first game, Shattered Horizon, didn’t meet a commercial success and its fan base was really small, it was amazing, addictive and full of great ideas. Needless to say that I was excited when I heard that the company was preparing a new game. But when I found out that Unstoppable Gorg would be a Tower Defense game, I got disappointed. And when I got the chance to,actually play it, I liked and enjoyed it, even though I’m not a fan of this genre. You see, most of the Tower Defense games require a ‘trial and error’ approach and… well… I hate that. And although this approach is pretty evident at the later levels of Unstoppable Gorg, it’s still a lot of fun.

The story of the game is pretty simple. Humans discover an alien civilization and try to make contact. However, those aliens are not friendly at all and start attacking our beloved blue planet. You take the role of Captain Adam and your job is quite simple; to stop once and for all the Unstoppable Gorg.

Graphics wise, the game does not push any boundaries. After all, this is a tower defense game, so we’ll have to judge it with that in mind. Therefore – and as an indie tower defense game – Unstoppable Gorg looks great and is easy on the eyes. Players can zoom-in and admire the detailed spacecrafts and satellites, although I have to say that I’d expected a bit more eye-candy from Futuremark. Nevertheless, Unstoppable Gorg’s aesthetics and art design is awesome and make up for the lack of modern technical/graphical features. It’s not demanding and looks cute, so kudos to Futuremark’s artists. The game certainly looks good but how does it sound? Well, the answer is simple as both the music and the sound effects are top-notch. Moreover, Futuremark has managed to capture perfectly the 50s, with the clever voice acting and the ‘black and white’ cut-scenes. There is really nothing to complain here as everything is as it should be. 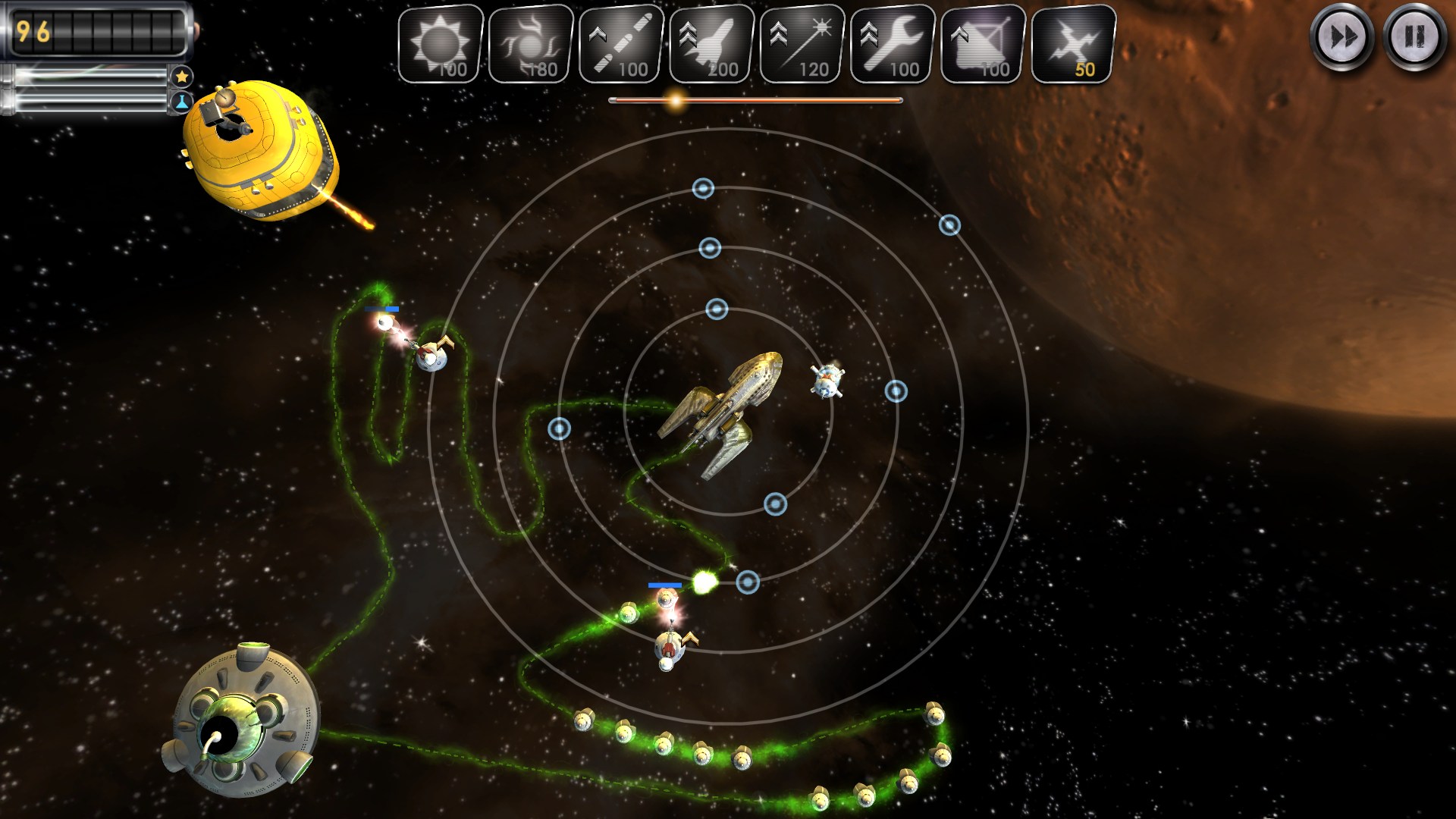 As we said, Unstoppable Gorg is a Tower Defense game with some interesting ideas to keep it more action-y. Instead of stationary towers, players can place their satellites and rotate them around their orbits, thus giving them the ability to create the best defense for each wave. This ability is tricky though as you have to carefully place your satellites in those orbits; misplacement could easily lead to a game over. This is the great thing about Unstoppable Gorg, as you can change, on the fly, your strategy each and every time. Add to this some unique abilities (like slowing down time or protecting your satellites with a defense unit) and the fact that every type of enemy needs a different approach, and you have in your hands an addictive indie title that will keep you busy for a lot of hours.

Unstoppable Gorg comes with three game modes; Story Mode, Challenges and Arcade. Story mode is the main campaign and comes with 21 missions, while Challenges offer you some difficulties/limitations in Skirmishes matches and Arcade is basically a survival mode. Naturally, most of you will jump right into the Story Mode but let me tell you that the Arcade is by far the best mode. Especially at the later levels, you get a swarm of enemies and need to think how to – cleverly – annihilate them. It’s F’ing addictive and I was playing for hours this mode. For the love of God, don’t skip it after finishing the Story mode because it’s fun as hell. 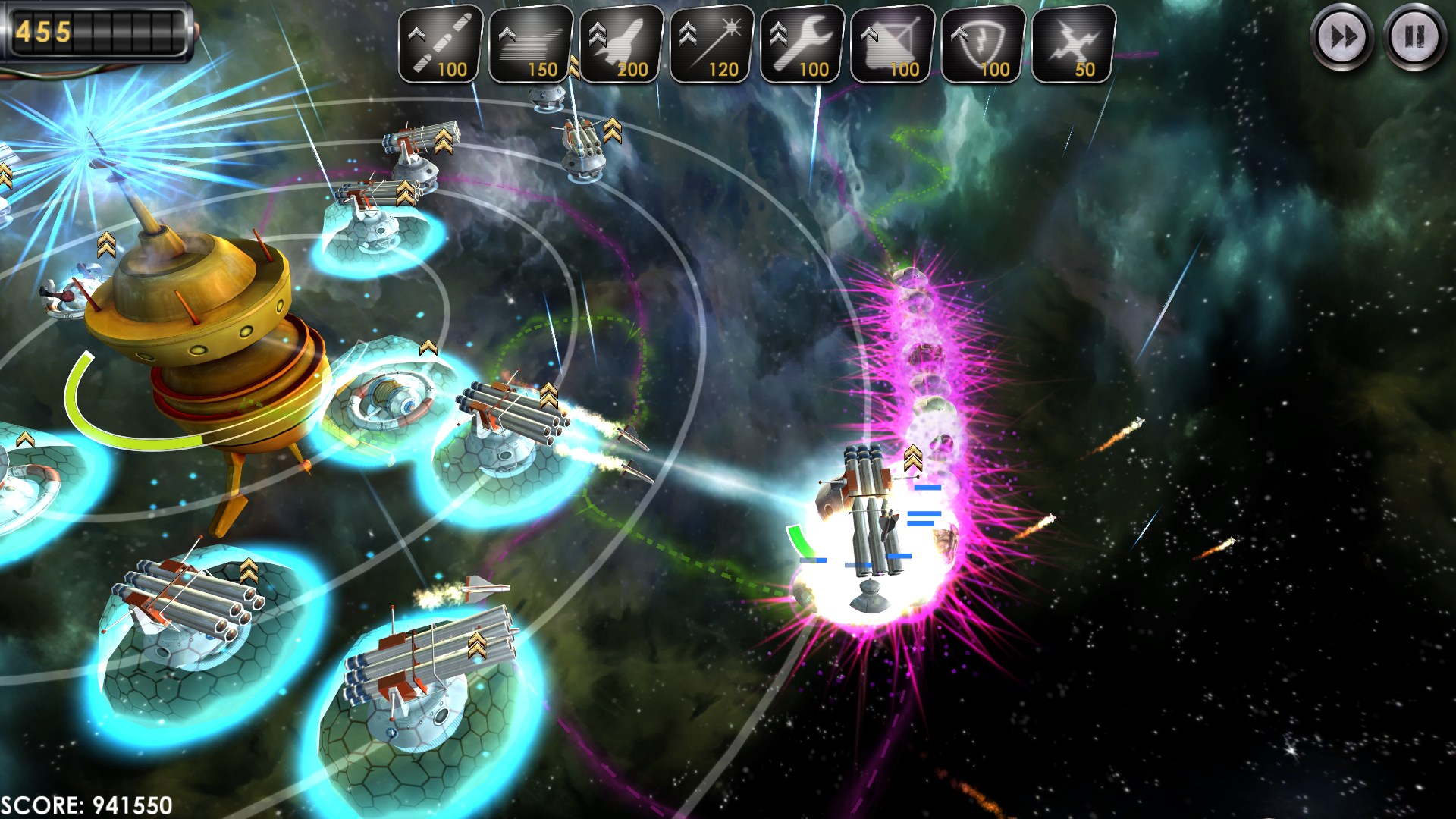 When you start a round, you’re given a number of satellites to choose from. You are limited to a small number, so choose carefully. There are lots of different satellites, from machine guns to defensive shields and rocket launchers. In addition, you’ll be given a number of upgrades with which you can upgrade some of your satellites. These upgrades are essential and can turn the tables at any given time. For example, a number of rocket launchers are not as powerful as you may think, but when fully upgraded – and especially if you have acquired the ability to slow time – they can deal a lot of damage and destroy literally everything. It all comes down to choices and how you want to defend your base. And believe me, there are plenty. It’s up to you to go all out with rocket launchers and radars that increase your launchers’ range, or build a nice defense with laser rays and shotguns that are protected by shields.

Unstoppable Gorg is a casual and addictive indie game. It’s fun, strategic in higher difficulty levels and will cost you only 10 bucks. There is nothing to complain about this game; apart from the fact that it doesn’t push the graphical boundaries, and that I’d want even more missions. Oh, and a multiplayer mode would be interesting.

It is a given that the fans of this genre will buy it instantly. And to those of you that are not fans of this genre, let me remind you this; I’m one of you and I enjoyed it. Unstoppable Gorg is a highly recommended game and will definitely run in a wide range of PCs. This is an addictive and enjoyable game that is easy to learn, yet hard to master, and I can’t find any reason why you shouldn’t get it. So go ahead and purchase it. You won’t regret it!

-Not pushing the graphical boundaries
-No multiplayer
-Not enough missions