Modder Vergis has released an interesting mod for Skyrim that offers additional performance to it. As you may already know, Skyrim is CPU bound and Bethesda didn’t take advantage of multi-cores. In addition, the special effects in this game, like snow and rainfall, are rendered by the already overtaxed CPU and not your GPU. Therefore, Vergis reduced the textures in those particle effects, and witnessed a nice performance boost. Vergis is using an i5-750 CPU and saw a 5-20 FPS improvement. Pretty good huh? You can find the download link as a comparison shot, as well as a video from the game’s Rift area, after the jump.

Those interested can download the mod from here. As the modder notes, there are several versions of this mod of varying performance. In some versions the leaves move quicker, so be sure to take a look to compare the graphic degradation you might notice.

Enjoy the following comparison between Skyrim vanilla and the 128x128 version of Skyrim Performance Plus! 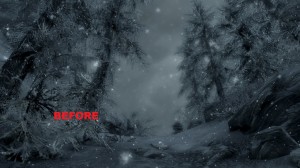 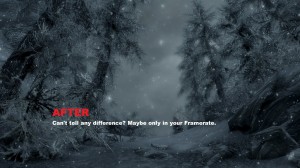