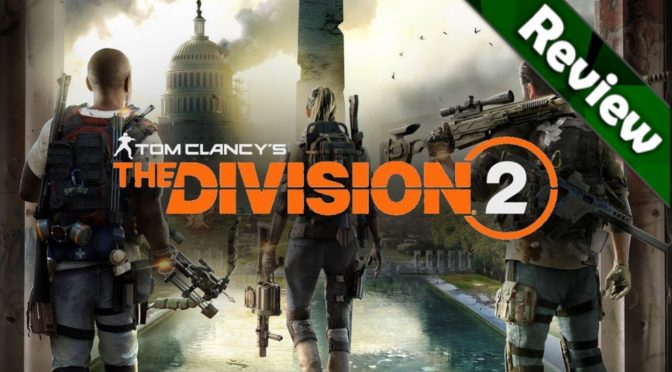 It seems like an eternity since I was last called to service as a Division Agent. It was set shortly after Black Friday, 2015, a date that can’t be erased from my memory. This was the first time I was called to save people and even humanity from a mortally dangerous virus unleashed in the heart of New York on that busy Black Friday.

In the original game there was much exploration through city streets and scavenging of abandoned vehicles. I united with my fellow Division Agents, and after many missions the operation was a success. We did it, together. Now, three years later, I’m yet again called to service as a Division Agent in a new decimated city with whole new threats to humanity. It’s time to once again change our lives, forever.

As a personal note, I’ve been really hoping for a sequel to 2016’s The Division. However, I was a bit worried that a sequel might be like the first at release: great but unfinished and buggy. Plus the original’s end-game was an endless “Dark Zone” grind, which was sort of like a warm but tasteless soup.

Hence, I didn’t want to yet again have to wait for months of patches and DLC to finally experience a complete and engaging experience. Thankfully, The Division 2 avoids these problems, as we’ll soon discuss.

The Division 2 starts exactly 7 months (in-game time) after the first game and throws you into the action without much of a concern about all the things you missed if you didn’t play the first game.

From the beginning the game feels like a tighter and more focused product than the original, but the wonderfully apocalyptic and American-centric blockbuster atmosphere it is still present. And what city could fit better as the setting for American Armageddon than the capital city itself: Washington D.C.!

As for the backstory, the epidemic that began in New York was unable to be contained and it spread to other major cities. Even Washington D.C. has fallen under plague and madness, reaching the President’s very own White House.

Given the bleak setting, sadness and sorrow are ever-present among the survivors, and nature itself is now able to do what it does best: invade and grow. It’s not unusual to find animals running around looking for food or to find plants and grass growing on buildings, roads, and cars.

The original game from 2016 looked great with it’s semi-sparse New York city streets. There was a great Christmas/nighttime atmosphere throughout the game, but for this second installment the developers have made things even greater.

In The Division 2 you’ll find more guns and loot, more missions (main and secondary), and more liveliness overall, be it people, animals, plants, or living centers. Bases are now more populated by survivors, and you can find children playing, singers, and musicians.

Every time you complete a mission you can use various materials or your experience to make life better in the living centers, creating new areas, new playgrounds, and new rooms for example. Everything is more alive than ever, even if the plague’s still there.

For these reasons, I found myself enthralled with the beauty and fantastic level of detail of my surroundings. There’s just so much to find and do as you go from mission to mission.

A large part of the fun in the game is the badass enemies set on killing you and your friends. They feature a more modern artificial intelligence and are much more aggressive in their clever use of the environment. Hordes of these enemies really make your survival harder than ever.

While The Division 2 gives you bigger and better environments, the gameplay controls are virtually the same as the original. This is a fine thing since new players will easily learn the solid controls, which are customizable to suite everyone’s tastes. Veterans will find the same layouts and fall right back in to the enjoyable gameplay loop of the first game.

The game also features great support for either mouse and keyboard or gamepads. This is very welcome for those of us like me who prefer to play with keyboard and mouse at the office and a controller on the couch. (At home I play on my laptop, laying on the couch, while using an Xbox 360 controller, and I have no regrets about this.)

For those who really love the PvP “Dark Zone” location of the first The Division, you’ll love the new take on the “Dark Zones.” This second game gives you three zones placed around the city, so you’ll be able to play in PvP mode with more variety and easy access than ever before.

When finishing the main story in the original The Division, players had the chance to replay missions over and over or compete in the PvP area. This binary option was a bit boring and made the game feel incomplete and unsatisfying to many of us.

In this sequel, the endgame continuously gives you new challenges through encounters with new and stronger enemies (the Black Tusks) and new materials and loot, always better than the previous items.

Even at launch, The Division 2 feels like a complete game, and update after update will continue to add more challenges for those who are strong and brave. If you commit to the game, there’s a potential for seemingly limitless character evolution.

It should be noted that this is an online-only game; being online is mandatory at all times. This game also is much easier when playing in a group. You can try to complete each mission alone, but it’s not ideal. Thanks to a built-in matchmaking system, you can easily join with friends or strangers at every part of the game. Sometimes you’ll also respond to (or send) S.O.S. calls from other players.

On the technical side, the Snowdrop engine’s excellent power is on showcase in this sequel. Graphically, things are great. There’s some texture pop-up, which is sometimes distracting, but this is a minor issue. Overall, the game crafts a credible and vivid Washington D.C. location that’s just as impressive as the original game’s New York.

While there’s very little to complain about regarding the engine or performance, sometimes the game can crash on certain computer setups when using the DX12 renderer, which requires manually editing the config files to restart using the DX11 renderer.

Apart from the crashing issue, using max settings on my 1050 Ti-equipped laptop gave me an average of 30 frames per second without any worries. Reaching areas with many enemies dropped the FPS a little bit, but reducing shadows quality fixed this. The game should run very well on more powerful systems.

I admit I’m not the best shooter player, and after 7 hours I was still at level 6. I’ve died many times on missions, even with the help of other players. But it doesn’t matter how many times I die, lose, and retry. I always feel that I’m evolving, and I think each play session is rewarding for players. This means even newbies will not have to worry about the sense of failure that comes with less forgiving games.

In conclusion, the first game started something interesting but this second one delivers on the promise. What began as a more bare-bones franchise has developed into a robust looter-shooter that makes everything bigger, better, and more interesting.

Since booting it up, it feels like a complete game that will continue to get even better down the road. I feel this is the perfect mix between strong story missions (even if filled some clich?s), an interesting PvE open world, and competitive PvP modes.

I have never been to Washington D.C., but after playing The Division 2 I’m sure I’ll feel some d?j? vu if I ever do visit. I feel like I’ve lived in the city and experienced so much, eliminating the bad guys and saving countless lives. The Division 2, with its Washington D.C. setting, is a truly unforgettable and unmissable experience.

Playtime: 20 hours total (and counting). Mathieu has not completed the game, but he’s still playing it!