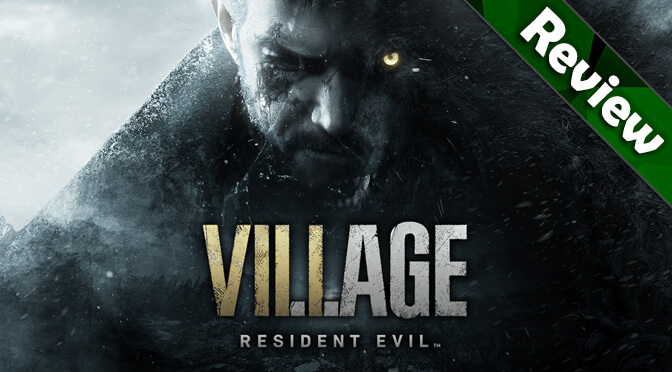 Resident Evil Village is engaging and fun, but it can’t escape the obvious comparisons to past games in the series. Still, new players will find much to love in this accessible and carefully scripted ‘theme park’ adventure. For longtime fans, Village may feel a bit too familiar, like a curious knock-off of prior games.

From the start, Village draws you in with its excellent art style and gorgeous, detailed environments. The story begins with family mystery, and what unfolds is a blend of fairy tale fantasy and survival horror. The pacing is very good, offering a steady stream of new places to see, enemies to shoot, and puzzles to solve.

The gameplay is never too challenging or taxing and even a bit simplistic. Hence, Village is easily the most newbie friendly Resident Evil to date, even occasionally going Call of Duty at certain points.

So, is Village worth your time? If you’re a hardcore Resident Evil fan like me, you’ve probably already played and beaten it. I’m on my third playthrough, obsessively unlocking all the extras, like I have done for all the recent series entries.

However, if you’re more casually interested, I’d recommend waiting for a discount. It’s a solid video game, but it doesn’t offer much that hasn’t been seen before. Let’s dive a bit deeper, beginning with some problems.

Another benefit to waiting to play relates to the PC version issues, including serious framerate drops (choppy slow-motion) at key moments of the game. There’s noticeable hitching upon delivering the final death blow to most enemies.

Even worse, the current lack of adjustable FOV (field of view) will give many players headaches or motion sickness. Being forced to use a third-party program (Fluffy Manager) to change the FOV and disable the annoying vignette screen overlay is unacceptable.

The technical issues are a real shame because Village’s RE Engine generally runs superbly (and scales well on most hardware). The graphics are very impressive and greatly aid the world immersion.

The lighting engine is fantastic, like in the prior games. My only complaint is the forced de-saturation (removal of color) in most of the game’s locations, which takes away from the visual appeal.

Realistic NPCs and facial animations are another stand-out graphical feature, but the actual content of those characters is questionable. Simply put, Village’s main baddies are underdeveloped and disappointing, despite several of them being potentially very interesting. The internet’s favorite, Lady D, has a large but woefully fleeting presence.

In fact, all the villains are here for a moment and then gone. I suppose this on to the next thing pacing fits the intentional theme park design the developers spoke of in interviews, but it doesn’t leave much narrative to sink your teeth into.

Most plot events in Village are contrived and nonsensical, happening as devices to keep you playing. Consider the horror aspects. You face spooky vampire-witches, creepy dolls, large-fanged werewolves, and other monstrosities. Why? Because why not? The same goes with the locations. A quaint village hub. An imposing castle. A twisted factory. Dank caverns aplenty. Sure, fine, whatever. A theme park doesn’t have to make sense; it just needs to keep you entertained in the moment.

As far as the overall series lore, Village is a bit disappointing. There’s barely any connection to prior games, apart from RE7 (Village is a direct sequel to RE7). The only returning fan-favorite character is Chris. His screen time is very limited, but he still manages to be massively more charismatic than the dull main character, Ethan.

The audio and music are passable but not remarkable. The ending credits song is haunting and nice, though. Several characters had lip-syncing issues for me, relating to the technical problems on PC.

Inventory management is much better than prior games. You can hold key items separately without cluttering your inventory. I almost never had to play inventory Tetris.

Much time will be spent checking your map over and over, to ensure all items are found and no treasure is left undiscovered.

You can hunt some animals and use them for permanent character upgrades. It sounds nice, but it’s super-simple and hardly worth mentioning.

There are an insane number of ladders in this game. Countless times you’ll be forced to watch Ethan slowly climb ladders in cumbersome first-person view. So boring. Worst part of the game.

Mercenaries returns as an unlockable mode after you beat the game. It’s an arcade-style mini-game focuses solely on killing enemies quickly. It’s nice fun for a few hours, but it lacks the depth of RE4 or RE5. Part of the issue is the lack of enemy and level variety. Another issue is limited close-quarters-combat (CQC) moves (Ethan can only do an awkward kick-push after blocking).

Much like RE4, currency returns along with purchasable gun upgrades. It’s enjoyable to slowly reach maximum power with all guns after several playthroughs.

As expected, there are several difficulty levels, and the game is meant to be replayed numerous times. You can unlock infinite ammo and use such legal cheats on subsequent playthroughs. It will likely take about 40 hours to unlock everything and get all achievements.

Village is sort of a cobbled-together greatest hits of Resident Evil, a taste of all that has been amazing about this 25-year-old series. Start with the rustic village atmosphere of RE4. Mix in the horror of RE7. Add in the intense combat focus of RE5. Don’t forget morsels of room-by-room item hunting and old-school puzzling, a la RE1 and RE2. Fortunately, they left the repulsiveness of RE6 off the menu.

Less fortunately, some of the series charm seems to have also oozed out. I often wished for Leon, Chris, Claire, or Jill to take center stage and bring some much needed charisma to the experience.

Nevertheless, I greatly enjoyed playing Village, even while aware of its formulaic and clichéd shortcomings. Plus, we only get to dine on new Resident Evil games every so often, so I’ll eat what is served, even if some of the flavor isn’t there.

Perhaps one of the greatest compliments I can give Village is that I’m still enjoying playing it after finishing it twice. Plus, it made me want to go replay RE2, RE4, RE5, and RE7 again. Speaking of, if you haven’t played those yet, go feast on them. Village will still be here down the road, and perhaps the technical issues will be patched. A bit more story content would also be nice to flesh out the experience.

If I were giving a numerical score, Village would likely get a 7 or 8 from me. It’s good and even great at times. It’s just not the greatest. Now go channel your inner werewolf and tear each other apart in the comments about which Resident Evil is, in fact, the best.

Playtime: 28+ hours total. Nick spent 12 hours leisurely completing the Standard difficulty level. Then he got an infinite ammo gun and blasted through Hardcore in 6 hours. About 5 hours were spent in Mercenaries mode. A playthrough on the hardest difficulty has been started, and a final playthrough will happen sometime in the future to unlock all Achievements.