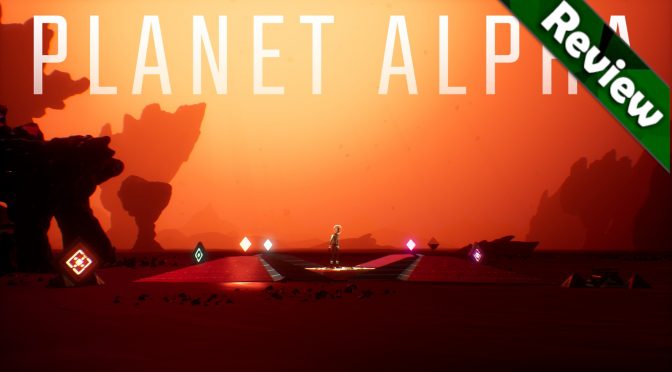 The 2D, side-scrolling masterpiece, Limbo, took many players by surprise upon its launch in 2010. Using only a minimalistic visual style and without resorting to any exposition, the game somehow managed to draw a deeply moving experience out of a short puzzle-platformer. In fact, Limbo added new fire to the debate on whether or not video games can be regarded as art.

The developers, Playdead, showed gamers how a story can be built from the strategic use of muted backdrops, ambient sounds and an ominous sense of danger that surrounds a very vulnerable protagonist. If anything, Limbo drew players’ attention to a oft-forgotten component in how we experience a game: Atmosphere. The result was a fresh and unique way of immersion into the game’s world, and several other titles have tried to emulate the experience since then.

Planet Alpha hearkens back to Playdead’s reliance on atmosphere as it is a 2.5D, side-scrolling puzzle-platformer from Danish studio, Planet Alpha ApS, which recently saw its full release on Steam. The gameplay also features a silent protagonist that players must guide across a hostile landscape, although this game has a markedly different approach in how players are immersed into its world.

Much like Limbo, the game’s story was never revealed to me overtly, and I had to piece together the central plot by progressing through the different chapters. While being a bit lost at times, I could eventually infer that the protagonist is an astronaut that must rescue a lush, verdant planet from an invasion by evil robots.

For some reason, the planet’s salvation against its grotesque, mechanical intruders lies in activating insignia, which I suppose represent the four elements. However, these symbols are located in remote places, and must be triggered by a nimble entity with the ability to control the time of day. This just so happens to be the power of our little alien friend, so it falls upon him/it to reach these symbols and rescue the planet. No pressure, right!

The gameplay encompasses just about everything you could expect from an atmospheric, puzzle-platformer of this kind. Your only controls apart from movement, are jump and interact, and the latter generally serves the purpose of dragging things around as a stepping stone, or flipping the occasional switch. There are also sequences where the player will face the invading robots, and some basic stealth manoeuvres are needed to circumvent them.

The ability to control day and night forms an additional layer of interactivity within the game’s platforming mechanics since the planet’s bizarre-looking vegetation is highly reactive to light. Having control over sunlight and darkness thus represents a useful talent, especially if you want to use the environment to your advantage.

Changing the time to day can spawn various kinds of fungi that our little bulb-headed friend can use as platforms to reach higher places. In contrast, turning the scene to night sprouts, among others, leafy plants that boost his running speed – a useful trick for jumping across wider chasms. Also, did I mention the giant, stinging bugs on this planet? Daylight is essential to open these flowery… things as a diversion so that you can scurry past once the insectomorphs feast on the flower’s nectar.

The control over day and night creates some interesting puzzles at times, but it also makes the world around the protagonist feel incredibly organic and lively. Again, it is atmosphere that really steals the show here, and the breathtakingly beautiful scenery must have taken such a small studio hours to create. Those attempting to play this on a 4K monitor will surely get a gorgeous return on their investment.

Some of the more beautiful sections take place in sprawling, bioluminescent jungles with glowing plants protruding from every surface as if they didn’t make the final cut of Avatar. These are juxtaposed with traversal through open grass planes in which gigantic, dinosaur-like aliens graze majestically in the background. Other sections take you deep below the surface to the nests of the stinging bugs, and the only sources of light are their glowing eggs (along with the occasional  luminescent jellyfish floating overhead).

Yet, for all the vibrant aesthetics on display, I could tell Planet Alpha develops some unforgivable pacing issues during the first half of gameplay. This happens mostly between the puzzle sequences when nothing seems to hint at any real sense of danger along the platforming routes. These sections just seem a little inconsequential, and I feel like the incessant climbing is only meant to artificially lengthen the game’s play time.

Making it worse is that the main character is a rather bland and uninteresting fellow. In fact, he bears an uncanny resemblance to the Unreal Engine 4’s placeholder mannequins that you see running through early demos of a game’s development. This is a shame since likable and strong protagonists in platforming games can really have a strong effect. Sadly, our little space man here sometimes just looks as if he stumbled into the wrong game.

Nevertheless, the latter chapters show that team Planet Alpha still has a firm grasp on what makes a decent platforming experience. Here the action gains a much better momentum and the limits of the mini-cosmonaut’s acrobatics are tested more thoroughly. If the more protracted bits had been removed from the final version, these sections might have balanced out the overall game nicely.

Maybe this is the stealth fanboy in me talking, but the encounters with robo-baddies were generally exciting too. They may look as if they come out of a 1950’s B-movie, but being spotted means instant death, and here the day/night mechanic serves to create cover with the plants. These moments play as tiny puzzle sections in themselves and provide a welcome break between dragging around stepping stones and solitary jumping.

If you think you can appreciate gems such as Little Nightmares, Inside or perhaps Unravel, Planet Alpha should be right up your alley. It is true that the aforementioned titles are perhaps more refined experiences if only because they offer better pacing with more intuitive puzzle designs. However, Planet Alpha is highly aware of its influences even if the game sometimes stumbles a bit to honour them. Try it if you like pretty things and you want to flex the muscles on that brand-new 4K panel.