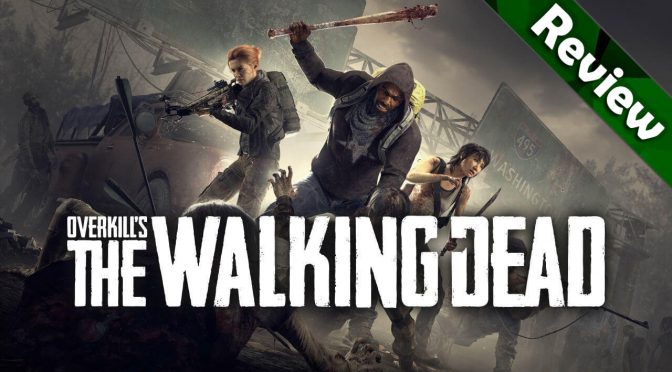 I love zombies; Dawn of the Dead is one of my favourite films and the first Resident Evil is one of my favourite games. I have played too many zombie games and even if the whole zombie genre is becoming a bit tiresome, in general, I still enjoy playing them… well most of them. I am also a huge fan of the TV show, even if the latest seasons dropped in quality. I have played all of Telltale’s (RIP) games except the final season and I even played “Survival Instinct” – oh yes I did.

So you see my threshold is pretty high regarding this particular genre, especially when a game takes place in a post-apocalyptic time and place. Overkill’s The Walking Dead might not be a game that deserves the franchise name. It is not “Survival Instinct” but it also isn’t Telltale’s first The Walking Dead season. The game has many flaws and only a handful of good things.

In case you didn’t know, Overkill’s The Walking Dead is a cooperative first person melee/shooter with some RPG elements. It is almost impossible to solo this game and in all honestly it feels like a chore. The game is made to be played with other players, preferably with friends. This is not a game you want to play with random players so keep that in mind (you can thank me later).

Performance wise the game runs OK and in order to maintain a stable 60fps experience, I had to lower some settings. Unfortunately the borderless fullscreen in combination with the in-game framerate limiter introduced some latency issues, which forced me back to the regular fullscreen mode with vertical sync. Even if I don’t like v-sync and I usually avoid enabling it, this time it did indeed fix my problem, which to be honest I found a bit weird. Speaking of weird I had another problem that led me to the conclusion that the video settings are kind of bugged. If I put everything on the low preset I have something like one hundred fps and if I manually put everything on low I have something like seventy five fps.

As for the visuals, the game looks fine and only the 3D models look like crap. I mean seriously take a look at Maya’s face which looks absolutely horrific. Seriously, some walkers look better than it. If you guys are looking for more information regarding the game’s performance you can check our PC Performance Analysis.

The story is laughable and it’s like a bad copy-paste of the TV series. In fact, the story at some point does something that I have never seen in a game before; not something cool but something completely stupid and unnecessary but for the sake of spoilers I will not get into it (trust me you will understand what I am talking about when you reach that point). That is if you actually play the game.

The shooting mechanics are decent and they work just fine even though shooting is not recommended due to the noise. Yes, noise is a huge factor and has tremendous impact on the gameplay. There are three noise levels and each level brings more zombies, with the final level bringing an endless horde. As you may have guessed, your gunshots can make a lot of noise that will attract zombies, as well as car alarms and enemy fire.

As such, the game forces you to be stealthy, either by using a weapon silencer or a melee weapon. You can basically use weapons for the human enemies and melee for the undead enemies. By doing so, you will increase your chances of survival. Of course this is your choice; you can always go full mental like Carl Grimes but ammunition and health is very limited. The best matches I had were those that I played in full stealth with knife take-downs and silent kills all the way. In my opinion, the game is much more enjoyable that way and here is my biggest gripe with the game; the melee combat.

I do know that first person melee combat is not easy. Few games have done it right and even fewer have exceeded, like Dark Messiah or Dying Light. While the gore is OK – it could be better – the melee is atrocious and “floaty” as hell. In other words, all the melee weapons are missing the necessary impact so they can feel right or realistic. For instance, there are like four animations and as a result of that most hits don’t feel satisfying at all. The weapon/hit feedback is minimal and the reaction animations from your enemies are mediocre. In short, it sucks and I doubt the developers will improve it with future patches.

There is also an enemy grab mechanic similar to the one found in “Survival Instinct”. Instead of getting hit by zombies, you get grabbed and the game puts you in a stabby mini-game where you stab the crap out of some zombie’s butt ugly face or simply push it away.

Sometimes, if you get swarmed and do not shove you will get downed; even if you are on full health. When that happens, your only chance of survival is to be rescued by another player. While I kinda like this mechanic, it is not perfect and while there are several stealth finishing animations there is only one for the grabby mini-game which happens far more often. To be honest, this mechanic was better in “Survival Instinct”.

There are four different classes, each one with specific weapons or skills. You can still choose whatever you please to use but you will not get the bonuses. For example, if your character specializes in shotguns and you carry a rifle you will not get the extra damage bonus. There is also a skill tree which feels pretty basic with many skills to choose from. Some of the skills are pretty useless in my opinion like the “5% quicker reload” skill; they are unnecessary, especially when there is weapon customization in the game.

There is also weapon degradation, meaning you will have to maintain your weapons in good condition otherwise they will jam during gameplay. Of course this is another unnecessary mechanic (even if it looks cool) to push the grinding, just like the base building. Yes the game also has base building and you can build your home-base by collecting the necessary resources by playing the available missions.

In order to advance in the main story you will have to upgrade your base, however sometimes resources will not be enough to do so and you will have to grind by replaying missions. When you finish a mission, and in order for you to receive your reward, you will have to load the home-base map and speak to the leader. You will have to do this every fucking time. Seriously, who thought of that? Also I am getting sick of games that make bodies disappear. I mean, what the actual hell? It takes away the feeling of accomplishment as you cannot see all those dead bodies you had to put down during your end battle. Seriously, come oooooon… even Call of Duty did this 15 or so years ago.

I will be honest, I did have fun with this game though as I said I am a sucker for zombie and stealth games. I have more than four hundred hours playtime with Left For Dead 1 and 2, and this is basically an over-complicated Left For Dead clone with slower gameplay. I should also mention that the matchmaking is crappy and that I had several disconnections, long loading screens and several bugged missions.

Unfortunately this game did not reach my expectations and doubt I will ever come back for more. Like I said, I had fun but one playthrough was more than enough. If you are a fan of this genre and you have some friends who are willing to play the game then you might have some fun. If you are looking to solo it or you want a more traditional/faster gameplay then forget about it and save your money.

PS: There have been a couple of patches the last few days which I did not get the chance to try them out since last Friday.