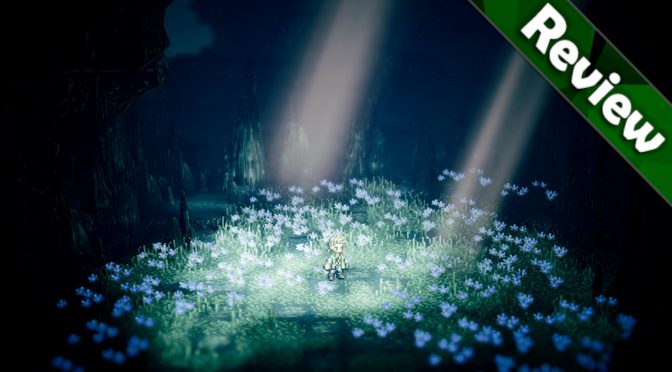 I am one of those weirdos who buys JRPG’s off the Android store rather than taking refuge in the haven of emulation. Many frown when I tell them this, and some check if I remembered to take my medication. Fact is, the Android store has built up a really decent selection, and these days I can often be found curled up on the couch, working my way through the classics on my tablet.

Through sheer coincidence I had just finished Dragon Quest IV, and it was fresh off this experience that I fired up my review copy of Octopath Traveller. After making my way through close to fifty hours or so in Octopath’s unforgettable world, I kept noticing the striking similarities it shares with the fourth Dragon Quest game, but also with many JRPG’s of the nineties in general.

Initially I thought this similarity was due to Square Enix and Acquire being lazy, and that this game is flying dangerously close to cliché territory. After playing Octopath Traveller for myself, however, I realised this game is quite the opposite. It has everything we loved about the golden days of JRPG’s, but with a few tweaks, refinements and innovations that turns the experience into a ‘love letter’ for the genre as many have said.

In summary, this game is exceptional, and now that we finally have a chance to play it on our favourite platform, I feel like no collection will be complete without it. I finally get why Nintendo insisted on Octopath Traveller as a timed Switch release since I know people who bought their console just to play this game.

I wasn’t being cute when I mentioned there are some hilarious resemblances between Dragon Quest IV and Octopath Traveller; you could easily write a whole article just comparing the two. Basically, Octopath Traveller takes the character driven chapters from the opening sections of DQ IV, and inflates it to fill an entire game. As such, this is one of those JRPG’s driven forwards by its protagonists rather than its narrative.

When the game opens, you are asked to pick your first-in-command, who from then represents the hero/heroine in your party. I measure a game’s consistency by opting for unconventional characters, so I selected Primrose, the dancer and former noblewoman (and nearly an exact copy of DQ IV’s Meena).  Turns out she is also an escort with the ability to ‘allure’ people… definitely a first for me.

Be that as it may, Octopath’s wholehearted committed towards developing its characters is clear from the start.  As the story of Primrose’s life began to unfold, it turned into a heart braking tragedy of seeking her father’s murderer. She has to descend to the lowest, most undignified pits of society to gain clues about the killer.

Okay who was cutting onions in here, dammit!? In any case, the player then takes over her story when she finally makes a break in her search, and I helped her to escape the crummy pleasure house. From there, the player can set off to any of the nearby villages to encounter seven other heroes and heroines that match Primrose’s story of ambition and self-completion.

This is the modus operandi for Octopath from there on in as you will steadily take each of the eight protagonists through the story of reaching their main obsession. As you probably guessed by now, this little companionship eventually begins to recognize how their paths are intertwined. The gang soon figures out that they are being set on a course by higher powers in order bring about the resurrection of a powerful force, and the destruction of the world – about as JRPG as it gets!

The side-missions are rather dull, though. They mostly involve talking to one NPC, and then going through a trial and error system of trying each character’s unique ability on another NPC. For instance, the thief can steal something off them, the merchant can persuade them to trade, or the warrior can duel them.

While it was strangely hilarious challenging a bent-over old woman to a sword duel, I feel like these little side tasks could have been cut altogether; the payoff for their completion was rarely worth the squeeze. The character narratives are the star of the show here, and represent the true meat of the Octopath experience.

It all comes together

When protagonists themselves have to carry the show, they had better be interesting. I can concede that each of the eight narrative threads are not exactly unique – bordering on cliché even – but they have all the heart and depth to match Primrose’s tale. Each character is supported by a well-written and interesting story that the player can complete over four chapters in each story.

This had the pleasant upside of keeping things fresh narrative wise. Many RPG’s tend to make the player do the work to keep up with their narratives and lore which is nice when it works organically, but there is always the risk of shattering the player’s  immersion when they loose track of how the game’s story is pieced together.

By moving the story forwards one character at a time, Octopath finds a welcome alternative to this hazard. By the time the player has filled up the whole gang, each and every character feels like an old friend, like the player really knows them.

Unfortunately, it is here where Octopath also makes its biggest mistake, namely characters feel almost completely cut off from one another. They never appear in each other’s cut scenes, and your party will be limited, in most cases, to four players at a time. Jason Schreier in his Kotaku review made the remark that the game might as well be called ‘Quadpath Traveller,’ and I feel inclined to agree.

I get that having eight people crowded together on screen might not have worked, but the interactions between the heroes themselves are far too sparse. The game never really explores why a thief, merchant, apothecary, exotic dancer and a hunter would want to work together.

Worst of all, the experience you get from completing quests and defeating enemies is not shared with idle party members. I can imagine many players will find themselves swinging around a broad sword with a level 50 fighter, who has to babysit a level 18 merchant or apothecary during the final moments of gameplay. At least this compels the player to circulate more often between party members, which in turn prevents sinking into that grinding slump where the same attacks are used over and over again.

These are few of my favourite things

I do not own a Nintendo Switch, so up until now my experience with this game was mostly with play-throughs on YouTube. I therefore never realised how these videos utterly failed to translate the beauty on display in this game. Perhaps it is the fact that my modest PC can run it in 4K at buttery-smooth frame rates, but now that I actually have it playing out in front of me, I must say I have never experienced anything quite like this.

Octopath really is a landmark game in terms of how modern tech can fuse 2D sprites with 3D visual effects. The characters and in-game assets are virtually indistinguishable from what was on our screens in the late nineties, however the shadows, depth of field and lighting effects are all in 3D. It makes that old, pixel art style come to life in a way that dropped my jaw, and when you add the vignette effect on the edges of the screen, the overall look is almost dreamlike.

Then there is the audio. Boys and girls read this carefully because I do not say this lightly: This is the best music I have ever experienced in a role-playing game. It ranges from enthralling, up-beat, folk style guitar jingles matching the lawless cliff side landscapes, to lonesome, harp-infused overtures in the mystical forests scenes.

Then there are full, orchestral symphonies to heighten the more sharp and intense moments during battles and dramatic plot moments. It makes for a stunning, aural backdrop to your gameplay, and it is worth the price of admission alone.

I should point out that I found the cast far too chatty during battles, though, and perhaps this is mostly due to how repetitive their lines are. I can only hear Olberic yell “My blade is UNBENDING!” so many times, and the same goes for that awkward giggle Therion makes every time it comes to his turn to fight. Just turn down the dialogue volume I guess, which is a shame in light of the solid voice acting.

There is no need for me to go into the specifics of how the combat mechanics work as it is bog-standard, turn-based battles. The menus for selecting actions, spells and attacks are unusually streamlined and intuitive, but that’s about all that distinguishes them from most games of this kind.

What is actually worth explaining are the three distinct layers Square Enix and Acquire have built into the combat encounters. One layer is the offensive or defensive moves you act out towards enemies, the second is the boost points.

In Dragon Ball Z style, you can boost offensive or defensive moves by ‘charging up’ a character very much like Goku. Every turn grants you a free boost, and you can augment your character’s abilities up to a maximum of three levels at once. Whereas a sword attack or a lightning strike attack might normally do 20 damage for instance, it might do 35 at a level two boost, or 45 at a level three boost if the player so chooses to spend their boost points.

Then there is the ‘break’ system which is the game’s strategy to familiarise the player with enemy weaknesses. Each enemy appears on screen accompanied by a shield displaying a number. When the player attacks this enemy’s weaknesses directly, this number drops steadily to zero. This is when the enemy experiences a resistance ‘break,’ meaning that they are stunned for a whole round of turns.

All three layers add up to a really engaging meta-combat experience that ensures skilled turned-based veterans can refine the protagonists into a killing squad without the risk of newcomers being overwhelmed. I just wish that battles were somehow not random since they occur just a tad too frequently on the world maps. I would be hard pressed to call Octopath grindy, but repetitive again springs to mind.

One of the classics

I know I make Octopath Traveller sound like the perfect game. It’s not, but I think its first reception back in July 2018 was overly harsh. ‘Squeenix’ and Acquire have done a great job with bringing the unforgiving and cryptic JRPG experience of the early nineties forward a few generations. They have somehow kept the essence of these games alive in a palpable way, but made it extremely accessible for more modern audiences.

Octopath Traveller looks absolutely gorgeous, is a musical masterpiece and never tries to overcomplicate things. It is rare that hard-core Final Fantasy and Persona fanboys can share a table with the more casual players who only dabble in this genre from time to time. In this case, Octopath makes one heck of a conversation piece, and it only weighs in at 3.5GB!

Playtime: About 54 hours . Admittedly this was a bit of a rushed playthrough, and I would recommend investing in leveling up