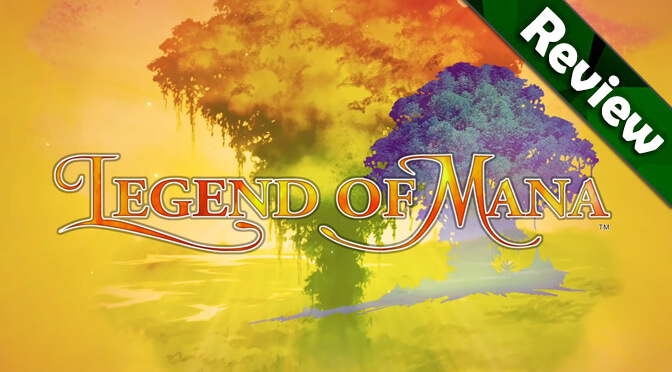 Originally an action-adventure RPG released in 1999 for the PlayStation, this virtually identical re-release of Legend of Mana is an imaginative banquet of charm, creativity, and quirkiness. It’s also not worth playing, as much as it pains me to say. While the colorful worlds, endearing cast, and gorgeous soundtrack are big draws, the painfully clunky combat, maze-like environments, and obtuse quest designs make Legend of Mana an overall drag of an experience.

The Good: All the Artistic Stuff

Legend of Mana is gorgeous in just about every way. The 2D backgrounds are lush and detailed, having been upscaled and re-rendered for this version. Every location is a vibrant joy to behold. Character designs are bold and inventive. Although, the untouched PS1-era 2D pixel-art sprites for characters and monsters are visually hard to read and look out of place next to the high-resolution backgrounds.

The soundtrack is a standout feature. Newly recorded with actual instrumentation, Legend of Mana features some of the best JRPG music tracks of all time, in my opinion. Enjoy this two-minute official sample of the game’s music.

As for the story, Legend of Mana is less of a grand ‘save the world’ tale. Rather, the game is a collection of 60-odd short stories, almost like a book of fairytales. There are several key character arcs, but there is no attempt to tie everything together. In this way, Legend of Mana is very experimental and unique in its approach. Even some 20 years later, there’s nothing quite like it. The boldness and daring of its narrative and world-building are strong selling points for the game.

The dialogue is another massive selling point. The game is genuinely funny, in a heartfelt yet bizarre way. Dozens upon dozens of quotable lines will be thrown at you when you least expect it. “Don’t glare at us. We don’t want to explode!” Or “Cowardice is the better part of valor.” Consider the greatest threat to any robot: “I’ll redesign you!”

Other phrases are more heartfelt: “People with pure hearts can go to a whole new world.” Some lines make little sense: “You will understand, once you become a rock.” Bleakness pops up: “There’s nothing good about life.” Important clarifications abound: “I’m not a chicken. I’m a CANARY!” Instructions on emotion expression are helpful: “Dudbears, you may cry now!”

I’d tell you that all those lines will make sense once you play the game, but they won’t. They simply won’t. Still, I daresay it’s the cliché-subverting character dialogue that has made Legend of Mana such a cult classic. You just never know what’s around the corner when interacting with a new NPC. For those who lean toward the literary, it’s positively magnificent.

The Bad: The Actual Gameplay

If I were to judge Legend of Mana on creativity alone, the game would be a 10 out of 10. Unfortunately, all the fantastic artistic stuff is shackled to the dreadful play experience. For starters, the game engine stutters and runs at very low framerates.

There’s something extra sad about a year-1999 game being unable to achieve a smooth framerate. Much of this has to do with the 2D sprite animations being tied to very low framerates, but even special effects can cause the engine to chug. At least it never once crashed, and I experienced no glitches.

This re-release also keeps all the obtuse, mystifying, and downright vexing gameplay systems of the original. Legend of Mana features item crafting, equipment forging, golem building, monster catching, and a musical instrument system. But all this stuff is mostly a waste of time and not needed. It’s classic overdesign made worse by slow, inefficient menus.

Even worse is the combat. The battles are dreadful, even for year-1999 standards. It feels like you’re moving in molasses. Attacks have sloth-like momentum. Special attacks have stupidly long charge-up times. After enough hours you’ll get used to the issues, but combat is never crisp, responsive, or precise.

It’s a darn shame that Square Enix didn’t update the combat system to modern standards. Actually, it’s pathetic because both the recent Mana-series remakes (Secret of Mana, 2018; Trials of Mana, 2020) and their original Super Nintendo versions (1993 and 1995) have fantastic combat. Hence, Square Enix should be called out for not even attempting to improve what is obviously a massive weak point. The only saving grace is the option to entirely disable enemy encounters, leaving only boss fights and other one-off battles.

Turning off enemy encounters is also needed since the level design is often maze-like and obnoxious. There is no map, and some dungeons have countless rooms that look very much the same. Many quests require you to scour every room for an object or NPC. You’ll be backtracking and going through the same areas over and over unless you happen to luck out or are using a guide. Speaking of guides…

The Really Bad: Outside Guides Needed

The most unforgivable sin of Legend of Mana is the virtual requirement to use external guides while playing the game. You simply will never, NOT EVER, figure out how to unlock many quests and story segments without carefully following a walkthrough, such as the guide at legendofmana.info. Let me explain why.

Modern games are carefully designed to not lock players out of content for arbitrary reasons. Legend of Mana is the opposite. It gives you the ‘freedom’ to build your own map by placing items (called Artifacts) on the world map. This sounds great, except you, the player, have no way of knowing the permanent repercussions of certain map configurations.

Legend of Mana is like a bad 1990s point-and-click adventure with illogical and inscrutable quest design. At least there is a New Game Plus mode, which lets you carry over your gear and level. The missed quests can be done again on the next playthrough. Still, it’s a shame that you have basically zero chance of experiencing the full 60-plus quests without external help.

All in all, Legend of Mana is a work of art chained to a bad gameplay experience. It’s not too fun to carefully follow online guides while slogging through Legend of Mana’s clunky combat and stuttering, low-framerate game engine. This fatiguing effort grinds the game down and poisons the innovative charm, delightful dialogue, and vibrant beauty of Legend of Mana.

If only this re-release could have been a proper remake that removed all the circa-1999 clunk and gunk. Alas, it is not so, and I cannot recommend Legend of Mana to pretty much anyone, even at a discount price. Only those who wish to knowingly endure bad gameplay for the sake of a higher, completionist purpose should attempt Legend of Mana. A pity, really.

“Oh, Legend of Mana, I wanted to love you,
and I did when you were imaginative and sublime.
Then you were frustrating and poorly designed.
External guides unlocked your hidden wonders,
but all was too tiresome by then to truly feast on such delights.
Thank you, anyway, for being so eccentrically you.”

Playtime: 24 hours total. Nick spent 24 hours finishing the game and about 85% of the quests (using a guide toward the end).