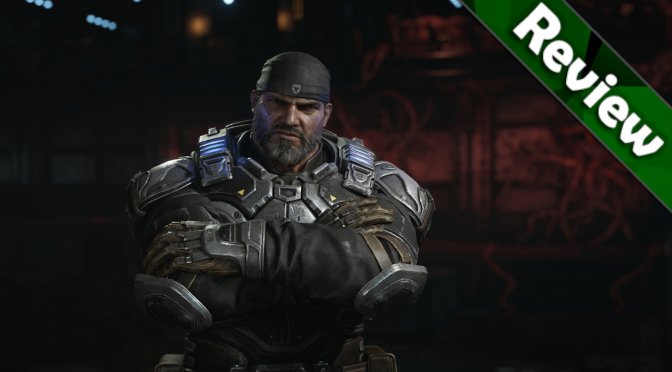 Spring has arrived in my village. Birds are chirping, flowers are everywhere, and cafés are packed with customers sipping beers in complete absorption of the Rugby World Cup. Meanwhile, I am locked away in my apartment from the both the frivolities of sports fans and the beauty of nature while the sounds of gunfire and chainsaws constantly blare from my darkened room.

While an unenlightened passer-by might think the time has finally come to call the orderlies with the padded van, gamers would know right away that I am playing the latest masterpiece from The Coalition – Gears 5. I guess the whole ‘War’ thing has been dragging on for so long that the planet Sera considers conflict to be the norm, so now it’s just Gears.

Pointless title alterations aside, Gears 5 proves that even the mass public opinion can be right about some things. After once-again donning that ol’ chunky amour, and fighting the Locust… I mean the ‘Swarm’ through open deserts, ruined cities and harsh snowscapes, I can assure you that the latest in Microsoft’s lovechild franchise is every bit as good you have been hearing, and perhaps better.

In Gears 5 former protagonist JD has been rotated for his corporal, Kait Diaz, to take the narrative lead, and her inexplicable connection to the Swarm thus becomes the meat of the game’s story.  Who are they really? How are they different from the Locust? What is the key to defeating them, and what is Kate’s role in this quest? These questions form the focus of the Gears 5 plot, and the Coalition have amalgamated the balls-to-the-wall action beautifully with their most serious story telling yet. You can really tell the series has matured it’s narrative chops this time around.

Gears 5 easily features the most expansive environments in this series, so I guess this is where the majority of that colossal, 60GB install file went. The world building is really stellar here, and as the gameplay shifts meticulously from one explosive set piece to the next, you get this feeling that the backdrops are telling a story just as much as the characters’ dialogue.

The environmental design accentuates the genuinely dark moments, such as the scene through an abandoned laboratory where Kait learns about atrocities committed in experiments on children, as well as the big secret behind her migraines and visions. These are contrasted with more whimsical portions where, believe it or not, you actually face off against the Swarm on a theatre’s stage while using acting props as cover.

I also liked how The Coalition seemed willing to experiment with a more controlled pacing in a series not exactly know for taking things easy. Cutscenes are far more dramatic and lengthy, while the use of zoomed-in shots combined with meticulous facial animation really make the characters an even more central part of the game.

Gears 5 is not quite the Unreal Engine 4’s finest hour, but this game is still a sensory blowout. The Coalition has crafted their latest entry in exquisite texture detail and environmental effects, all of which adds up to a classic, ‘just-had-to-stop-and-stare’ entry in this already visually impressive franchise.

This particular engine has had some time to become friends with our PC’s, so I don’t fully understand why the graphics settings have as many options as a Boeing 747’s control panel. At least players willing to tinker a little are guaranteed to push really high resolutions and frame rates.

Most unfortunately, Gears 5 felt like an utter technical mess at times in terms of stability. Now I am well aware that my PC is entering its twilight years, and that my internet subscription leaves much to be desired. However, those finding themselves in my position had better be warned: You might have a hard time playing your game.

My review copy came through the Microsoft store – a platform that has given me endless grief since the moment I first used it. As predicted, the usual bag of issues ensued: Sluggish download time, always online that refused to let me play when my shoddy internet decided it no longer loved me, and the entire install process freezing permanently halfway through. A Steam copy therefore receives my highest recommendation.

However, the worst was that the game had this strange habit of crashing my entire PC, and blaming it on my GPU. This is an utter mystery to me considering I was running the latest drivers without any complaints from other games, and the crashes seemed totally random. I could always tell it was coming since the game would start stuttering worse than someone with an old prostate trying to pee.

Gears 5 is therefore a weird case of when it works, it works well, but otherwise this game literally ground my entire PC to a halt. Naturally I first suspected this to be the cause of the overclocks I had just set on my CPU and GPU, but some searching on the official Gears of War Forums revealed that I was not alone. Definitely something The Coalition and Nvidia will want to address since Steam is filling up fast with red thumbs pointing down.

You have to wonder if Epic Games had realised how future proof the formula underneath the original Gears of War would be. Here we are, about thirteen years later, and playing Gears 5 feels completely identical and just as enjoyable. Overall, what separates Gears 5 and the first entry in this series in terms of gameplay actually amounts to very little.

You can really tell The Coalition have tried to preserve the classic, cover-based shooter mechanics in the way that characters move and engage during firefights, but also in how nearly all of the classic weapons have made a return. Gears 5 is therefore highly conscious of what made its predecessors so memorable, and wants to add more things to the formula rather than rebooting or attempting to make fundamental changes.

The best example of this is all the new functions that have been endowed unto the ever present but rarely seen little robot, Jack. This little mechanical marvel is now a much more central tool in how you can turn any given combat scenario to your advantage. 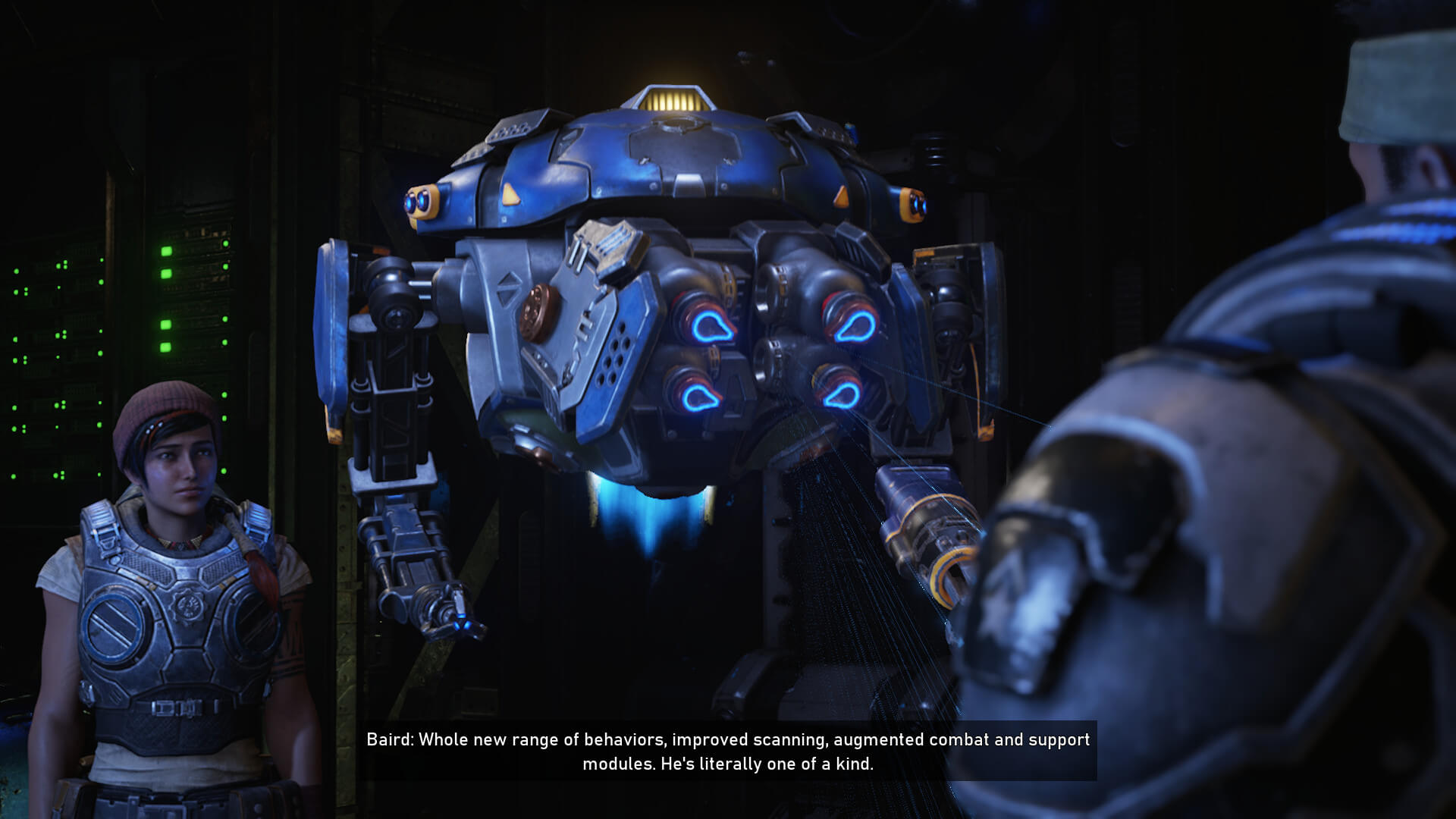 Struggling to nail that headshot? Just ask Jack to zap the enemy, making them stand up and expose their head from cover. Want that Boomshot lying at the other end of the battlefield? No problem, Jack can warp right over. Oh, your comrade is down you say? After collecting enough of Jack’s upgrades scattered all over the world, the robot will happily scoot right into the midst of the firefight to revive your squad member.

Admittedly, I actually forgot about Jack most of the time since the gunplay in Gears 5 does the job just fine. I also questioned why the little robot should be able to give your character stealth abilities to sneak up on enemies. (Give it some thought: Stealth abilities… in a Gears game… it just has no reason for being there.) Nevertheless, it is good to see Jack finally moving beyond just opening doors and add an engaging level of creativity to your onslaught against the swarm.

Another feature worth mentioning is that Gears 5 is the first in this series to feature semi open-world segments, which is another sign of the developers experimenting with new additions to the classic formula. These play out when Kate and Del are roaming around on the landscape with their kite sleigh, and the player can explore certain locations or ruins to collect additional upgrade parts for Jack, or just find rare editions of certain weapons.

Honestly, these moments play like 99% of all third-person, action-adventure games, so there isn’t really much to say. At least the open world segments represent a nice diversion from the linear sequence of gun fights that can make a Gears games feel rather repetitive. Just another small experiment in good narrative pacing that I think will contribute towards more installments down the line.

Gears 5 also really goes out of its way to make the environments feel like part of a strategic advantage against enemies. One of my all-time favourite moments came during a snow level scene, where the horde storms at the player across a frozen lake. This of course gives you the opportunity to shatter the ice right underneath their feet.

This was an awesome sequence where you get to watch some of the most intimidating enemies plunge helplessly into the frigid water and flail about as they freeze solid. Combine this with weapons like the ‘Buzzkill’ (which basically flings around ricocheting circular saw blades) and I couldn’t remember when last I had this much fun in a shooting game.

Gears of War may have completed its journey on the Xbox 360, but I am truly impressed that the series has come back home to the PC. I recall spending my entire summer job’s earnings on a Radeon HD 2600 XT to play the first game on my Windows Vista PC. Once I saw those gorgeous DirectX 10 textures come alive at smooth frame rates, all that soul-crushing work seemed worth it.

Gears of War 4, and now Gears 5, take me back to those days where I could play one of the industry’s most beautiful and action-packed 3rd person shooters on my favourite platform. That being said, I feel obliged to warn those thinking of picking up Gears 5 that they might run into some substantial technical difficulties. Let’s hope The Coalition and Nvidia get cracking with those patches, yes?

Play time: About 13 hours total. For the single player campaign