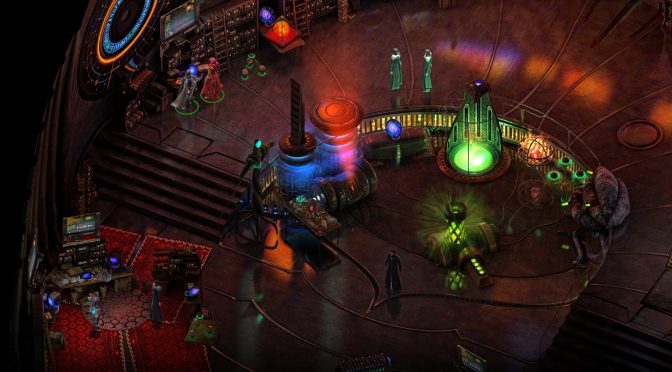 Anarchist automatons, phantasmal prophets, amorphous aliens, noncorporeal entities, mutant magicians, demonic doomsayers and amorous apparitions; things that are, things that could have been, things that exist in different dimensions; cannibalistic cults, ultra planar cemeteries, endless religious wars, bulging biocities that spew forth portals and children that play with gods. Torment: Tides of Numenera introduces one of the wildest, most creative settings in recent memory, filled with insane possibilities and prospects and is one that should be revisited by inXile.

One billion years in the future and after countless of civilizations have risen and fallen, Earth has become a relic-ridden realm of unpredictable chaos. Technology is so evolved that it’s indistinguishable from magic while one man has unlocked the secret of life and creation, hopping from body to body to chase unfathomable knowledge and power. In pure Planescape: Torment style, you play the role of the Anonymous Amnesiac Undying (and Unwilling) Hero, who is trying to put the pieces together, find others of his kind, realize his place in the world, confront his Maker and escape the clutches of an ever-hunting, relentless Beast. Also like Planescape: Torment, you never know what’s just around the next corner. There are no rules here and when the setting is a billion years from now, anything goes. This is utter, crazy, chaotic, unbridled and unpredictable fiction at its finest.

Comparisons with Planescape: Torment, the classic 1999 gem of lyricism are bound to pop up as the ‘spiritual successor’ card was used aggressively in the marketing pitch of inXile’s Kickstarter project back in 2013. Many legendary names were tied to the project like Monte Cook, Chris Avalon, Brian Fargo and Colin McComb; the bar was raised, envelopes were expected to be pushed, expectations were high and the hype was strong. Unfortunately, this enchanting setting, with its gripping narrative and powerful writing is the only strong quality of Torment: Tides of Numenera.

Veterans of the RPG genre (whom Torment: Tides of Numenera supposedly targets), will immediately notice that this is not a solid, robust, fully fledged and polished five million dollar project. After the initial feeling of awe, mainly caused by the evocative powers of well-written descriptions and the spectacular setting, omissions and deficiencies can be glimpsed while playing, things that give the impression of ‘something missing’. Voice-overs are randomly scattered in NPC reactions, there’s a noticeable lack of inventory sorting and filtering options, no NPC portraits or close-ups during dialogues and with this cornucopia of bizarre terms in this extended, fantastic mythology, one would expect some kind of encyclopedia or those amazing explanatory pop-ups that Obsidian used in Tyranny.

As the hours go by, this sense of incompleteness slowly begins to pull you away from TToN’s immersion. The much talked Tide system for example, feels half-implemented in the game, like so many other features of Torment: Tides of Numenera. Judging by your reactions and dialogue options, you are assigned Tide points, depending on your idiosyncrasy. These Tides are unseen energies that bind all things in this world and are based on human emotions and characteristics. Blue is for knowledge seekers and sages, Red is for passionate hedonists, Indigo symbolizes justice and the greater good, Gold stands for empathy and compassion and Silver is linked to the chase for power and fame. Based on the two more dominant Tides, your character is marked as a Blue/Red person, a Silver/Indigo, a True Red character, and so forth. But the exact way that this characterization affects actual gameplay options, is mysterious, if non-existent. In some instances, an interaction will require the use of the inner Tides, but this is not evidently tied to the color and the choices you have made. It’s like the game takes all the time to create your individual profile through constant evaluation for no important reason. So while the foundation for an interesting system was indeed laid, it’s like it was left unfinished, sadly not reaching its full potential. This sentiment summarizes Torment: Tides of Numenera.

The apotheosis of this half-baked impression comes with the choose-your-own-adventure blocks of text that appear plastered on some sketch artwork during flashbacks. This was jaw-dropping at first and one can easily think that it’s some kind of placeholder draft that was forgotten in post-production. If you are a true fan (and especially if you have already participated in the massive crowdfunding project and do not want to admit that maybe you should not have spent 400 dollars to back a nostalgia-capitalizing product) you can find excuses for most of TToN’s faults. But plopping blocks of text and multiple choice menus is inexcusable and unfortunately (for lack of a better word) cheap.

Graphically, Torment: Tides of Numenera takes us back to the old Baldur’s Age technique of marvelous paintings that are meticulously drawn, but are sadly void of life. No effects, no idle background animation, no flair; just still life. Traversing those colorful scenes feels like walking on beautiful but dead wallpapers. Furthermore, there is nothing notable in the level design, no architectural flair or a more cerebral approach; just some basic examination and/or interaction points. Aurally, things are also on the ‘basic’ level, with some areas feeling completely empty of ambient sounds and atmosphere while the music score is somehow limited.

There is no combat in Torment: Tides of Numenera, not in the traditional meaning, and this was planned to be one of the revolutionary features of the game design. Instead, the game utilizes a Crisis mechanism in missions that feel like set-pieces, even though they take place in a turn-based environment. The obvious and most straightforward way to succeed in these encounters is by fighting; but, depending on the context and the circumstances, you can use diplomacy, environment interaction or sneaking tactics to avoid combat altogether. So it’s actually possible to complete the whole game using no violence. This is an interesting point and would indeed be a nice bonus as an added feature, but at times TToN gives the impression that it’s entirely based on this option, ignoring other basic facets of gameplay.

It must be stressed emphatically that these scenarios, albeit multi-layered and meticulously designed are disappointingly sparse. Depending on your playstyle, you should estimate that about 70-80 per cent of the content is spent in dialogue trees, reading. Even if you create a warrior and make choices that lead to battles, you will find only a few combat situations. It’s evident that Torment: Tides of Numenera is not a combat-based game, but a series of dialogue-checks that after you expand the basic Might/Speed/Intelligence pools, are not even that challenging. That means that all elements of the combat system, spells and abilities, items and opponents, are on a somewhat basic level and most of those (including the Numenera, the most important technomagical constructs of lost civilizations that the whole premise is built upon) are completely obsolete, often omittable and rarely utilized.

There are also some technical issues, ranging from minor (extra buttons appearing on item examination menus) to major (an insistent glitch in an escort-like mission kept repeating after three tries, essentially making the optional quest impossible to complete). After 25 to 30 hours (depending almost entirely on your reading speed), Torment: Tides of Numenera comes to an awkward ending that clumsily asks you to chose one of the possible endings. Additional playthroughs are possible, but only the most dedicated of fans are expected to revisit. Despite the shortcomings and its quirky, uneven nature however, it’s very easy to fall in love with TToN’s setting and its enthralling penmanship. In fact, those elements are what will probably draw you back in the game, as you wish to experience more of this world and its endless possibilities.

InXile has cut out a great deal of content from the game: planned companions and areas disappeared, a complex focus system that adds flavor and character to customization has been damped down severely, a crafting system has been removed and some localization options have been cancelled. The final release of Torment; Tides of Numenera has been edited severely, leaving out large chunks of organic elements and features. This has always been a part of any iterative development cycle: goals, circumstances and conditions change. In any drawing table, be it for a novel, a movie, a song, a game, you cut things out. Ordinarily, that would not be a problem, but the content missing is noteworthy and, more importantly, tied to many crowdfunding goals. This has created some strong negative feedback and is opening that bad can of worms that no one likes to talk about, crowdfunding and its pitfalls: consumers that feel enabled (or deceived) and creators that have their artistic leeway stifled (or use it to excuse bad resource management).

We will never know what has truly happened but it’s sad to see a very passionate community of gamers being divided and polarized. Among the drama, two factions have formed: skeptics who think that have been somehow cheated and look for shadowy publisher dealings, secret fundings of other projects and evil console conspiracies and romantics who try to look at the whole picture and give inXile the benefit of the doubt. Maybe expectations were set too high, maybe there’s a lesson for all of us in this bizarre tale. Certainly, it’s another red flag for the whole mechanism of crowdfunding, which has to be reevaluated by all parties.

Maybe we should count our blessings and be happy that inXile has at least stayed true to the basics of Planescape: Torment, as most fundamentals remain thankfully unchanged. One has only to visit recent chapters in similarly classic RPG families like Dungeon Siege, Fallout and Sacred to be reminded that things can go really bad when trying to keep up with modern trends in an effort to appeal to a broader target group. Definitely a niche game, Torment: Tides of Numenera is under no circumstances easy to recommend to an impatient low/med level gamer or anyone that tires easily when confronted with large amounts of text. Hardcore veterans of nostalgia are advised to wear their best rose-tinted glasses and try not to look at the sad shortcomings of a game that could have been a masterpiece.