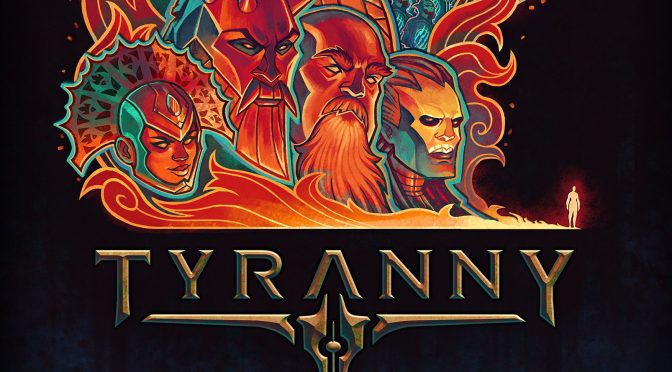 After a 400-year war, Kyros the Overlord has almost united the realm of Terratus under his iron fist. But is (s)he a truly nefarious god-like entity? When is a conqueror evil? Aren’t most civilized countries on our planet soaked in the blood of their original inhabitants? Aren’t massacring megalomaniacs hailed as honorable heroes in famous sagas and History classes alike? Can we tell the difference between a smooth-talking demagogue and a merciless but law-abiding leader?

Obsidian’s Tyranny, hailed as a spiritual sequel to Pillars of Eternity, is a thought-provoking masterpiece that daringly asks those impossible questions. There have been many games where the main protagonist was evil, but it has always been superficial, humorous and lighthearted. Tyranny’s theme is adult and dark in an unprecedented, profound way and pulls no punches:  you can actually feel bad with some of the choices you make… and immediately after that you justify your actions so they actually make sense. And it’s THEN that you genuinely feel troubled, when self-realization hits you. Tyranny has the capacity to take you into some dark places of the psyche; if you intend to go into Tyranny wishing to change things up, hoping that there is a way to turn the evil protagonist into an unwilling hero, you will be disappointed. Moreover, if you traditionally play only good-aligned characters in RPGs, you will be challenged. The best you can do is offer merciful murders and diplomatic devilry.

The will of Kyros is enforced by Edicts and Archons. Edicts are country-wide massive curses that plague the land for aeons while Archons are Kyros’s immortal champions, each with a very specific portfolio (Justice, War, Secrets, etc). Two of those Archons were dispatched by the Overlord to the Tiers, a small patch of land that remains unconquered: Graven Ashe, the Archon of War with his army of law-abiding but ruthless Disfavored; and The Voices of Nerat, a chaotic, scheming cacophony of collected personalities who leads the Scarlet Chorus, a maniacal horde of bloodthirsty savages. Predictably enough, the two conquerors can’t cooperate to quell the local resistance so you are sent by Turon, the Archon of Justice, to deliver a very special Edict to the rival armies: “if the two Archons fail to conquer the Tiers in eight days, everyone in the valley dies, including Archons, armies and locals”. As a Fatebinder and high servant of the Archon of Justice, you are essentially an autonomous triptych of judge, jury and executioner. In other words, your will is law and you have the power to shape the events unfolding: Tyranny will test your morality and make you reevaluate some of your principles, granting you with almost unlimited power in the process.

Tyranny plays much like Pillars of Eternity: battles follow a pausable real-time system as you issue orders to your four characters (from a sadly limited pool of seven) and utilize skills from different trees, artifacts, reputation rewards, even spectacular combos with your main character. What’s interesting is that all heroes follow a skill-based system, not a class-based one. All level-ups are also based on skill usage: the more you employ your skills, the more they level up (even if they are secondary ones like Athletics or Subterfuge that are used in dialogues or environment interaction). And when skills level up, your generic level goes up as well. Also of note are two other mechanisms that differentiate Tyranny from PoE: a quite flexible, albeit underutilized magic system where you create your own spells through the combination of arcane sigils, as well as a very robust reputation scheme that unlocks a multitude of active/passive skills, according to your dealings with different factions, archons and companions. There is again an attempt of a base-building support mechanism like PoE’s, this time tied organically to the main plot, as you unlock five spires of power that hold the secrets of the Tiers. You can hire henchmen here, trainers and vendors, artificers and alchemists in a system that works decently enough but feels detached from the rest of the game, to the point of being omittable (at least in low/medium difficulty settings).

Tyranny follows PoE visually as well. All areas are beautiful, detailed hand-drawn paintings but sadly not very lively and lacking in interaction, while all character models are in the low/med polygon-count spectrum. Obsidian has again chosen Unity for their game, although this time they have ironed out technical issues and inadequacies (except a problem that dramatically affects loading time in some instances). Aurally, on top of the passionate voice acting, Obsidian delivers a magnificent music score with a little help from Justin Bell, the brilliant composer of PoE’s haunting, melancholic opening theme à la Poledouris. This time, Bell opens Tyranny in a heart achingly slow drag, with relentless blasts of lamenting horns that cry mourningly of dread, despair and defeat.

Tyranny’s similarities with PoE and other fantasy RPGs end here: contrary to the majority of the games in this genre, Terratus and the untapped Bronze Age setting offer more anthropocentric hierarchies. Archons and Edicts aside, this is not a high fantasy setting and most of the time you will be fighting human opponents, not fantastical beasts. Dragons and dwarves, elves and fairies have no place in this cursed realm; Terratus is not a heroic kingdom of gallant knights, it’s a despair-soaked realm governed by unchallengeable sorcerer kings of immense power that simply can’t be toppled (distantly reminiscent of the ill-fated Dark Sun cosmos).

Although Tyranny’s unique lore feels more approachable than PoE’s, this is not a game that you can enjoy in small chunks of time. The talented wordsmiths at Obsidian have penned some wonderful descriptions and dialogues and you must be prepared to do some heavy reading (especially during the deep dialogue trees of your companions). Tyranny’s text is evocative, engrossing and extensive; an estimated word count sits comfortably at the 600.000 mark. For reference, Planescape’s word count was 1.052.000, while all seven books of the Harry Potter series were also around a million words in total. Thankfully, some terms and phrases are accompanied by handy, color-coded pop-ups. These provide short biographies of important NPCs, as well as reminders of the choices you made through the initial Conquest set-up when certain characters recognize you and react accordingly. It should also be noted that, as you shape alliances and declare wars, some quests and areas are organically blocked out. That means that despite a medium duration (20-24 hours for a complete walkthrough), you can easily play Tyranny again with a different character specialization, just to make different decisions and experience more of the game’s content.

Despite its unique charm and character, Tyranny is not without shortcomings. It’s quite easy to make a wish list of things that could have been: more companions or the ability to create tailor-made heroes, a better balanced loot system that scales more fluidly, more optional quests and errands, a more lively environment with interaction, some more unique combat encounters or set-pieces (battles can be a bit repetitive) and, above all, a less abrupt unsatisfying finale following a rushed final Act (admittedly, Tyranny’s gravest error). I would really hate to have to buy a DLC in a few months, just to see how this story ends.

Tyranny is undoubtedly this year’s triumph for hardcore RPG enthusiasts. In a world of casual, superficial games, of hollow gimmicks and marketing novelties, Obsidian’s latest RPG is a text-heavy isometric masterpiece that stands apart with its thought-provoking narrative. Obsidian might have found the perfect companion in Paradox Entertainment and we can only hope for the best, as long as they both treat this niche community with respect.