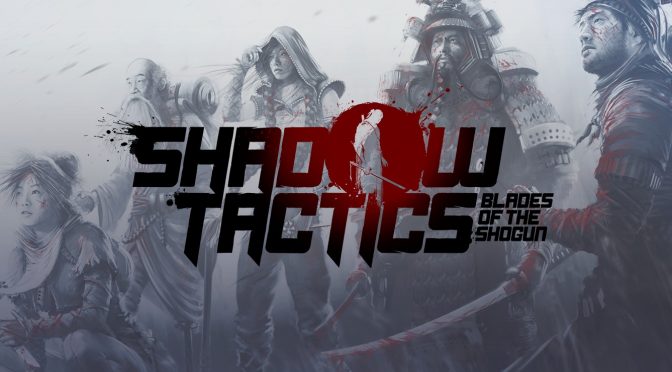 Once upon a time, someone coined the phrase ‘Oblivion with Guns’ for Fallout 3 and some of you might even remember the ‘Orcs in Space’ label that was initially used for StarCraft. With Shadow Tactics: Blades of the Shogun, a lot of ‘Desperados in Japan’ is being thrown around. This is not a good thing. 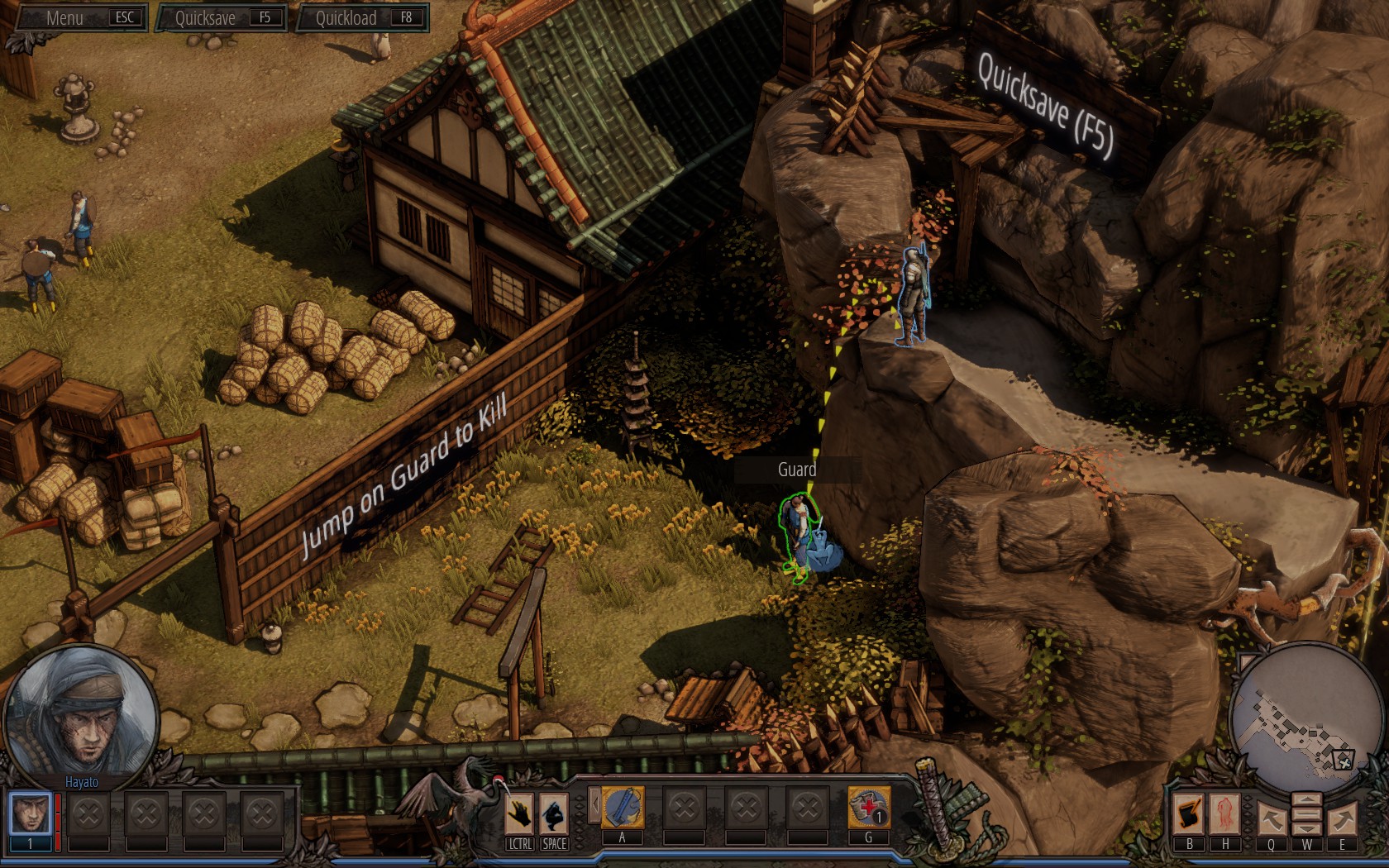 For some people, it’s easy to relate things with each other- it helps them understand better something new. However, these examples carry with them a negative connotation. They tend to imply that this new game is somehow derivative of the old one, that the developer is a lazy, non-creative freeloader and just decided to capitalize another developer’s success. So while it’s understandable that drawing light comparisons might facilitate some humorous banter, it’s often a tasteless thing to do. 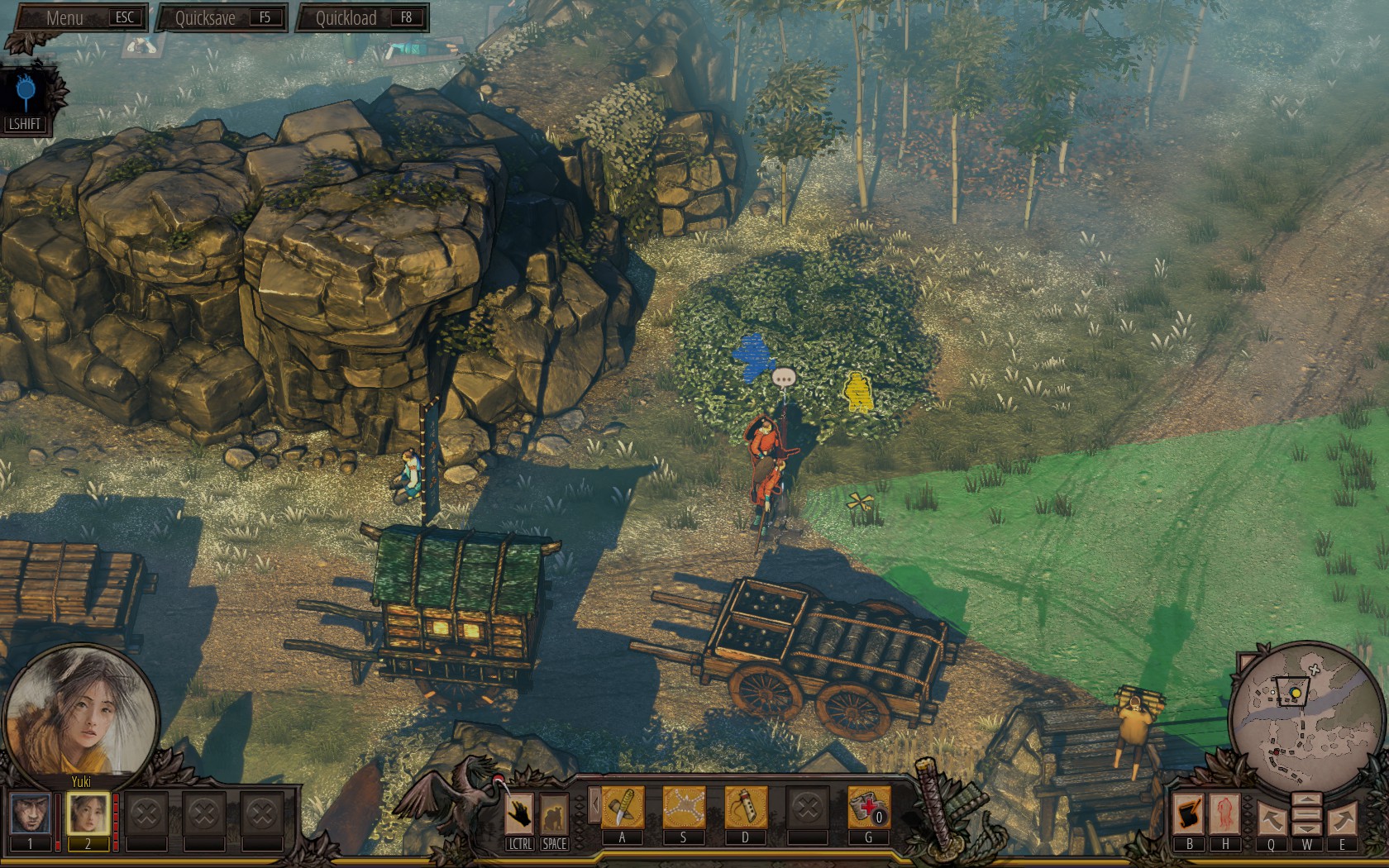 To be honest, up to a point, this superficial comparison makes sense; after all, both Desperados and Shadow Tactics: Blades of the Shogun are isometric, team-based games where you have to utilize various character abilities to sneak by (or silently assassinate) your opponents, getting from point A to point B. Moreover,  Shadow Tactics: Blades of the Shogun does not use the ‘stealth’ characterization lightly, as an added possible feature, like Dishonor and Hitman. You can’t just say, “screw this area, I’m tired of sneaking around and just for this once, I’m gonna storm this, weapons drawn and kill everyone”. 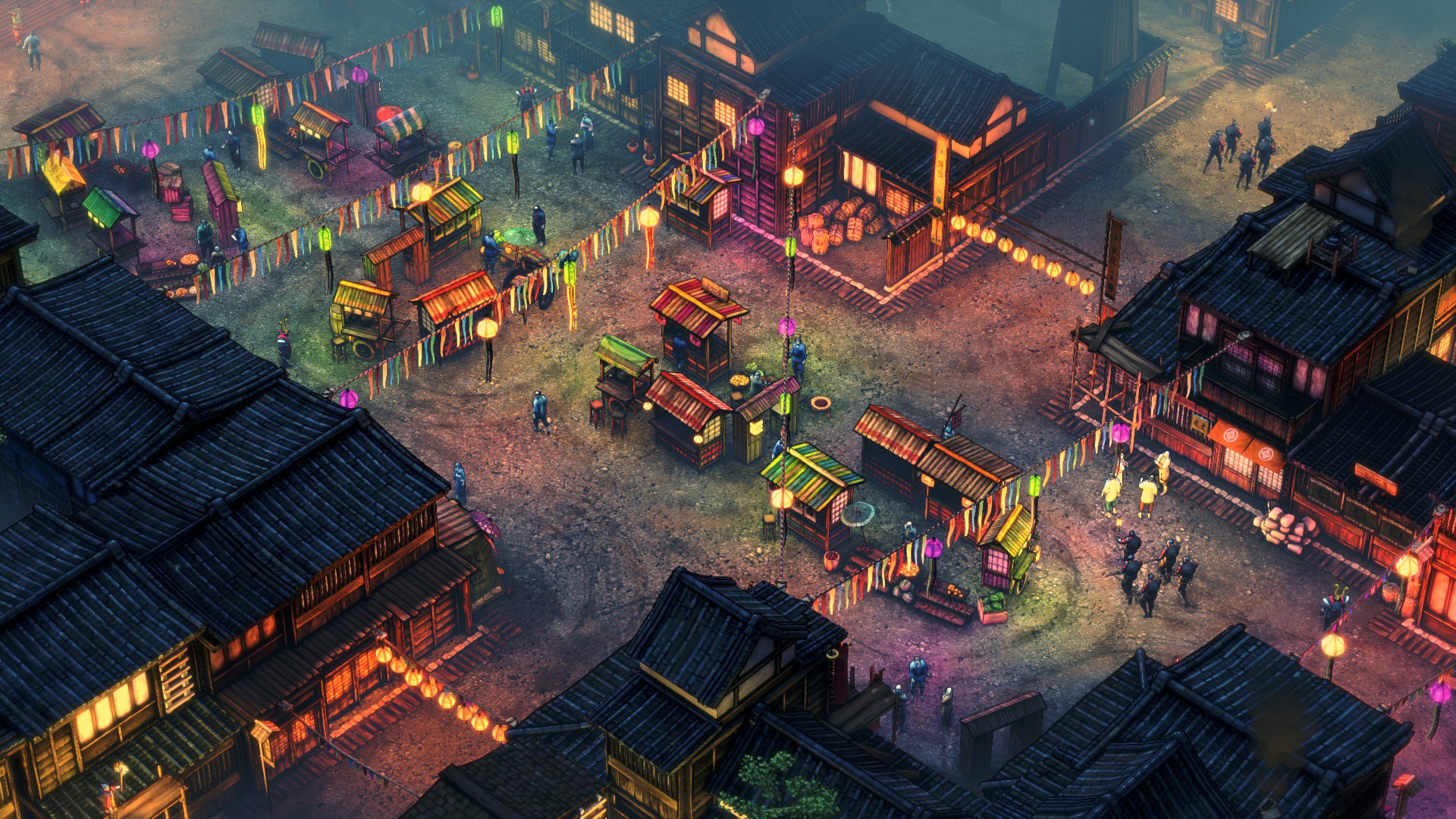 As you follow the story of Mugen, the noble Samurai of the Edo period who is tasked by the venerable Shogun to track down a nefarious warlord, you will gradually form a group that relies on methodical strategies of distraction to complete a series of dangerous tasks. Your five heroes share some basic abilities and all of them have some sort of distracting device to lure enemies away. However, each one has a very distinct set of skills: Hayato is the standard, shuriken-wielding silent ninja, Yuki is an agile young thief that lures her victims into traps, Mugen is an armored tank that prefers destruction to distraction (apologies), Aiko is a master of disguise that can easily walk alongside most foes unnoticed and Takuma is an elderly sniper, extremely useful for taking out enemies from a distance with his rifle and grenade. It’s a well-balanced, wild bunch of heroes that will grow on you– not a mere squad of nameless stereotypes. 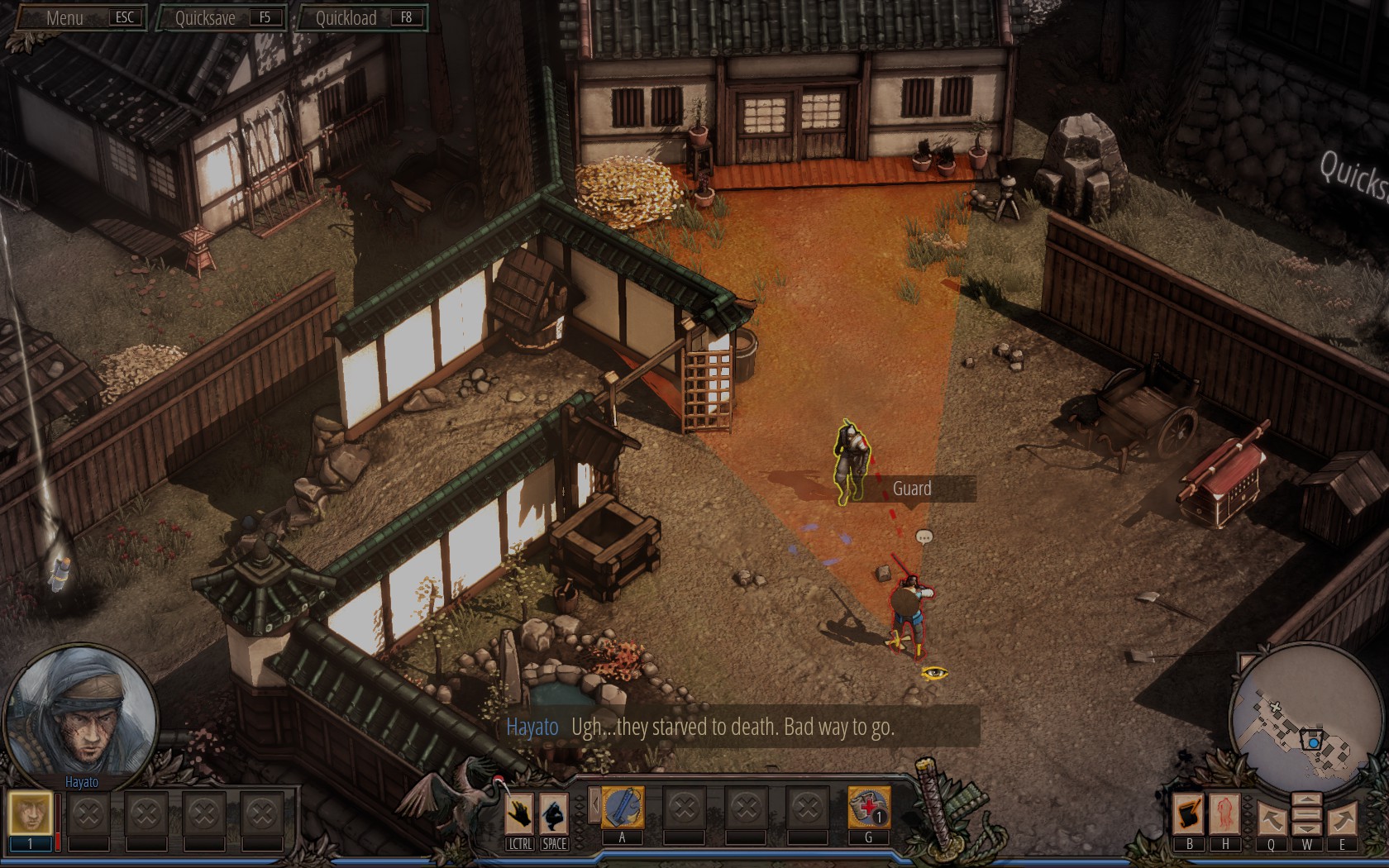 Moreover, Shadow Tactics: Blades of the Shogun uses level design in a fluid and dynamic way, to keep things fresh. The things you did in one level, are almost guaranteed to fail in the next: topography and architecture of the map change, opponents and their AI routines diverge and, most importantly, the roster of available heroes shifts, from one level to the next. There’s also a noticeable verticality in each map and you will have to manipulate hooks, rooftops, cliffs and vines to shift levels, as you work your way to each map’s objective. You will conceal bodies of dead foes, climb walls and hide in bushes; you will study patrol routes, exploit enemy weaknesses and use the environment of these detailed maps to complete your mission. But mostly, you will die and reload. 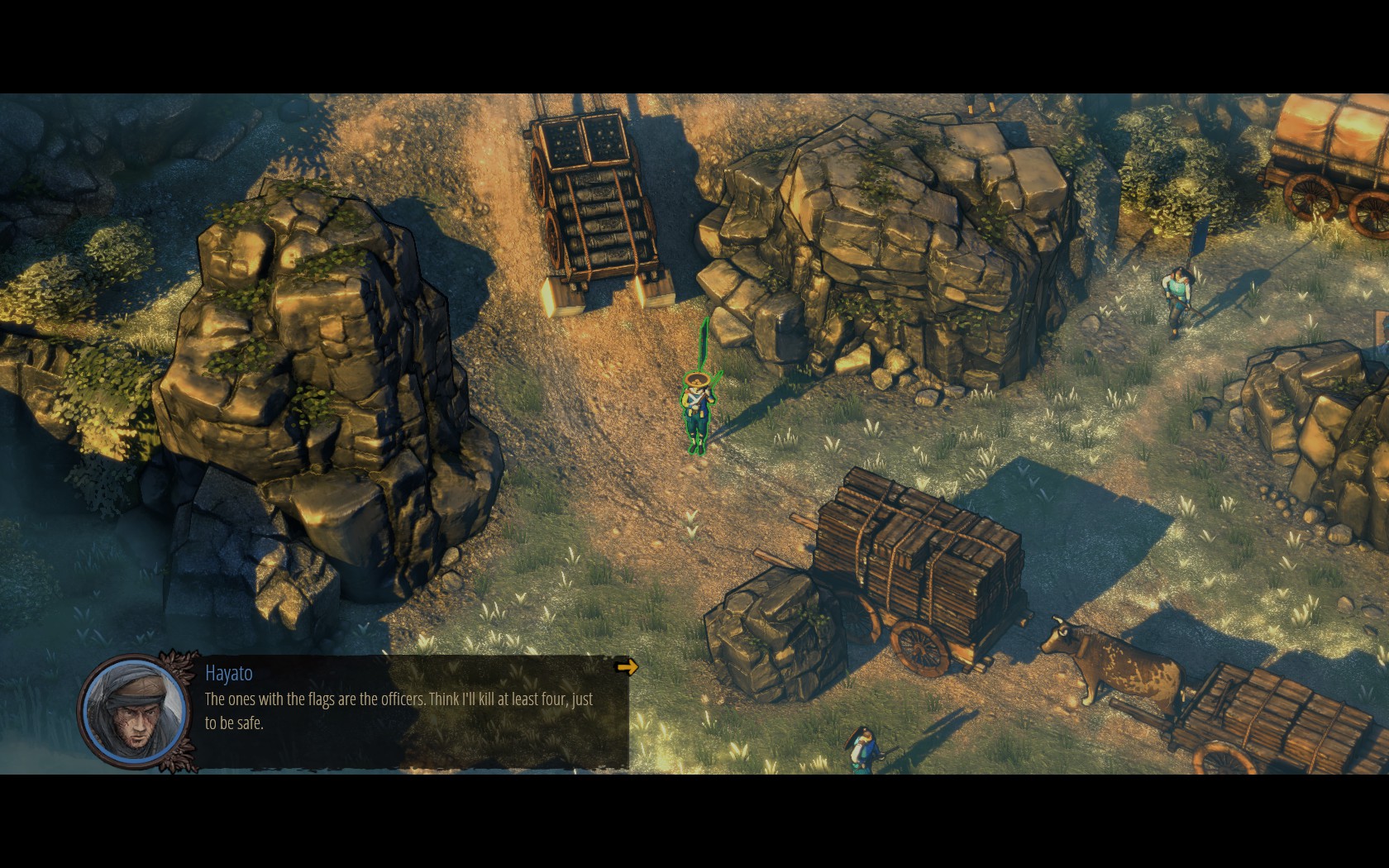 When there is an on-screen, large, flashing indicator that reminds the player that the last Save Game was (30, 40, 50…) seconds ago, you just know that Shadow Tactics: Blades of the Shogun is going to be brutal and that you are going to die a lot- as per today’s game design trends. Simply put, if that trick you used on a guard fails and you get noticed, you just might as well hit the Quick Load key. As a matter of fact, you will come to a point where the Quick Save/Load keys (traditionally, F5/F8), are the keys you use the most. You might get away with getting noticed once in the easiest setting (the one that does not award badges for in-game achievements, unfortunately to completionists), but if you get caught by a guard on the normal difficulty setting, chances are that will get swarmed by foes. The game is designed this way; do not go into it, thinking that you can break or outsmart it. 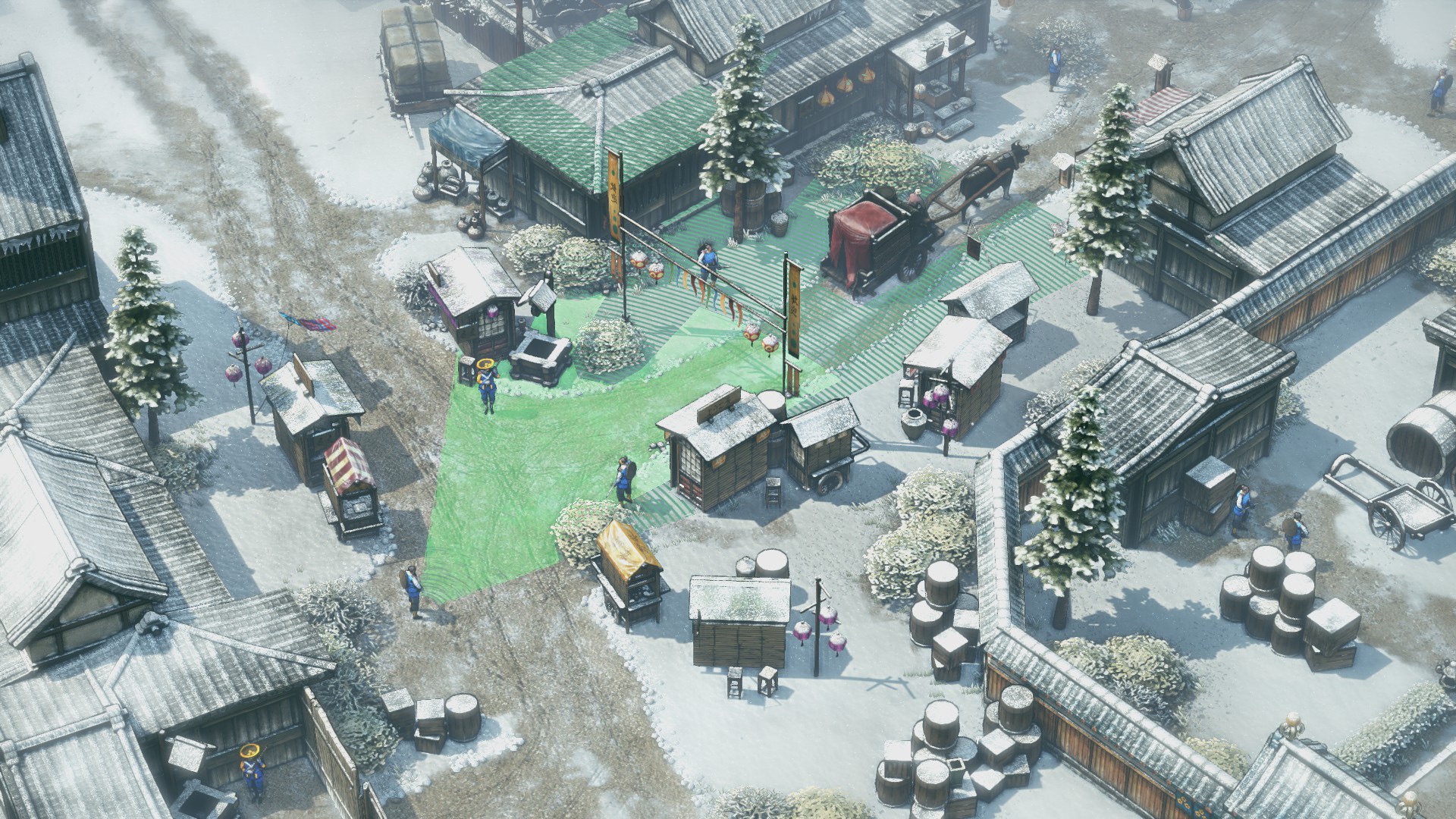 There’s a steep learning curve and as the maps go by, you’ll have to orchestrate your heroes’ choreography quickly and efficiently- often at the same time. There’s a Shadow Mode that enables pre-issuing orders to be executed simultaneously, but it’s unfortunately a rather clunky mechanic. If you factor in the demand to rotate the camera so you can give clear commands behind a building or a tree, there are times that you wish you had more fingers or a pause command. 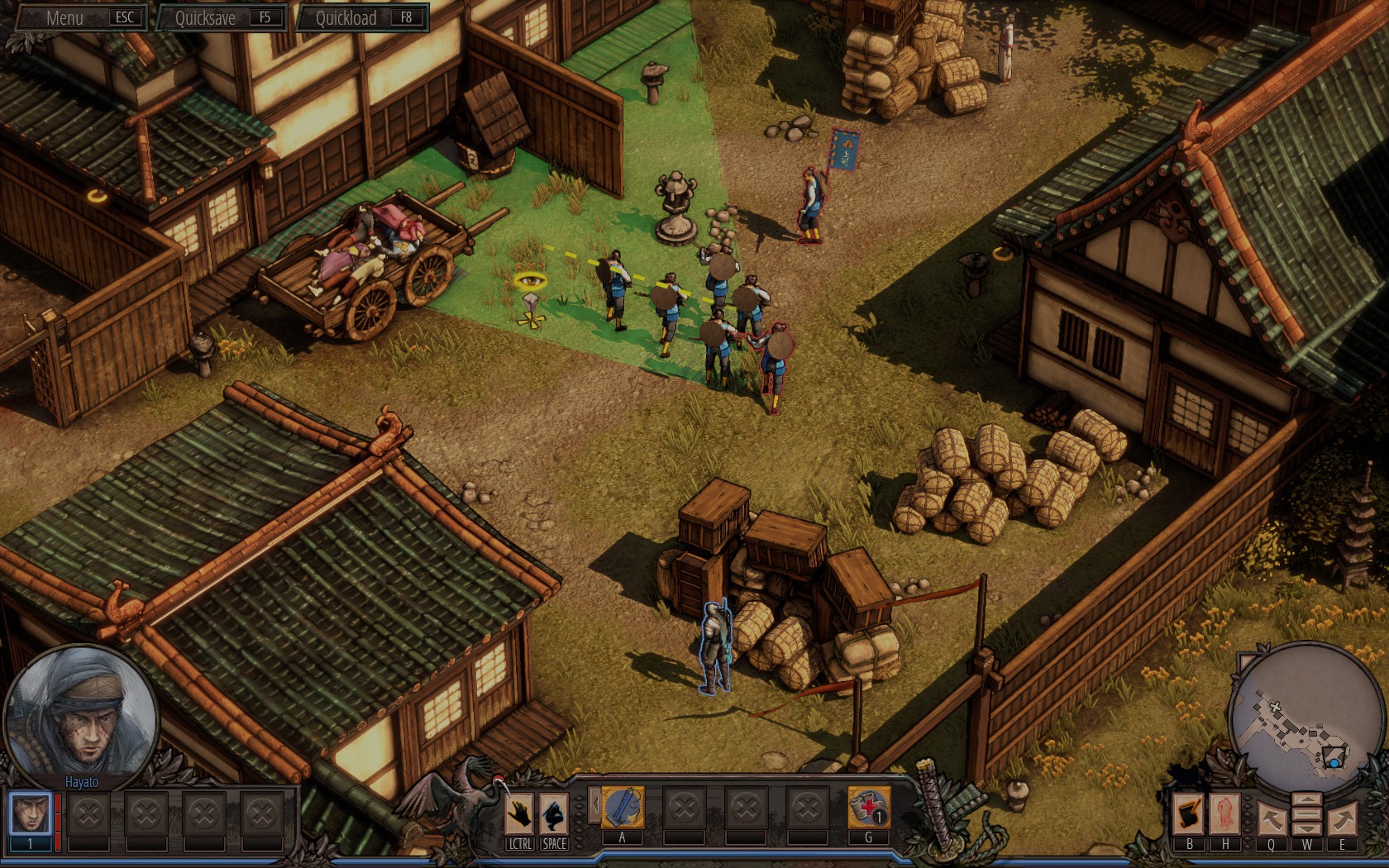 Newcomers to the genre: a disclaimer.  Shadow Tactics: Blades of the Shogun is not an unjust, hostile game; quite the opposite. It’s filled with visual aids, tooltips and helpful tutorials to smooth you in the whole ‘sneak-or-get-killed’ mindset. But it remains a niche-game, a very demanding, puzzle game that requires contemplation and strategy, methodical approaches and well thought-of plans. It can be rewarding to see those plans working out in the end but there are definitely moments of frustration and continuous F8 bashing. You have been warned. 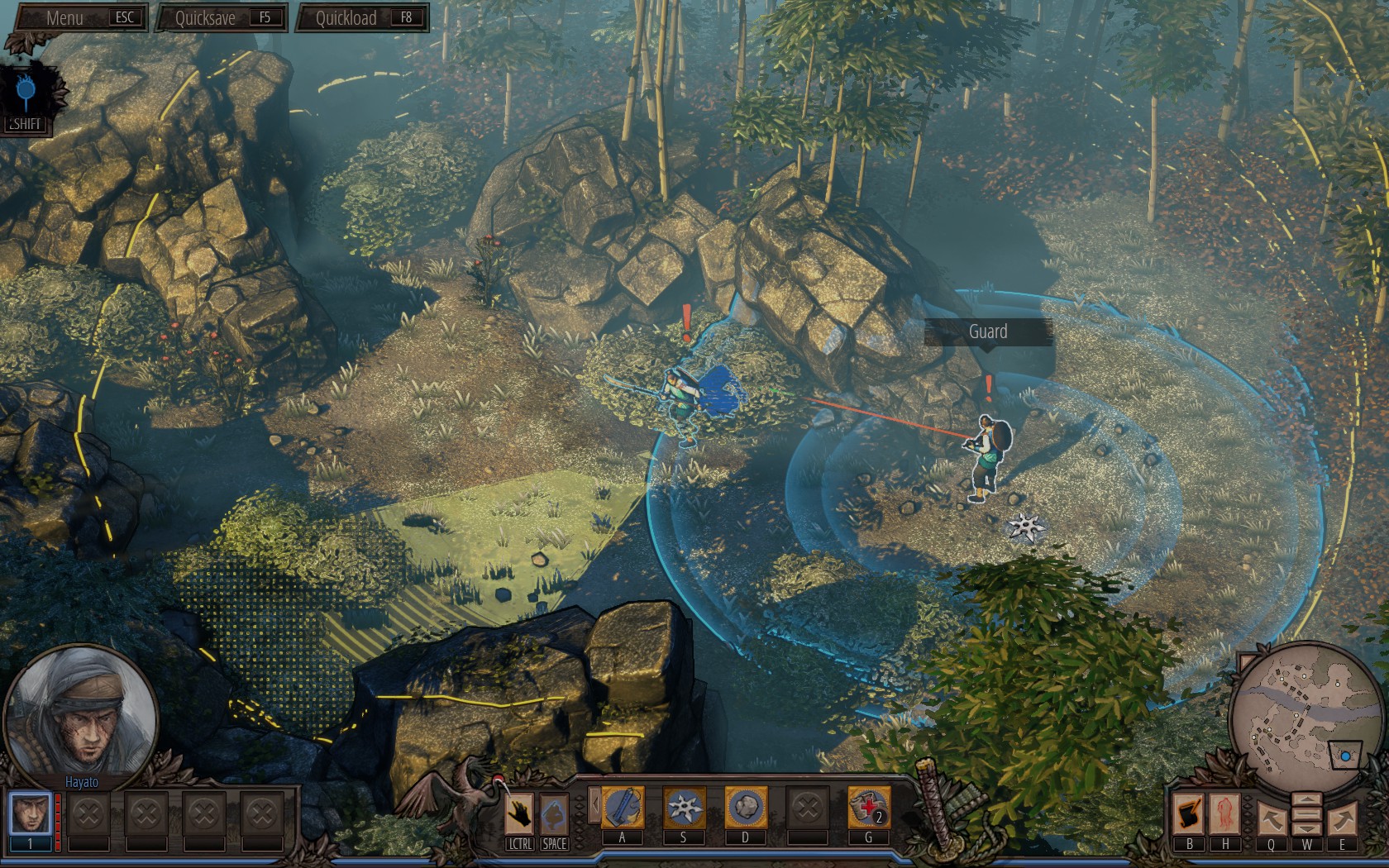 Despite being a thoroughly frustrating game at times, Shadow Tactics: Blades of the Shogun is such a charming gem, that you’ll find yourself drawn to it, again and again. Adorable aesthetics and artwork, solid voice acting and engaging storytelling, characters that grow on you and remarkable attention to detail and intricate touches of character. For example, there’s an option to use Japanese voice overs- a brilliant (and bold) decision that immediately elevates the experience into something original, fresh and genuine. 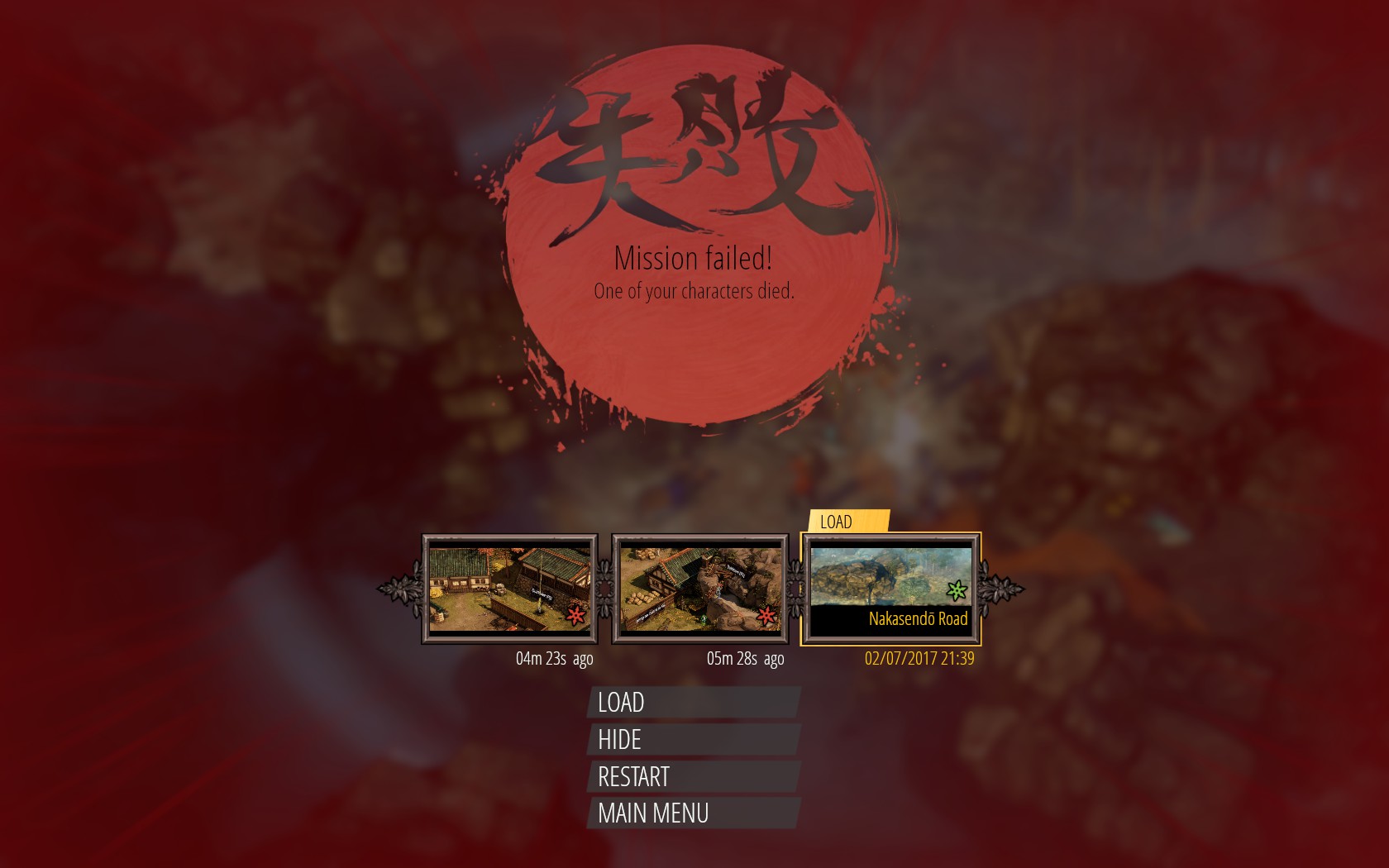 Shadow Tactics: Blades of the Shogun is a very beautiful, charming game that will win you over with character, marvelous artwork and music, refined mechanics and attention to detail. And that’s why it’s unfair to call it ‘Desperados in Japan‘: overall, it’s a richer experience. Developer Mimimi Productions has delivered the new best representative of this sub-genre and additionally deserves a kind mention (despite them not providing us with a review copy when asked) for the public demo of the game where you can play the first level. You can find this demo in both Steam and GOG. We applaud this and feel strongly that more publishers should follow this example. Bring Demos Back.