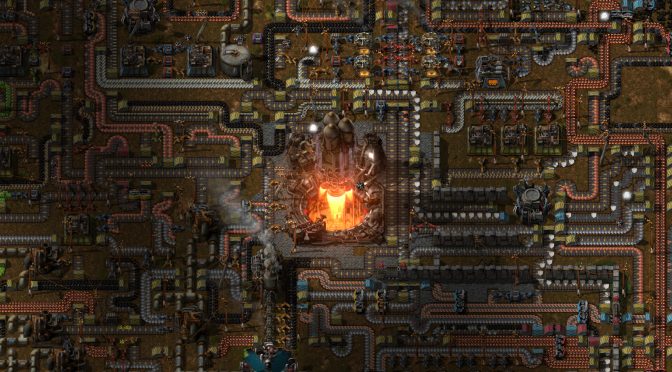 Now before we get started I should fully disclose that Factorio is not for the faint of heart. When I first got my key  from the game’s developers, I told myself that I had to launch a rocket before I could ever write this review. Little did I know that to launch a rocket was a MASSIVE undertaking that took me roughly 40 hours to complete. With that being said, let’s dig in (no pun intended).

There isn’t much to say about this one. While there is a Campaign mode it is more designed to teach you how to play the game rather than provide you with a back story. What you do know is you have crash landed on an Alien planet with one goal, to launch a rocket with a satellite on it to explore space. 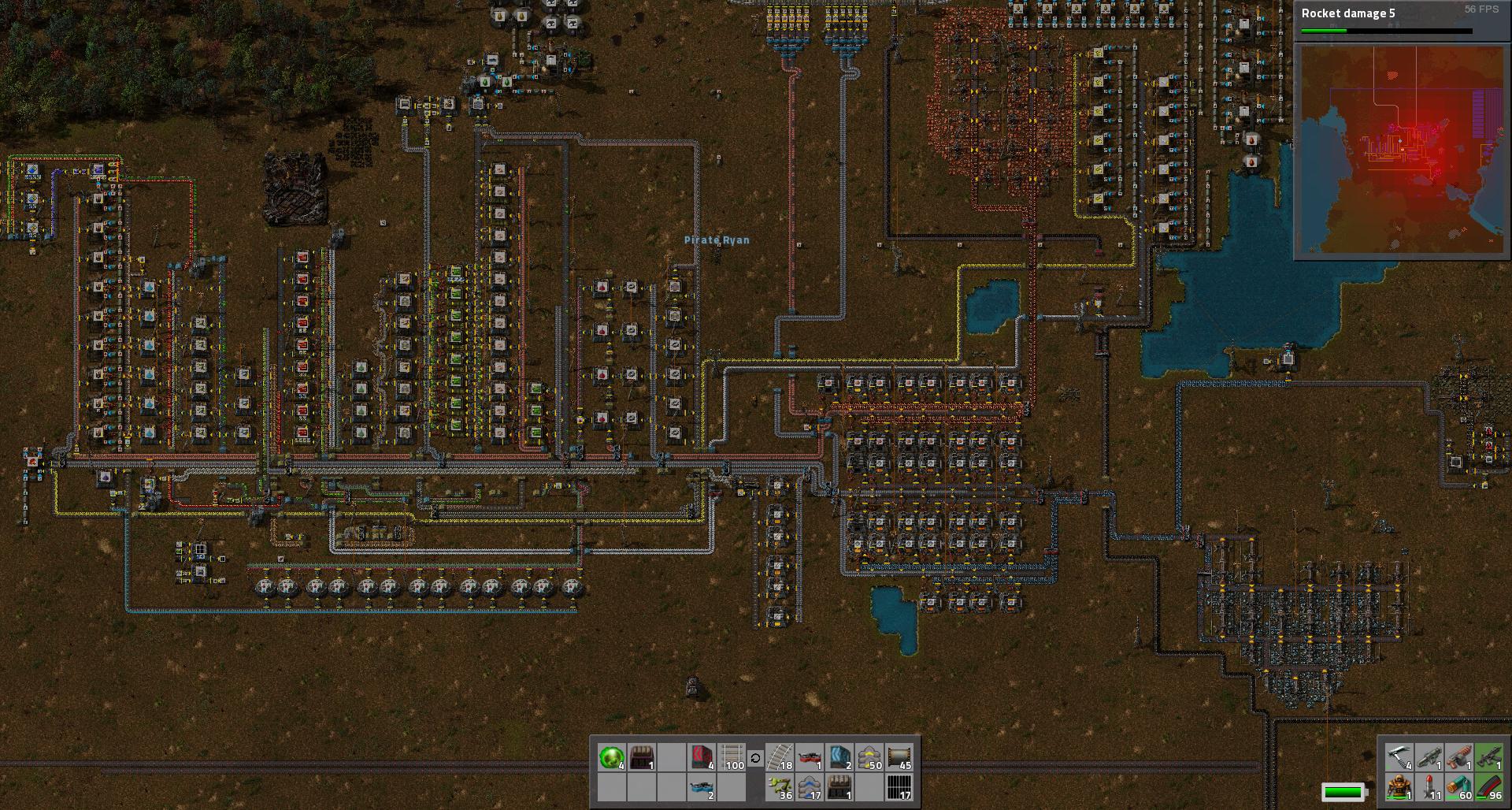 Factorio like many other games requires you to gather resources to craft other items, but with a strong focus on automation right from the start. While there are 3 game modes to play I spent most of my time in freeplay as the Campaign is fairly short and had no interest in playing in sandbox mode which is identical to freeplay only with godmode enabled. In freeplay you can choose a set of parameters that will then generate you a map that can have finite borders or can be infinitely expansive. This offers a wide variety of scenarios that can tweaked to add some extra difficulty and planning. 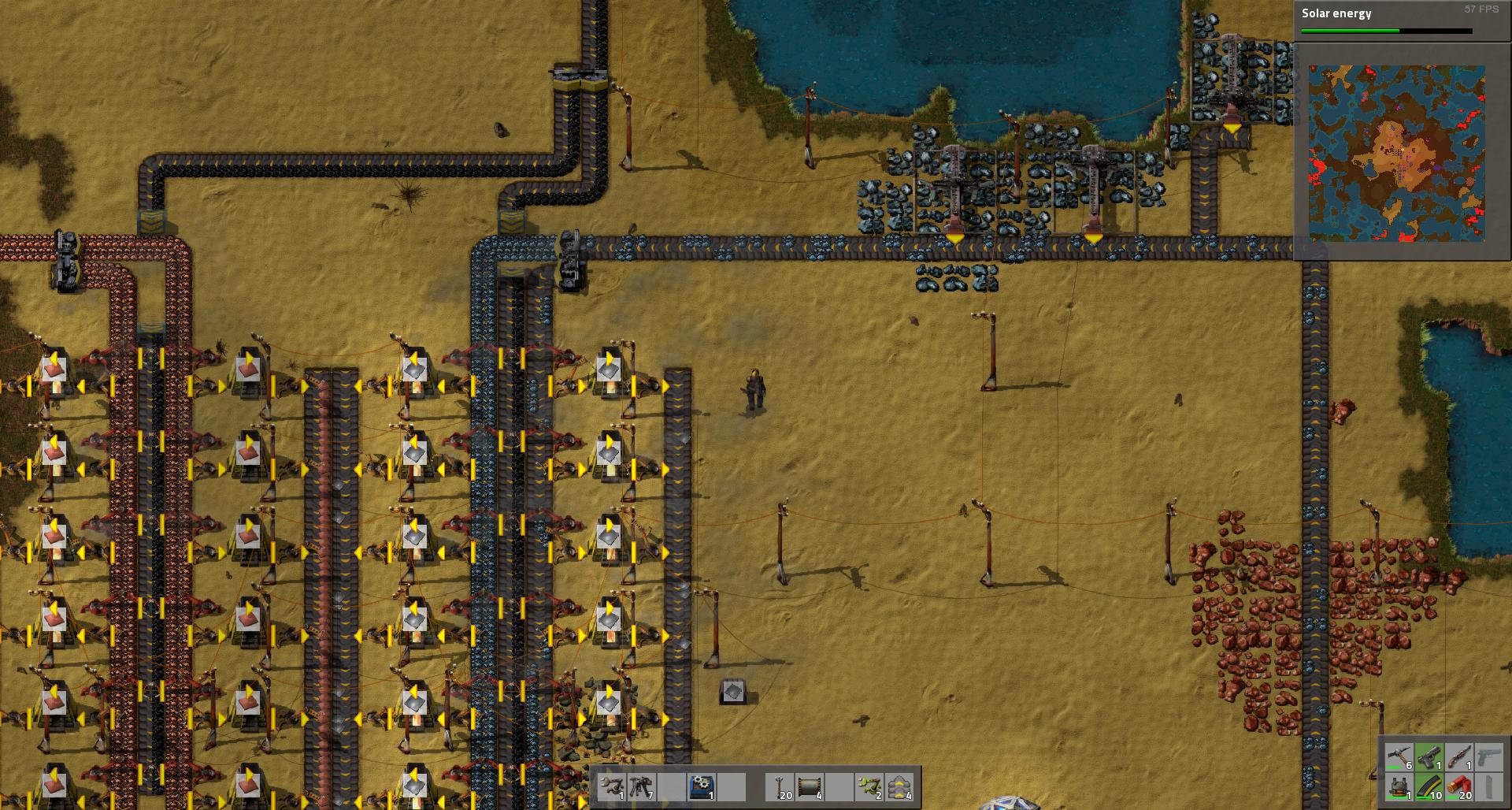 Seriously, this in itself warranted its own section. If you don’t plan out your build from the very beginning you will find yourself rebuilding you base over and over and OVER again, trust me. If you choose to throw automation to the wind and move everything by hand, you will never build a rocket in a timely manner, or possibly even at all. There are many ways to automate your production from moving conveyors, to trains, to flying robots. Everyone will start with the simple burner arm and the slowest conveyor eventually working their way up until you smart robots that move resources from one side of your base to the other. I can not even begin to describe to its fullest how satisfying it is to not have to lift a finger and just witness the fruits of your labor. 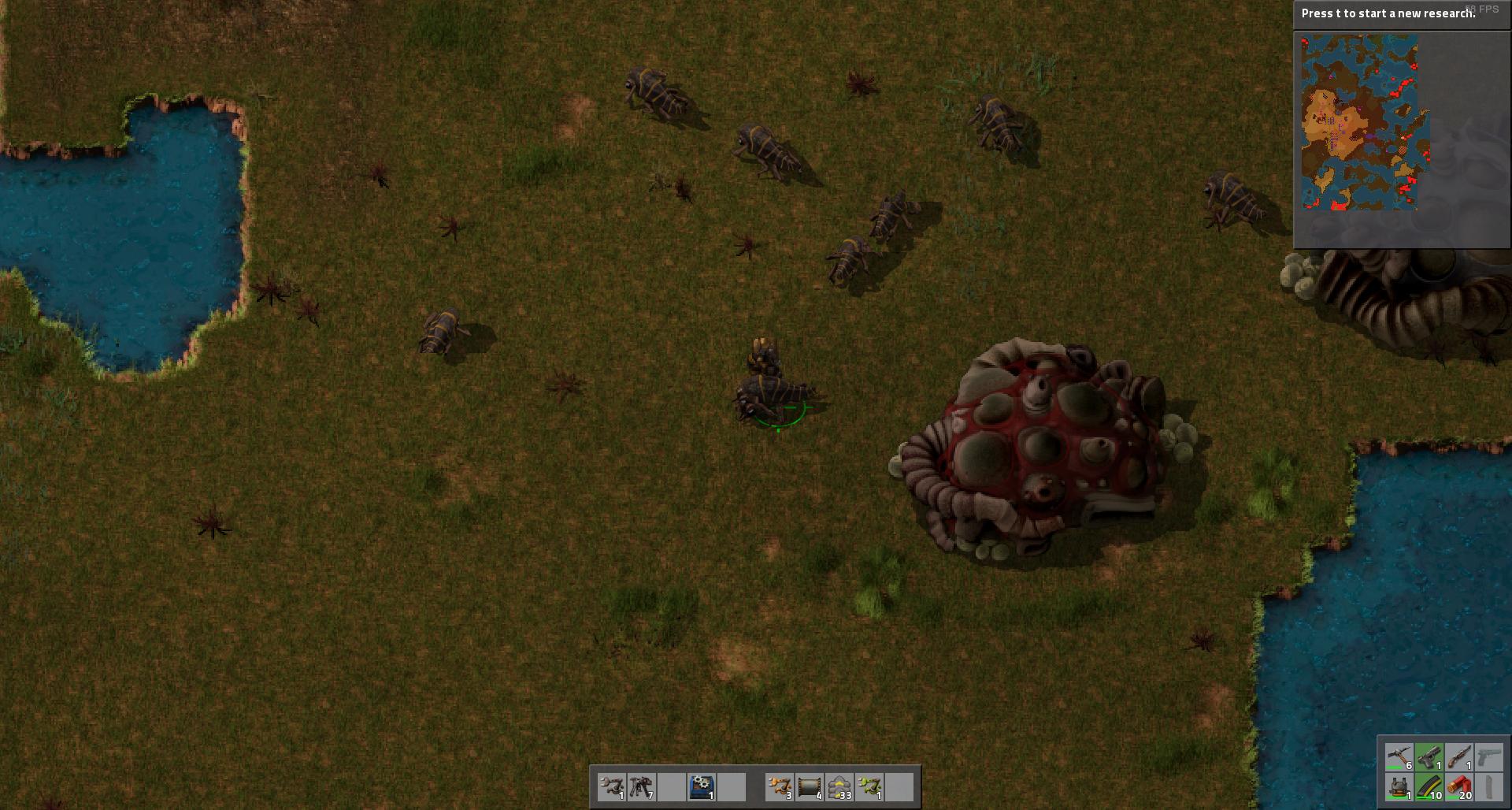 You will spend as much time defending your base as you will building it and the local wildlife is brutal. There are 3 types of enemies: Worms, Biters, and Spitters. 2 of these 3 enemies have 4 stages of evolution that progress as the player progresses and the pollution spreads (did I mention there is even pollution in this game?). The worms only have 3 stages of evolution, but that does not make them pushovers under any circumstance. If you as the player do not set up some form of automated defense system, these creatures will be a consistent pain in your side, or unless you play on Peaceful. 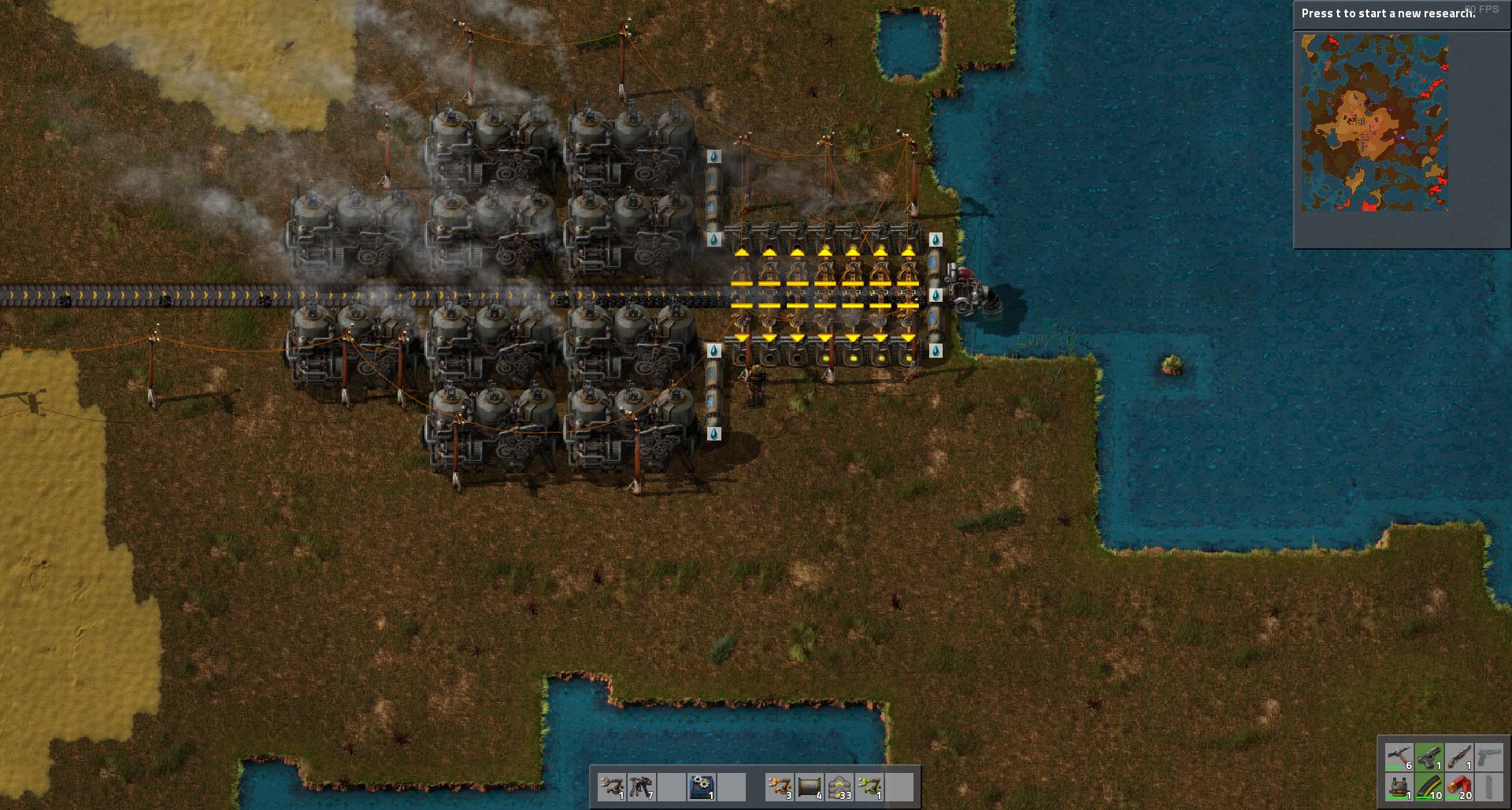 Honestly this happens to be the most underwhelming aspect of Factorio, there is nothing bad about how it looks, but it definitely makes no strides to set itself apart from other titles. Myself and many others have agreed that the textures are pretty reminiscent of Brood War, so it may actually appeal to those of you who are fans of classic Starcraft.

I absolutely love the sound design in Factorio, the ambient music is appropriate for the game’s overall atmosphere and the sound effects of all the machines in operation makes for a soothing white noise that makes you feel at ease despite the hostile world around you.

As usual the test platforms include my desktop:

Factorio ran like a champ on anything I threw at it, It ran so well on my weaker laptop hardware I even contemplated trying to run it on my 10+ years old potato PC, but Windows XP was not cooperating so I’ll have to reinstall and use that in future benchmarks in order to show how well games scale across ranges of hardware. 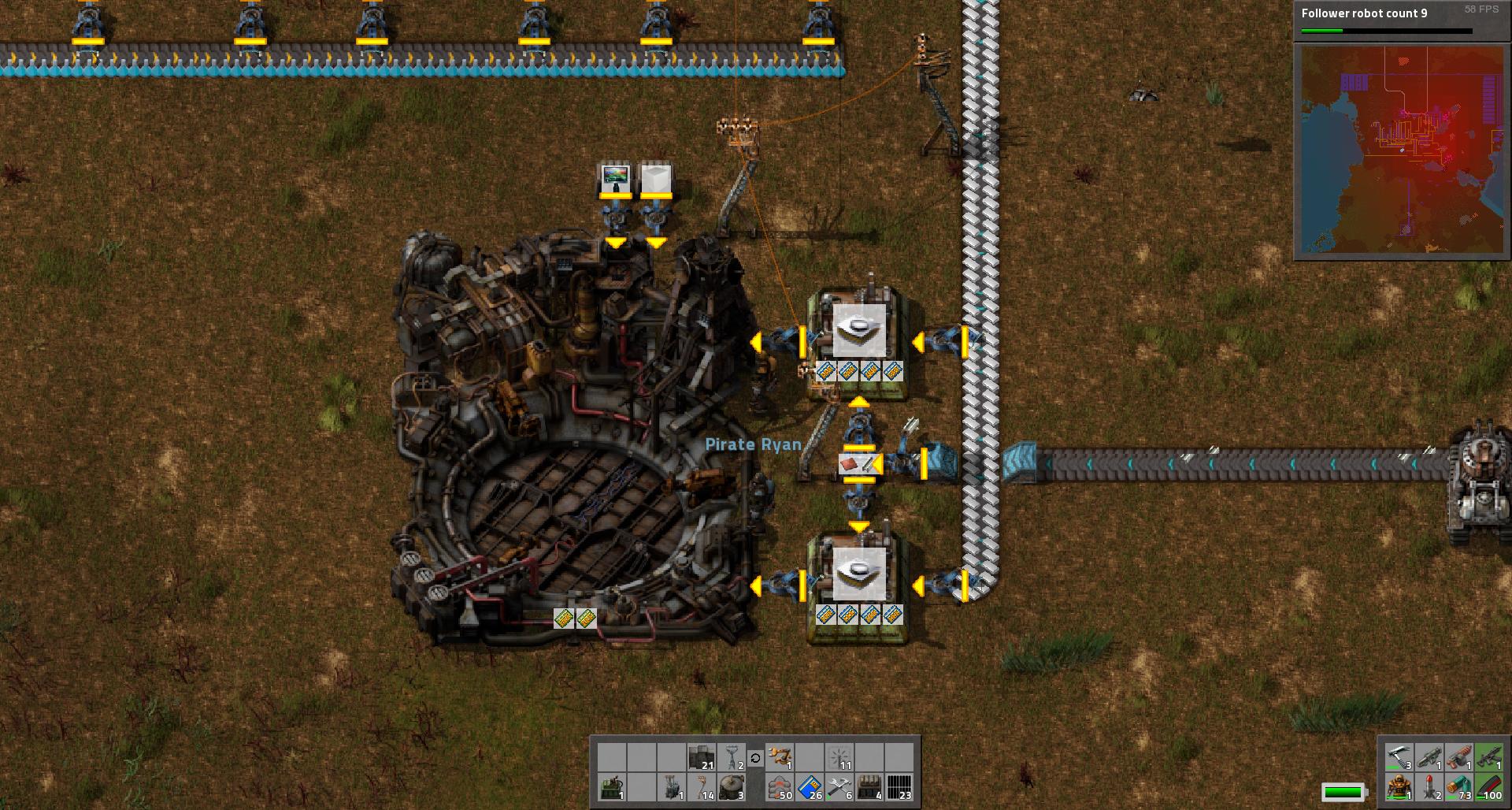 90% of what I did in Factorio was on a server with my friends, and although we had some connectivity issues, considering we are spread all across the globe the multiplayer was incredibly smooth. One catch though (although it seems to be fixed as of a recent update) the time it takes for a player joining the server to download the map can be upwards of 10 minutes for maps that are a mere 6MB.

Usually I have a hard time recommending games in Early Access or I simply say wait and see how things go, but that is not the case with Factorio. There is so much content packed into this game that at $20 there is no excuse not to play it. If you ever get stuck and need some help with more advanced automation techniques, there is always the games incredibly detailed wiki.

Let me know what you thought of my review, thanks again to the developers for providing me a key for Factorio. I have loved every second (so long as I’m not being ganked) of playing this great title. Stay tuned for my Dark Souls III review in the near future. Also if you want to see a spoiler shot of our rocket launching click here.